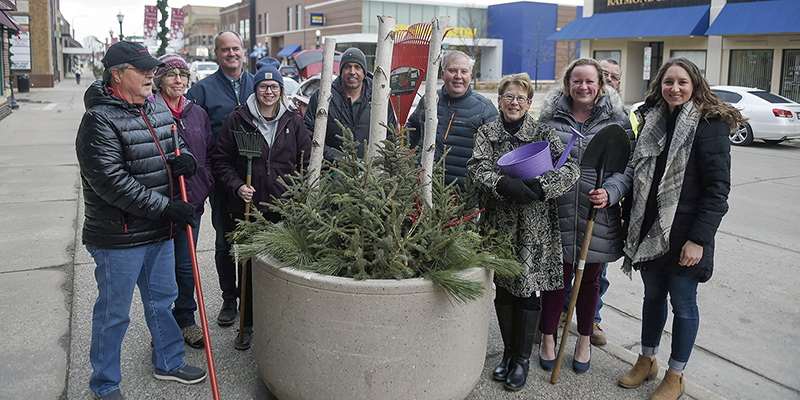 On Monday morning, organizers of Austin’s Flower Basket Program gathered on Main Street to announce changes and updates to this year’s city beautification, which will include an extension of the familiar baskets to the north side of Interstate 90.

This year, a total of 270 total flower baskets — again arranged at Hilltop Greenhouse and Farm of Ellendale — will be placed throughout downtown, including 16 new baskets along 16th Avenue NE, running in front of Hormel Corporate North and The Hormel Institute.

“It feels great to make an addition to the city,” said Gretchen Boldt of Hilltop. “It just brightens the day.”

The program has been going strong since 1995, growing each year from the original 164 baskets that were first placed downtown.

During that time, the program has also taken over the planting and arranging of planters downtown and have extended arrangements into the fall and winter seasons.

“This is our 25th year,” said Bonnie Rietz. “It’s unbelievable that we’ve been putting up flower baskets for 24 years.”

Funding for the baskets will once again come from three sources including the City of Austin, private donations and Hormel.

Rietz said Monday that the city will donate $20,000 and Hormel will donate $12,500, which is up this year to help fund the newly added baskets. The program has also set a goal of $17,000 from private donations.

“Hormel Foods is so happy to see the program continue to grow,” said Savile Lord, Spam Museum manager and community relations for Hormel. “It truly shows the absolute beauty of this community.”

Parks, Recreation and Forestry Director Dave Merrill, in his first year of the position, said he was excited to be a part of such an expansive program.

Anybody wishing to make a donation can send their donations to City Hall ℅ Tom Dankert, 500 Fourth Ave, NE. On the message line people should write “Flowers – 2023.”