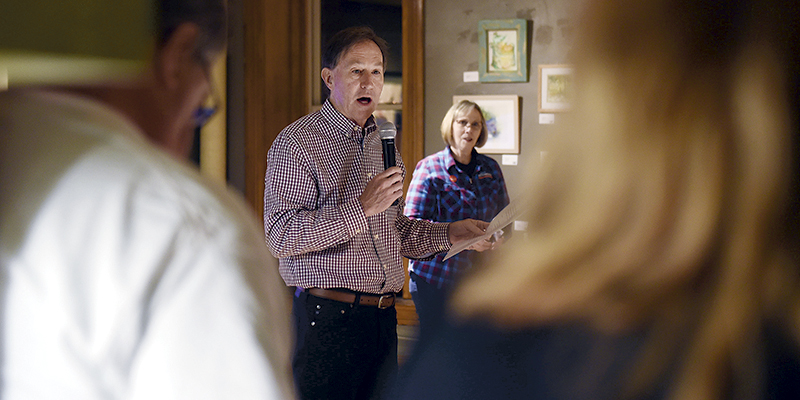 “The voters of southern Minnesota have spoken,” Ettinger said in a statement, conceding the election. “I want to congratulate Brad Finstad on winning the election last night. Though I had hoped to celebrate different news, there is plenty for which to be hopeful.”

In a press release Wednesday morning, Finstad issued a statement on the win.

“I spoke with Jeff Ettinger this evening and thanked him for a hard-fought race,’ Finstad said. ‘Although we have differing opinions, Jeff ran a strong campaign and I thank him for his candidacy.”

Earlier in the evening, at a watch party held at the Austin ArtWorks Center, Ettinger talked about the long road to get to this point in hopes that he would have been able to represent the 1st District.

“It’s going to be different — winning or losing,” Ettinger said Tuesday night. He went on to say that earlier this year he had the opportunity to sit in on some committee meetings in Washington, D.C. and expressed a desire to have a chance to make a difference as representative. “I would love to be back there and be a part of representing southern Minnesota.”

Earlier this year, in August, Ettinger narrowly lost to Finstad in a special election to replace former representative Jim Hagedorn, who died after being diagnosed with cancer.

“Tens of thousands of voters came out today to vote for a common-sense, moderate approach to representation,” Ettinger said in his statement. “While that message did not carry us to victory, I believe that the voters of this district want an approach to governance that represents everyone in the district, not just one part of the other.”

Ettinger said he had a wonderful opportunity to discuss the issues currently being discussed around the nation during the race including the economy, women’s rights and the state of democracy as a whole.

“I am honored and grateful to every single person who supported my campaign, voted for me, and took the time to listen to my message,” Ettinger said.