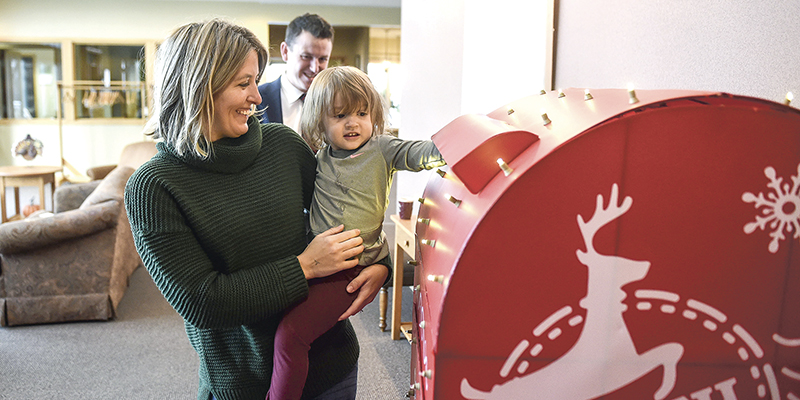 Emily Hoff helps her two-year-old daughter Kate deliver her letter to Santa Claus, demonstrating the new Letters to Santa mailbox that will be placed outside of Worlein Funeral Home for kids drop off their letters. Eric Johnson/photodesk@austindailyherald.com

In a time that maybe we need Christmas the most, Worlein Funeral Home is ensuring kids have a direct wire to Santa Claus through their new Letters to Santa mailbox.

The big red mailbox, complete with lights, will be stationed outside of Worlein Funeral Home starting Friday, Nov. 25 and will be out through Dec. 16. The goal? To ensure kids have access to St. Nick with their Christmas lists.

“We just wanted to do something this year to help give back to the community a little bit,” said Worlein owner Tyler Hoff.

It was Tyler’s wife Emily that discovered the idea while searching online. It’s a way to ensure that there is something fun and easy to do for families during a time of year that’s often hectic

“I was just looking for fun things to do during the holiday season because I know holidays are pretty hard for families in general, so if there is something fun and easy that we can just do that wouldn’t take a lot of time, we should do it,” Emily said. “We’re on a main drag so it’s pretty convenient. They can just drive down. It’s not a huge time commitment.”

Worlein Funeral Home owners Tyler and Emily Hoff stand next to the Letters to Santa mailbox, which will soon find its place outside of the home. Eric Johnson/photodesk@austindailyherald.com

The mailbox itself, was built by funeral assistant Dana Miller, who was able to tap into Santa’s magic to help get the very important letters to the North Pole.

Worlein staff is seeing itself as a conduit to Santa Claus so children can be assured that their letters will get to him. And if they get it to the mailbox early enough then they will even get a response back from Santa Claus before he hurries off on the biggest night of the year.

“It’s Santa’s magic,” Tyler explained. “I think it gives them the portal to the North Pole. Obviously the North Pole is just an idea in their mind, but to give them something concrete to do to connect with that I think just furthers the belief in magic.”

And often, the reward for helping get the important information northward is simply seeing the joy on children’s faces when they get this opportunity to set the letter in motion themselves.

The challenge is not to spill the secret of Santa’s magic to inquiring young minds.

“Dana went to the North Pole and Santa had to teach him how to hook up the magic,” Emily said with a grin.

Letters to Santa also serves another very important purpose and that’s to further connect to the community. Funeral homes already play an important part of any community, but through initiatives like this it’s a chance to extend that reach.

“It’s imperative to be connected to the community and offer these resources,” Tyler said. “It’s nothing involved with the business per say, but just to be a good neighbor, to be a good community member. Austin has been a wonderful town to accept us into. We want to not just take that love, but we want to give it back too.”

The Hoffs are encouraging people that when they drop off their letters to take a picture and post it on Facebook and tag the funeral home for a chance to entered into a drawing that includes a family night pack filled with all sorts of goodies like pizza coupons, a popcorn maker, popcorn, time at the YMCA at the Austin Community Recreation Center and more.

Worlein Funeral Home is also planning a special service this holiday season for those they have served this past year.

This special remembrance will start at 2 p.m. On Dec. 3, and will involve a short message and a candle-lighting ceremony. Attendees will also be given a Christmas ornament with their loved one’s name on it. Invitations will be sent out for the event.

“They’ll come, have a nice little service together and remember their loved ones,” Tyler said. “The holidays are really though that first year after a loss.”