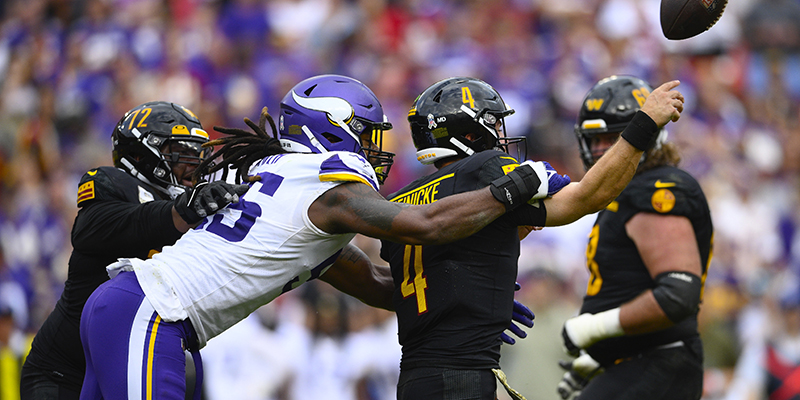 Washington Commanders quarterback Taylor Heinicke (4) gets hit from behind by Minnesota Vikings linebacker Za'Darius Smith (55) during the first half of an NFL football game, Sunday, Nov. 6, 2022, in Landover, Md. (AP Photo/Nick Wass)

MINNEAPOLIS — The Minnesota Vikings have owned the fourth quarter this season, with a plus-33 scoring differential that is the second best in the NFL.

Whether it’s due to Kirk Cousins delivering clutch throws to Justin Jefferson and friends, Za’Darius Smith and the defense applying a fierce pass rush, late-game confidence or plain old good luck, the Vikings have reached the relative midpoint of their schedule on the strength of a series of steely performances in the closing minutes.

They’re on a six-game winning streak, in first place in the NFC North by a stunningly wide margin for a team that doesn’t rank particularly high in most of the basic statistics.

“It’s complementary football that defines good teams in this league,” first-year head coach Kevin O’Connell said on Monday. “You don’t always win with style, but when you’re able to win football games and consistently win close games by winning the fourth quarter, that does matter. We hate to put ourselves in position where you need to come from behind and win, but at least we know we’ve kind of removed all doubt and have belief in ourselves that we can go get those wins when we have to.”

The latest rally was in a 20-17 victory at Washington on Sunday after the Vikings (7-1) fell behind by 10 points early in the fourth quarter.

O’Connell told the players in his postgame locker room address he believed they would win by three points even when they faced the double-digit-point deficit.

“It felt in a lot of ways like our other wins this season where you can’t point to a perfectly played offensive game where everything clicked, but just defense picking us up, special teams picking us up, and then finding a way to make enough plays at the end and finding inches,” Cousins said.

The Vikings, who matched their eight-game start since 2009, have five fewer losses than Chicago and Green Bay. Both the Bears and the Packers have a bye in Week 14, when the Vikings play at Detroit.

Even if they split this daunting four-game stretch that begins at Buffalo on Sunday, the Vikings could well be in position to clinch the division with a win over the Lions on Dec. 11.

“Everybody has been rooting for each other, having each other’s back, and the chemistry on this team is very strong,” Jefferson said.

“Wherever we go down in those tight positions, we count on the next person to help us out and get us downfield where we need to be. This whole year we’ve been stressing that, and we’ve been doing a good job.”

The combination of rush and coverage in new defensive coordinator Ed Donatell’s scheme has been clicking. The Vikings have allowed the sixth-highest per-game average of passing yards (257) in the league, but in the past three games they have a total of five interceptions and 13 sacks. The secondary didn’t miss a beat when cornerback Cameron Dantzler Sr. sprained his ankle and sat out the second half at Washington while rookie Akayleb Evans filled in. The fourth-round draft pick had two tackles for loss and a pass defensed.

Cousins has been pressured a league-leading 85 times in eight games, according to Sportradar data, and while his sack total (16) has remained relatively low the Vikings must figure out how to reduce the heat he’s often faced in the pocket.

Cousins has taken 59 hits this season, per Sportradar, the third most in the NFL. Eleven of those came from the Commanders, the highest single-game total against him in nearly two years.

Smith didn’t add to his NFC-leading total of 8½ sacks — Danielle Hunter had two from the other side — but was constantly in the backfield in the face of Commanders quarterback Taylor Heinicke. Smith was credited with five tackles, three quarterback hits and two passes defensed.

Rookie right guard Ed Ingram Jr. has been responsible for more than his share of those hits and pressures. Commanders defensive tackle Daron Payne used a simple swim move to leave Ingram in the dust for a sack in the first quarter and blew by him in the fourth quarter to flatten Cousins during a 47-yard completion to Jefferson that forced the quarterback to leave the game for one play because the wind was knocked out of him. Backup Chris Reed, who has 29 starts, has not yet been active for a game this season.

After emerging from their Week 7 bye in remarkably good health, the Vikings have begun to have some key players get hurt. Defensive end Dalvin Tomlinson did not play at Washington because of a calf injury, and O’Connell sounded more cautious than optimistic when asked about his status for this week. Dantzler is “probably a long shot” to play against the Bills, O’Connell said.

Minus-13: That’s what Minnesota’s fourth-quarter scoring differential was in 2021, ranking 19th in the league.

Those are four of the top eight defenses in the NFL in fewest points allowed.