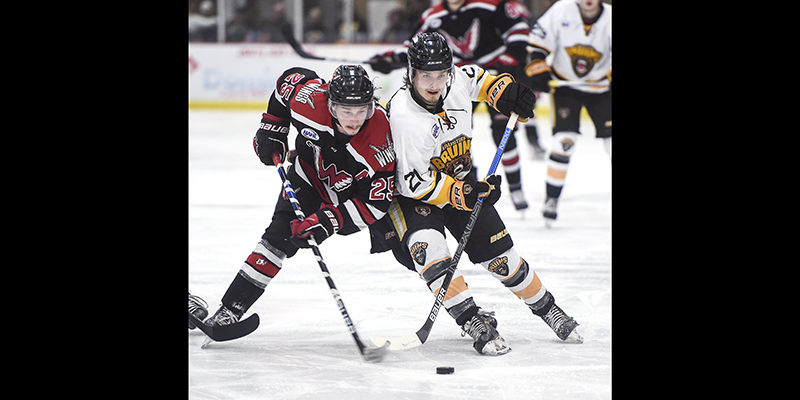 The Austin Bruins Jack Malinski, right, battles with the Aberdeen Wings’ Cade Neilson during the first round of their playoff series last season. Herald file photo

Austin Bruins defenseman Jack Malinski was named Star of the Week for his effort in Austin’s sweep over Minot this past weekend.

Malinksi, 20, was a factor in both wins picking up three assists and a +2 rating for the weekend. On Friday, native of Lakeville had two assists in a 4-3 shootout win. On Saturday, he assisted on the game-winning goal in a 3-0 win.

For the season, Malinski has nine points in nine games played.

“Jack is one of the smartest defensemen that I have ever coached,” Austin head coach Steve Howard said. “He’s our captain and we certainly missed having him in our lineup the last few weeks. It was great to see him come back and help us get two big wins on the road. We are excited that he is being recognized for his efforts this weekend and we look forward to helping him reach his goal of getting an NCAA Division I scholarship.”

Bruins Goalie Trent Wiemken was an honorable mention this week for this 42-save shutout of the Minot Minotauros last weekend.