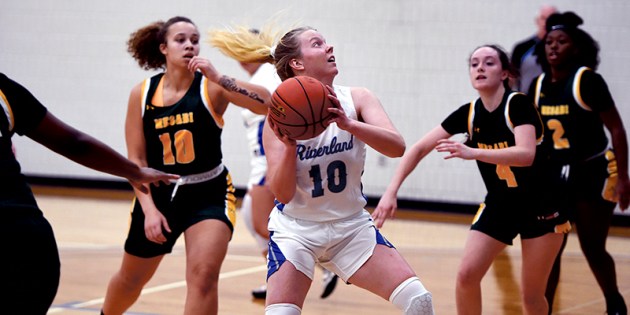 Riverland’s Kenai Holien works inside against Mesabi Range during the second half Friday night at Riverland Community College. Eric Johnson/photodesk@austindailyherald.com 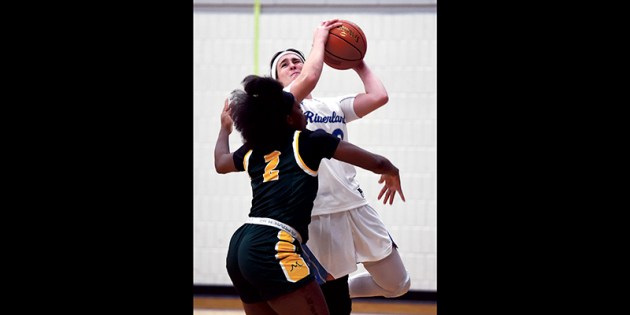 The Blue Devil women’s basketball team has players from near and far, but they all have one thing in common.

They know how to win.

The Blue Devils made quick work of Mesabi Range in a 92-37 win in Riverland Gym Friday night.

Austin grad Reana Schmitt didn’t have to go too far to get to RCC, but her teammate Nora Mecoleta came all of the way from Hondarribia, Spain to become a Blue Devil.

Mecoleta arrived in Riverland by signing up for a recruiting agency in Spain that RCC head coach Andrew Kaiser found her on two years ago. She is feeling much more at home in her second year in the United States.

“I’m feeling a lot more comfortable this year. It’s been great,” Mecoleta said. “It’s different, but you learn a lot.”

Schmitt is fresh off a state tournament run with the Packer girls basketball team and she’s bringing that winning attitude along with her to RCC.

RCC also has players from Arizona, South Dakota and Alaska.

“I’m just learning how to play with this new team,” Schmitt said. “The basketball in the Big Nine was pretty competitive, so that hasn’t been a big change. I think we can go pretty far, we just have to work hard and do our job on the court.”

By halftime, the Blue Devil lead had ballooned to 50-9.