A tradition of respect: Salute to veterans 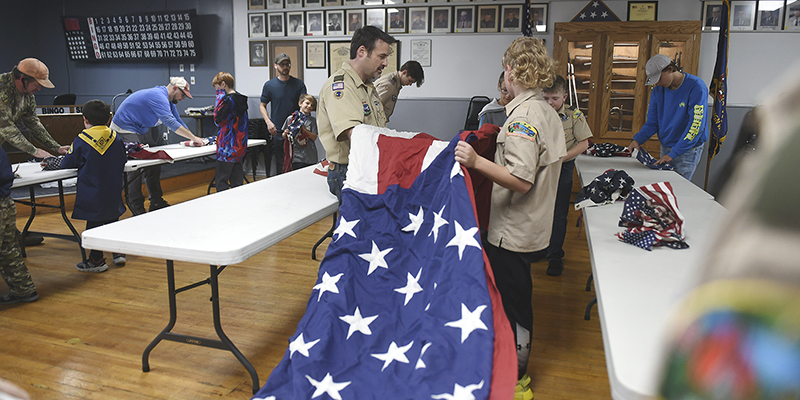 Every year, on Veteran’s Day and Flag Day, the Austin Legion Post 91 and VFW Post 1216 hold a very special ceremony.

The flag retirement ceremony is a way to properly and respectfully dispose of old and tattered flags through the act of burning them.

Along the way, though, the veterans who conduct these ceremonies get help from the local Boy Scout and Cub Scout members. It’s a tradition that goes back years.

“The VFW helped form the first scout troop in the United States so it goes back a lot further than what we’re doing here,” said Post 1216 Commander Scott Wiechmann. “It’s important and it’s rewarding to see a bunch of good kids and parents who are bringing their children up in the right way.” 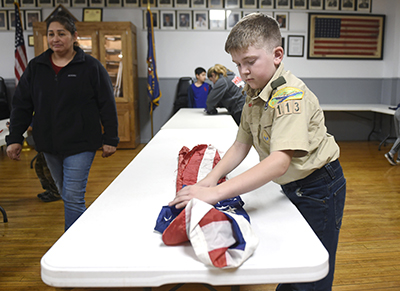 Lucas Schneider folds one of the hundreds of flags being prepared for retirement on Veteran’s Day. Eric Johnson/photodesk@austindailyherald.com

For each flag retirement ceremony, the scouts from Troop 113 and surrounding areas, reverently carry the neatly folded flags to the veterans in charge of burning them, but it’s a process that is more than simply showing up one day to conduct the ceremony.

The scouts themselves are involved from the moment the flags are gathered. On Thursday, Oct. 30, the scouts converged on Post 1216, which takes care of the Veteran’s Day ceremony to sort through and properly fold them.

It’s a process that instills pride in what the scouts are doing.

“They feel proud, a sense of accomplishment,” said Justin Hutchinson, senior vice commander of Post 1216 and scout chairman. “We’ll probably fold 300-400 flags. We try to get them as presentable as we can for their retirement. Big and small. It’s a community service.”

Community service rests at the heart of what the scouts do. It’s a core tenant and fits moments like flag retirement.

But it also presents them an opportunity to mingle and talk with those men and women who served the flag and what it stands for.

It becomes more than just a requirement for the scouts. It’s a chance to be amongst the living history that veterans represent.

“They get a couple things,” said Troop Leader Jeremy Johnson. “First, it is a requirement to learn how to fold flags, duty to the country. Even more so than that is being able to go through and talk to the veterans that are here. Know they are helping out and know what the veterans did. They get a lot out of that.”

It’s a two-way street for the veterans, who get a chance to help these scouts understand the importance of what the flag stands for.

“They get it. These kids understand,” Wiechmann said. “They are having classes on flag etiquette and what it means to fly a flag. They get it because that is what they are learning. We feel that every American child should have a chance to do stuff like this.” 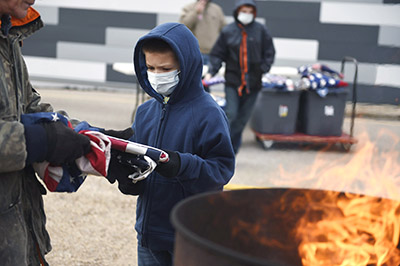 At the same time the veterans get a chance to tell their story, but rather than talk to them directly about the harsher side of serving one’s country, they focus on things the scouts themselves can relate to.

“They want to hear that kind of thing,” Wiechmann said. “When I talk to kids this age I don’t really focus on anything with the war stuff. Just about the fellowship that you build, the guys you’re serving with, just like they do in the troop. The friendships they build and the service and the feeling of pride that you have serving your country.”

It’s something that can be seen growing in the scouts throughout the flag folding and the retirement ceremony itself. The veterans and the adults involved can see the reverence and respect grow.

Often they will come away with a new-found admiration and knowledge that they can pass along to other kids in the Scouts and outside of the Scouts.

“Especially the youngest scouts,” Johnson said. “It’s hard to stand still in meetings. They’re full of energy, but even when they go through the process, you can see them being a little more respectful, a little more quiet and somber then they are in most meetings. Just being in the presence of veterans … they really feel how special the process is.”

Through it all, the scouts are also encouraged to talk with the veterans and interact with them, something the veterans themselves also actively pursue.

The process itself lends to a special kind of interaction that brings two very different age groups together for a common purpose that is cloaked in a somber respect.

“You can apply a lot of scout values to this,” Hutchinson said. “Integrity. Our motto is ‘Do your best.’ This isn’t the easiest flag to fold, but they do their best to make them as presentable as they can. I think it goes really well with the values we try and teach these kids.”