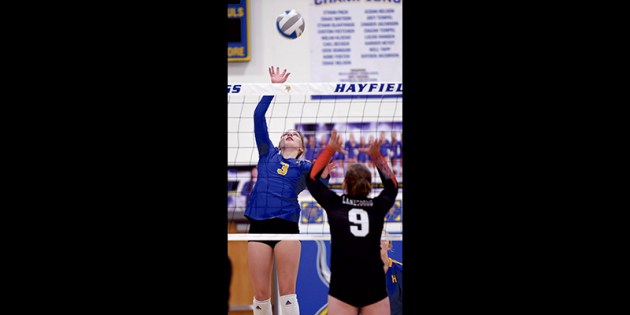 Hayfield’s Reese Bauman reaches for the tip during Thursday night’s Section 1A playoff match against Lanesboro in Hayfield. Eric Johnson/photodesk@austindailyherald.com 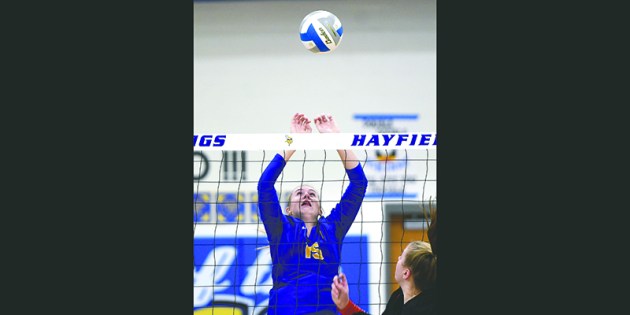 Hayfield’s Natalie Beaver looks up after getting the block against Lanesboro in a Section 1A playoff match Thursday night in Hayfield. Eric Johnson/photodesk@austindailyherald.com 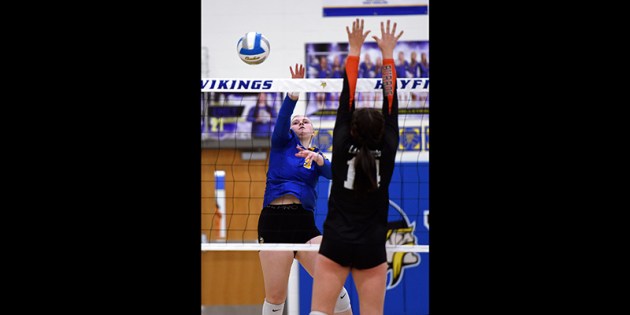 Hayfield’s Allison Meier spikes past a block during a Section 1A playoff match Thursday night in Hayfield. Eric Johnson/photodesk@austindailyherald.com 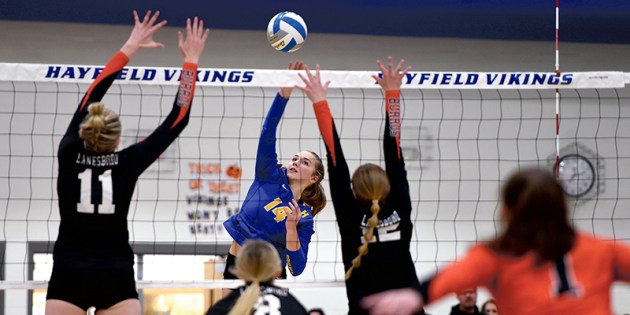 HAYFIELD – The No. 6 seeded Hayfield volleyball team knew it would have to avoid Lanesboro’s twin towers to advance in a tournament opener and the Vikings did just that as they beat the No. 11 Burros (15-12 overall) by scores of 25-17, 25-19, 25-17 in a Section 1A opener in Hayfield Thursday.

Hayfield (20-9 overall) was able to hold off Lanesboro’s Kaci Ruen, who scored her 1,000th career kill early in the match, and Jessie Schreiber to control the pace throughout much of the night.

“All week long we knew (Schreiber) and (Ruen) were their go-tos,” Hayfield head coach Johanna Kruger said. “We struggled with them a little bit last year so we practiced all week on stopping them. We were prepared for them.”

Hayfield senior Reese Bauman helped lead the way up front as she put down 14 kills to go with nine digs and junior Natalie Beaver chipped in six kills and three blocks. Beaver is one of several Vikings who have had to step up since the team lost senior hitter Haeven Skjervem to an injury.

“We’ve all had to definitely take a big step up and contribute more because Haeven did a lot for us,” Beaver said. “Tonight we had to know where (Schreiber and Ruen) were at all times and we had to follow them on defense.”

Hayfield sophomore Breanna Subbert added five kills and six digs. She has given the Vikings a boost since being brought up from the JV team recently.

“We had to bring up Breanna and take her under our arm,” Bauman said. “We welcomed her in and hyped her up.”

The Vikings may be playing a little shorthanded this postseason, but it’s something they’ve grown used to all season. Kruger said her team has used various lineups throughout the season.

“We haven’t had our full team all year and we’ve always had a starter out and we’ve had a lot of different lineups,” Bauman said. “We’re switching things up, but we’re still going strong.”

The Vikings will now take on No. 3 seeded Kenyon-Wanamingo in the Section 1A quarterfinal at Mayo Civic Center at 7:30 p.m. Monday. The Knights swept Hayfield on Sept. 20.

“We didn’t play them very well the first time we played them and we know we can do better,” Kruger said. “It will be a good game against a good team.”

Bauman and some of the other Vikings were able to play in the Mayo Civic Center last season so they know what to expect.