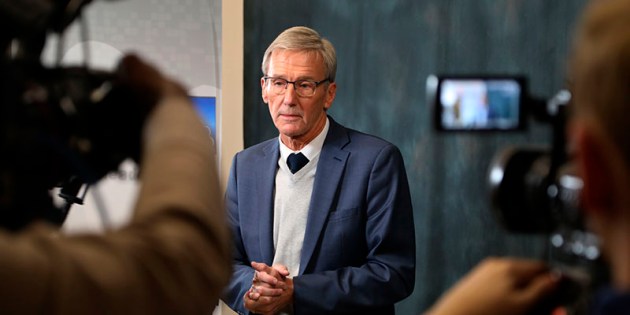 Minnesota Republican Scott Jensen addresses the media at a gubernatorial debate against Democratic Gov. Tim Walz at the studios of KTTC-TV in Rochester, Minn., Tuesday, Oct. 18. 2022. It was their only scheduled televised debate of the campaign. (Ben Mulholland/Gray Television via AP, Pool)

MINNEAPOLIS — Donald Trump has endorsed Republican Scott Jensen for Minnesota’s governor, the second statewide race the former president sought to influence this week as the campaign nears a finish.

Trump said in a social media post late Tuesday that Minnesota won’t have “any more fiery takeovers of police precincts” if Jensen is elected, a reference to a Minneapolis police station burned by protesters during riots that followed the police killing of George Floyd under Democratic Gov. Tim Walz’s watch.

In a statement, Jensen gave the endorsement a cautious welcome in a quote that didn’t mention Trump by name, saying he was “grateful for those who have recognized” his ability to lead.

Democrats jumped on the Jensen endorsement in a statement that accused Jensen of embracing Trump’s “Big Lie” that the 2020 election was stolen from him, and noted that Jensen earlier this year called for Democratic Secretary of State Steve Simon to be jailed over the election.

Trump falsely claimed in his Crockett endorsement that Minnesota elections suffer from “rampant” fraud. He has repeatedly pressed false claims that his 2020 election loss was due to fraud, even though the results have been confirmed by multiple reviews in battleground states, by judges who rejected dozens of legal challenges, and by Trump’s own Department of Justice and top officials in his administration.