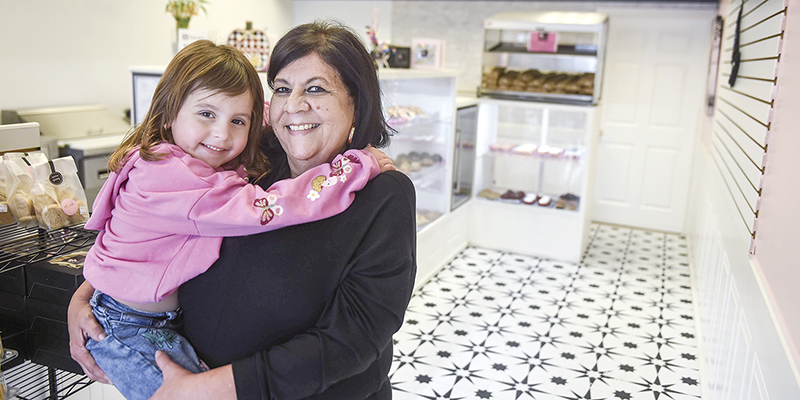 Myrna Rosado and her granddaughter Aliana Klusmeier are photographed in the heart of Bakereach Sugar & Pastry Store, located in northwest Austin. Eric Johnson/photodesk@austindailyherald.com

It’s welcoming with a homey interior and tables situated in front of the windows and along the walls. In many ways, you feel at home.

And that’s all before the smells even reach you, which doesn’t take long. Freshly-made products from Danishes to cakes to breads and coffee are available each day — part of Myrna Rosado’s effort to make sure each customer is treated as warmly as possible.

“It’s very important for us to give the Austin community one place where you can come with your family to take out fresh products,” Rosado said during a rare lull Thursday afternoon.

“She likes to see the people, give them what they want,” her daughter Ana Klusmeier added.

Bakereach is just a few weeks old at this point, having opened its doors on Sept. 16.

Bakereach offers gluten-free options among the many goodies. Eric Johnson/photodesk@austindailyherald.com

Rosado, a former resident of Puerto Rico and Florida, has fallen back on her love of baking in what is a second attempt at a bakery in Austin. The first was stymied four years ago when health concerns forced an abbreviated closure of the first bakery.

But she didn’t let that stop her. Rosado is used to challenges, because she is also a survivor of brain cancer, which when discovered, was a blow she had never seen coming.

“One day before my surgery my doctor explained to me my tumor in my brain was on a very important vessel,” she said. “When the doctor gave me the notice it gave me a shock. I wasn’t prepared to receive that notice.”

Rosado said that initially her chances of survival were low, but in some ways it also acted as a push into the future.

“In Florida, if the doctor doesn’t encounter the tumor, I probably don’t live here and have this bakery here,” Rosado said. “It’s part of history.”

Things like this don’t stop dreams and now healthy, Rosado had a big dream in bringing Bakereach to life.

“Right now, when you have a dream and you love something you work for it every day,” she said. “You work every day for what you want.”

The family-orientated business, complete with her husband Reinaldo, has flourished in its short time of being open. Currently, Bakereach is open Tuesday through Saturday, 9:30 a.m. to 7 p.m., and Sunday 10 a.m. to 5 p.m., but demand has Rosado hoping to expand to seven days a week, hopefully by around the second week of November.

By then she is hoping to have another person to work the front counters.

But you better be fast, because Bakereach’s goods go quickly so it’s also a good thing that there is a wide variety of what they offer.

So many different kinds  of pastries including multiple varieties of Danish alongside apple turnovers. There are cakes — not just birthday or wedding cakes, which are also available — but carrot cakes and cupcakes.

And don’t forget the tres leches cake that doesn’t stay around long either.

Freshly made Danishes wait for customers at Bakereach in northwest Austin. Eric Johnson/photodesk@austindailyherald.com

“Every day we have to make more and more because they just sell,” Klusmeier said.

You can also get a variety of churros.

“Absolutely, every day I make the churros,” Rosado said.

However, one of the best sellers is Bakereach’s bread, which Rosado also makes fresh each day. Both white and French breads are available.

“Our white bread is literally what sells the most,” Klusmeier said.

In turn the bread leads to homemade sandwiches that are also available in house. Salami, ham and cheese, cold-cuts made fresh. The assortment of sandwiches also includes a Puerto Rican sandwich for the truly hungry.

All of these goodies can be had with a cup of coffee that ranges from straight coffee, lattes, cappuccinos and espressos, not to mention the new items added every day, because Rosado believes whole-heartedly in keeping the customer happy.

And then there’s the bakery’s littlest hostess —  Rosado’s granddaughter and Klusmeier’s daughter.

Aliana is an important piece of the pie, often being one of the first to greet people when they come in.

“She receives all the clients here,” Rosado said, beaming. “She opens the door for the clients. She asks, ‘what do you want?’ She will tell them what her favorites are and they will go, ‘okay, I will have one of those and one of those.’ It’s a very important part of our bakery.”

Rosado keeps all the work for Bakereach in-house, taking care of everything from the baking all the way to the marketing and even the signs on the front windows of the bakery.

“I’ve been a businesswoman all my life,” she said. “I worked in a courthouse for 25 years in Puerto Rico. I love business. I love a good business.”

That much is evident just by the example of foods available at Bakereach, the friendly welcome people receive and the deals she has daily.