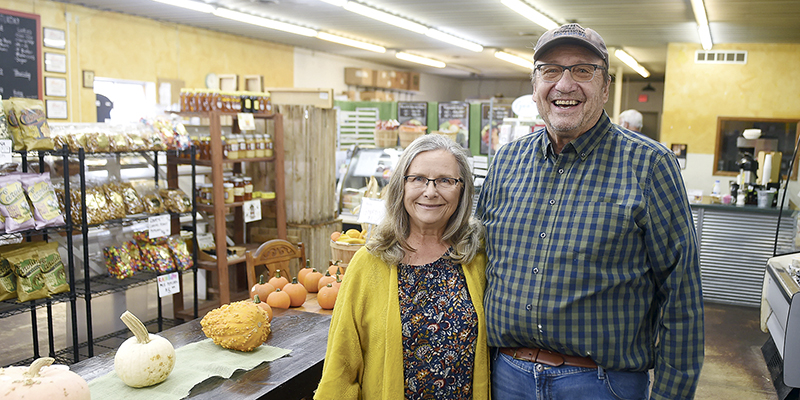 Jim and Merlene Stiles can look back on a long and fullfilling time as owners of Super Fresh in Austin. Jim is joining Merlene in retirement and the sale of the business is in the final stages of being handed over to new owners. Eric Johnson/photodesk@austindailyherald.com

One of the more iconic shopping stops in Austin is about to undergo some changes as its owners finally head toward retirement.

Jim will join his wife Merlene Stiles in retirement and are near to handing the store over to new owners after 42 years of providing Austin residents with one of the more unique shopping experiences in the area.

A place to get baked goods, local foods and plants, Super Fresh is a store many will remember simply by name and a long history that dates back to the 70s.

“I’ve been here for 42 years, but I’ve never sold a business,” Stiles said, sitting in the store people have come to know and love. “I sold a lot of things, but never a business.”

Stiles said the last day for this iteration of Super Fresh will be Oct. 15 after closing out the current inventory. But he also added that the new owners, who have yet to be named pending the finalization of the deal, are hoping to open around mid-November.

“We’re really excited … ,” Stiles said. “Their vision for it is really off the charts and they can carry it out. Super Fresh, it will continue … but will still be a place where families can come and enjoy the plants, the flowers, the atmosphere.”

That atmosphere began with a simple tent set up when it was Prinzings Market in the 40s through the 60s on old Highway 218.

The tent would be up over the summers and from underneath it sold produce before evolving to a building. In 1970, Stiles’ dad, Howard Stiles, bought the business and owned it until 1980 when it changed hands and son took over.

While fresh produce was still sold in abundance, the first greenhouse was added and soon after a few more. In 2000, they moved to their current location as well as buying Bushaw Bakery and including its operation within Super Fresh.

Super Fresh is in the final stages of changing ownership.
Eric Johnson/photodesk@austindailyherald.com

At the time the option made sense.

“Habits have changed,” Stiles said. “[People] don’t eat as much fruits and vegetables. A lot of other options are out there so we added the bakery and donuts and bread and kept busy with that, and also the greenhouses. That’s sort of where it is today.”

Super Fresh was often seen as a destination and meeting space. It’s not uncommon to find familiar faces sitting down for coffee and donuts in the morning.

It’s a warm and welcoming environment that allowed Jim and Merlene to continue supporting local whenever possible.

Whether it’s meat from Nick’s Meats or sweet corn from Honey Tree sweet corn; people were always able to find most anything within the confines of Super Fresh.

But people could also find products from small businesses throughout the state like maple syrup from Duluth or pancake mixes from Red Wing.

“We kept selling those things, sometimes because they aren’t making a lot of money, but because they’re so good and raised by people we know and the quality is just out of this world,” Stiles said.

The sale of Super Fresh has been four years in the making. Despite intermittent offers, Stiles admitted very little materialized.

It wasn’t until he had a  going out of business sale for the garden center that all of a sudden the offers really started coming with a variety of plans from carrying on as it it always has to going in a different direction.

However, now that Stiles is near to finally retiring and joining Merlene, he admits to some surprise at the reaction.

“I was shocked really when we announced we were closing,” Stiles said, becoming emotional as he continued. “People would come in here, telling me stories about coming in with their parents and stuff like that. And seeing all the generations of families that I’ve grown up with here, coming out for Christmas trees. One year they are five-year-old kids and you blink your eye and they have families of their own.”

Owning a business this size can be difficult, ultimately relying on long hours to make it run smoothly, but Stiles ends his time with Super Fresh knowing that it was worth it.

It was always because of the people.

“Just doing something I love,” he said. “Sure there are some days and evenings where you cuss and swear and there are days where you see the people and they are always happy to come out and shop here. It’s just great customers, loyal customers.”

“And the employees too,” he continued. “They’re just out of this world. So dedicated and loyal. We’ve had the greatest people I could work with.”

Stiles said that Super Fresh will always be close to his heart, adding that he wants to be there for the new owners if they need him.

“I’ll support the new owners anyway I can because it isn’t easy and I’m thankful that they are taking a chance and a risk to buy the establishment,” he said. “They deserve all the support of the community and they’ll get it too.”

Stiles isn’t sure what he’ll do with retirement, but he is taking to heart something he learned during a marketing seminar he once took.

“The main thing to remember is to find a goal,” Stiles said. “If something happens that isn’t good, look for the goal. Find the goal and really that’s a sort of life thing too. You have something going on and it’s hard to get through … just look for the goal.”