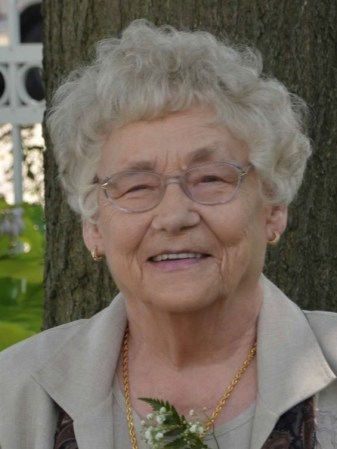 Rosemary Elizabeth Crowley, 91 passed away peacefully on Saturday, September 24, 2022 with family by her side.

Rosemary was born on December 11, 1930 in York, Minnesota. She was the youngest of 4 children born to Goldie and Thomas Murphy. She attended grade school at Queen of Angels and graduated from St. Augustine High School, Austin, MN.

In December 1952 she received a Christmas card from Max Crowley, a boy she’d gone to school with since the 8th grade, asking her to write to him while he was stationed in Korea. When Max returned home the Spring of 1954, they started dating and were married in September of 1954. Together they proudly raised eight children instilling in them their strong work ethic, values, caring natures and Christian Faith.

Rosemary retired from working for the Geo. A. Hormel & Company after 30+ years. After retiring, she enjoyed many years providing day care to her grandbabies while their parents worked. In the late 1980’s she was able to travel with Max long-haul trucking and traveled to every state in the Lower 48. Their last run was an adventure to Alaska.

Rosemary had a fun loving and teasing nature, often singing and dancing while working around the house. She was known to try to cheat while playing cards with the kids, just to see if they were paying attention and thoroughly enjoyed the uproar when she was discovered. As kids, she was known to give us a little pinch to get our attention. “Give them a little pinch” became a term of endearment when she was missing someone and wanted to send a greeting through one of us. Rosemary enjoyed many crafts, including crocheting, macramé, sewing and tending her flower gardens.

The Crowley family would like to extend heartfelt thanks to the caregivers at Mayo Health Systems who cared for Rosemary over the years as well as the caregivers with St. Croix Hospice who provided their expertise and advice during her final hours. The family expresses their appreciation to the aides at Our House Memory Care and a sincere thank you to the staff and residents at Legacy of Brownsdale for their warm and caring welcome. It was wonderful for the family to witness her feeling at home and well cared for, even though her stay at Legacy of Brownsdale was short.

Rosemary’s spirit will forever be in the hearts of all who knew and loved her. She will be greatly missed.

Mayer Funeral Home is in charge of arrangements. Condolences may be expressed to the family online at: www.mayerfh.com.