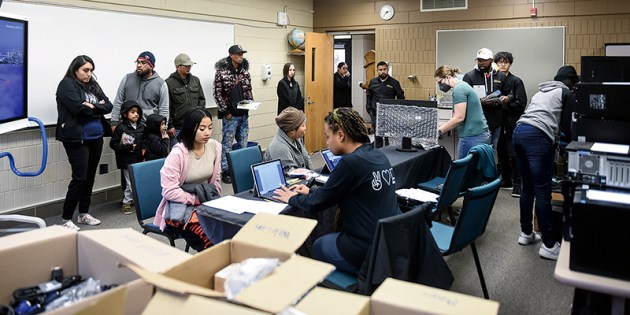 People showed up to Riverland Community College Thursday afternoon to receive computers as part of a distribution that is meant to slim down the digital divide. Eric Johnson/photodesk@austindailyherald.com 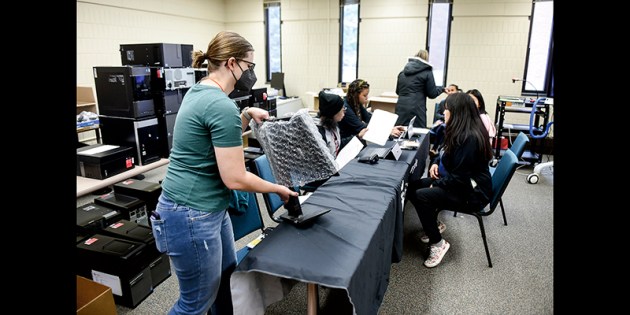 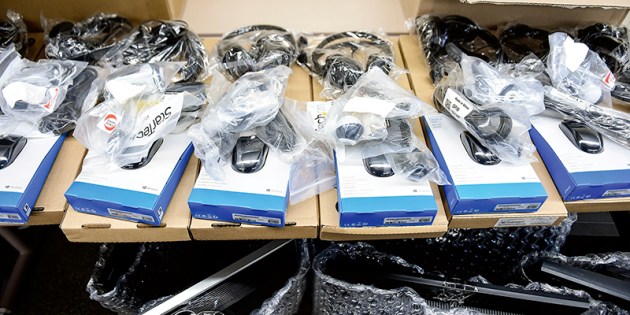 Screens and accessories wait to be handed out during Thursday’s PC distirbution. Eric Johnson/photodesk@austindailyherald.com 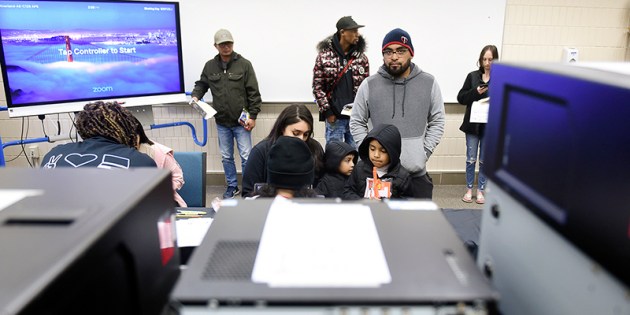 A family waits to receive their PC as part of a PC distribution Thursday afternoon — part of an initiative of several local groups and PCs for People to help close the digital divide.

In a world that can have harmful gaps in technology, a number of organizations in Austin have joined together in an effort to help shrink the digital divide.

With support from a $75,000 Blandin Broadband Communities Program and 50 PCs from PCs for People, a distribution event was held at Riverland Community College on Thursday afternoon to hand those PCs out to people.

“Several agencies in the community decided to get together and figure out how we can shrink the digital divide between people who have access to not only the internet, but types of devices they need for everyday life, whether it be registering for school or a job application, medical records, or keeping in touch with family … whatever it may be,” said Digital Equity Coordinator Jennifer Sims. “Part of being able to do that is having appropriate devices.”

The PCs came separate from the $75,000, with Austin Aspires Executive Director Jayne Gibson saying the money will be used in different projects to further diminish the digital divide.

“I think it’s pretty awesome,” Gibson said. “I think this is a great thing for our community.”

The organization PCs for People takes older machines and phones and refurbishes them, generally selling them at a reduced price.

The group partners routinely with other groups throughout the state to get the computers in the hands of people who need them, but there is more to it than simply distributing the computers.

Gibson said there is also an effort to make sure people know what the next steps are.

“For them to have a device in their home is just so empowering and allows them access to the basic necessities that we take for granted,” she said. “We’re not only making sure they are getting the device, but we’re also working with them to make sure they are aware of the Affordable Connectivity Act so they can get connected to the internet. And then we’ll also make sure they have the knowledge and the skills and comfort in being able to utilize it.”

Groups first started coming together to address the problem around 2019, but the problem soon became magnified.

“Prior to that, several groups were working on approaching digital inequities,” Gibson said. “It’s just been brought to light because there is a greater microscope on it now because of the pandemic.”

The COVID-19 pandemic drove many people inside, with lockdowns preventing people from getting out in the public as much and necessitating a greater emphasis on utilizing technology.

But while cellphones were great at keeping people connected, there were limitations.

“Yes, a phone will help you get connected to a degree, but there is so much you need to be able to do that you can’t necessarily do on your phone,” Gibson said.

The success of the program was highlighted in just how fast the computers went and the overall response.

Sims said that the different organizations, including Austin Aspires, The Parenting Resource Center, Veteran’s Services, Head Start and the Welcome Center, had a two-week window for people to sign up.

Over those two weeks, over 100 people signed up for the opportunity and people were chosen at random to receive computers.

“We had such a great response,” Sims said. “We had over 100 that responded for this first giveaway. I’m hoping in the future we can meet the needs of everybody who applies.”

There is a hope that there can be multiple give-aways during the year.

Nevertheless, not only did the giveaway show a need in the community, but it also showed what happens when community members and groups come together.

“It’s really unbelievable the way people will come together for others in the community,” Sims said. “I’ve been an educator for many years and I’ve known that we live in a great community, but I haven’t seen it in this way and to see so many people willing to join together; to do things like this is exciting and humbling.”