Packers are aiming for the final stretch of the season 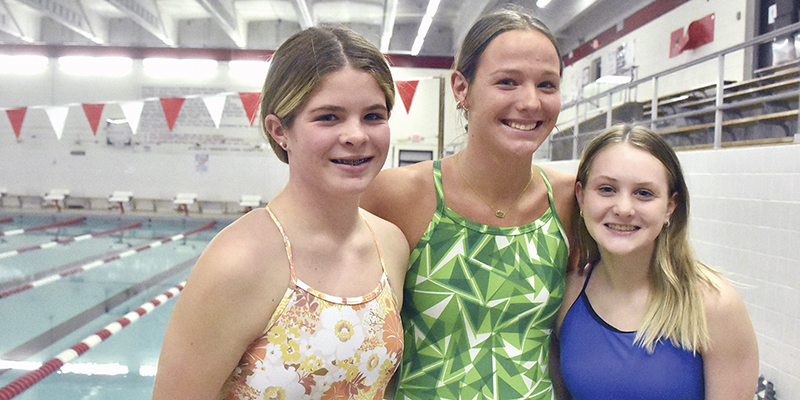 From left, Gracie Greenman, Olivia Walsh and Reese Norton have all stepped up in unique ways to help the Packer girls swim team, which is headed towards the final lap of its season. Rocky Hulne/sports@austindailyherald.com

You’d be hard pressed to find a more fitting leader than the Packer girls swimming and diving team has in Olivia Walsh.

Not only did Walsh advance to the state swimming meet last season, she also played in a state basketball tournament and competed in the state track and field meet.

Now Walsh is hoping to inspire the team’s younger swimmers to help the Packers get a relay team to state — something they haven’t done since 2014.

“We have a lot of young swimmers right now and I think we’ll have a lot of good years ahead,” Walsh said. “We definitely need to keep getting our changes better and more precisely to cut down our time. We also need to keep dropping our splits.”

Greenman has been given an extra boost of motivation by swimming near Walsh in practices.

“(Olivia) stays strong, she finishes strong and she brings a spark. I’ve been pacing myself and working on turns and starts,” Greenman said. “It’s been really exciting for me. I’ve been setting goals and getting to those goals. Our whole team has been pushing themselves to their goal time.”

As a team, the Packers are focused on putting up big performances at the Big Nine Meet this weekend in Northfield and the Section 1A Meet is right around the corner. Another Packer who is hoping to make the jump this year is sophomore Reese Norton, who competed at the state gymnastics meet last year.

Norton already has learned what it’s like to perform under pressure as she saw her teammate Alayna Kennedy go down with an injury on one of her dives at the True Team Meet.

“It was scary. I started crying and I wanted to make sure she was OK,” Norton said. “It’s a good thing that it happened on the true team meet, so she has a chance to get back on the board at sections. For Big Nine and sections, we have 11 dives, which means a lot more dives and a lot tougher dives.”

While she focuses on diving, Norton had to swim a relay with the other divers during the season and she has a new idea of what it’s like to be on the other side of the team.

“It was kind of a fun little thing to try to swim for a few minutes,” Norton said. “It was really fun, but I’ll probably stick to diving. All of the swimmers were way faster than me and I have a lot of respect for our swimmers.”