No. 16 Penn State, Minnesota looking to rebound after losses 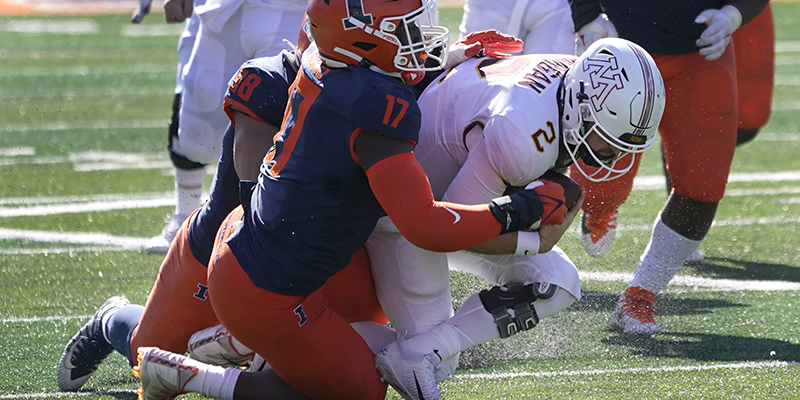 Minnesota quarterback Tanner Morgan is tackled by Illinois linebacker Isaac Darkangelo (38) and Gabe Jacas (17) during the second half of an NCAA college football game Saturday, Oct. 15, 2022, in Champaign, Ill. Morgan was injured on the play and did not return. (AP Photo/Charles Rex Arbogast)

They don’t intend to take anymore beatdowns like the one they took at No. 4 Michigan last week.

“We can say as much as we want to say,” defensive end Nick Tarburton said. “But we’ve got to translate it to the field.”

The No. 16 Nittany Lions (5-1, 2-1 Big Ten) will face Minnesota (4-2, 1-2 Big Ten) at Beaver Stadium on Saturday. They’re hoping a week of corrections will be enough to keep one lopsided loss from snowballing against another team that wants to run the ball as much as possible.

“There’s a fine line between making sure everybody understands that whatever the outcome was not good enough, but also not to the point where it lingers,” Penn State coach James Franklin said. “That is critical. And in this conference, and in our side of the conference, there’s no time for lingering feelings or emotions.”

Minnesota coach PJ Fleck would agree. Like the Nittany Lions, the Golden Gophers will enter Saturday’s rabid, White Out atmosphere in a slump. After a dominant start, they’ve lost two in a row to Big Ten West foes.

Neither team has played good complimentary football lately. Both ran less than 20 plays a week ago in their first halves. Neither has moved the ball much through the air. Both have banged up quarterbacks.

Penn State managed just 111 rushing yards, more than half of which came on one run from quarterback Sean Clifford in the first half. The Gophers, meanwhile, completed just six of 18 passes for 38 yards against No. 18 Illinois.

IN OR OUT?
Minnesota starting quarterback Tanner Morgan is questionable after sustaining a head injury last week at Illinois. Fleck said Morgan will likely be a game-time decision.

If Morgan is out, it’ll be either Cole Kramer, the fourth-year sophomore from Eden Prairie who’s played in 14 career games or Athan Kaliakmanis, a redshirt freshman who relieved Morgan last week and went 2-for-6 with two interceptions.

CLIFFORD’S KEYS
Quarterback Sean Clifford appears poised to make his 40th career start on Saturday. That’s despite not finishing the 41-17 loss at Michigan and Franklin saying he was “hurt” afterward.

True freshman Drew Allar relieved the sixth-year senior after Clifford took a handful of hits from the Wolverines. Earlier this week, Franklin dismissed the idea of switching quarterbacks for the sake of prepping the coveted prospect Allar for the future.

“That’s the wrong message,” Franklin said. “Sean has earned the right to be on the field. That doesn’t mean that Drew hasn’t done some good things. Would we would love to get him an opportunity and continue to grow and develop him for his future? No doubt about it.”

Clifford’s 62-yard run in the second quarter set up a touchdown and was the Nittany Lions’ longest play of the day in Ann Arbor. He was just 7-for-19 passing for 120 yards.

The 39% completion rate was the lowest of his career in a game where he attempted at least 10 passes.

STAGNANT GOPHERS
Minnesota is averaging 6.6 yards per play this season, ranking 30th in the FBS. That mark took a tumble in the 26-14 loss at Illinois. The Gophers averaged 4.3 yards per play against the Illini. They have 17 passes of 20-plus yards this year, but none last week.

Offensive coordinator Kirk Ciarrocca challenged the pass catchers to be more aggressive on their routes at Penn State.

“We have to develop the ability to make more explosive plays,” Ciarrocca said. “I just want to see them get back to that mindset, that determined mindset, that committed mindset that it takes to continue to grow and get better.”

He’s leading the Big Ten with an average of 27.6 yards per kickoff return. His 92-yard return to start the second half at Illinois set up a touchdown that gave Minnesota its only lead of the day. Redding is also averaging 6.8 yards per punt return.

The Gophers have raved about Redding’s speed and strength. Fleck said he can squat 550 pounds.