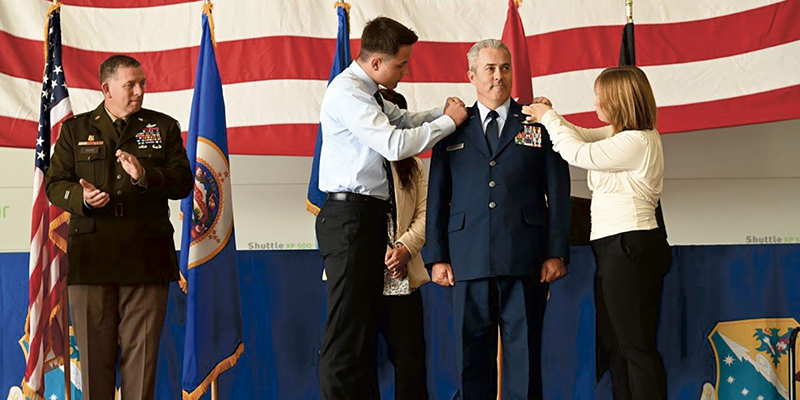 Photo by Airmen 1st Class Tylin Rust: Brig. Gen. Chris Blomquist is pinned by his children during a ceremony on Sept. 10. Photo provided

Chris Blomquist, the new Chief of Staff of the Minnesota Air National Guard, was promoted to  brigadier general during a ceremony at the 148th Fighter Wing, Duluth, Minnesota, in front of  family, military leaders, community leaders, and 148th Fighter Wing members on Saturday,  Sept. 10.

“In your new role as the Chief of Staff of the Minnesota Air National Guard, you are charged  with inspiring over 2,200 Airmen at Minnesota’s two flying wings,” said Minnesota National  Guard’s Adjutant General Army Maj. Gen. Shawn Manke.

Cohesion is high on Blomquist’s list of priorities as he assumes this new role.

“My goals are to continue improving the organization at a level that extends to both Wings and  Joint Force Headquarters,” he said. “I want to bring more jointness or collaboration between the Air and  Army. I want to give everyone an opportunity to reach their highest potential and improve the  Air National Guard by doing so.”

Blomquist served as commander of the 148th since 2017, where he oversaw two significant  mobilization cycles in 2018 and 2022 that deployed nearly half of the Wing’s more than 1,000  airmen overseas to southwest Asia. During his command, Blomquist and the 148th were faced  with unprecedented state missions including COVID-19 pandemic support, support of  Minnesota floods and civil unrest in the metro, and sending members to conduct security at the  59th Presidential Inauguration.

“We prioritize people, modernization, and partnerships. I’m excited to help bring my experience  in basing discussions and national-level advocacy for modernization to our Air Wings,” Blomquist said. “I look  forward to building and strengthening more partnerships across the State with our military,  businesses, and civilian and governmental organizations,” he said.

Blomquist believes a change in pace will help him and the organization be successful.

“Instead of always being on mission and trying to maximize scarce resources for a Fighter Wing, I’m able to take the time to think and act more strategically and long-term. I can do that for both  Air wings now and have the luxury of having a bit more time to think critically and act in the  best interest of the Minnesota National Guard,” he said.

Blomquist is replacing Brig. Gen. Sandy Best, who recently retired after 38 years of service to  the Minnesota National Guard.

“I look forward to meeting more of our Airmen and Soldiers across the State of Minnesota,” he said. “I’m  excited to enhance partnerships that ultimately help take better care of our members, their  families as well as our State and Nation. I think I bring a unique perspective to modernization  for our Air National Guard and hope to have lasting impacts for the good of our organization.”

As a General Officer, Blomquist is no longer authorized to fly Minnesota National Guard  aircraft, and he already misses flying.

“I was able to retire from flying fighters at the top of my game which is reassuring. My last  flight was instructing our newest fighter pilot in a lot of complex mission tasks,” Blomquist said. “I felt like I still  had more to give, but flying fighters doesn’t get any easier when you’re in your third command  role or at 50! So, as much as I’ll miss it, I look forward to being able to concentrate 100 percent  of my efforts on improving the entire Minnesota Air National Guard.”