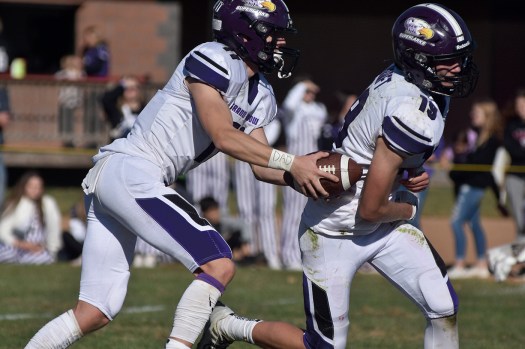 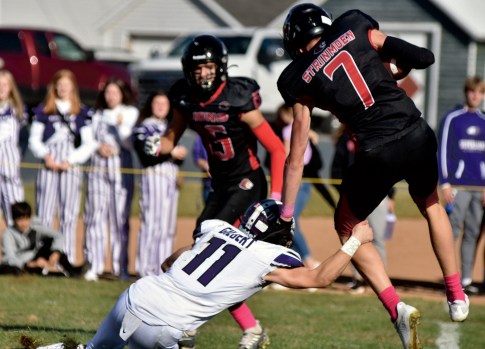 Not all victories show up on the scoreboard and not all scars are visible.

Grand Meadow senior Cael Gilbert looked like just another senior high school football player playing his final game in Spring Grove this past weekend, but his story runs much deeper than the 47-6 loss the Superlarks suffered.

Gilbert was not only playing the game with low sprains on both sides of his ankle and a strained achilles, he also lost his father and grandma unexpectedly within the last year. His grandma passed away in August of 2021 and his father Troy Gilbert passed away in January of 2022, which meant this was Cael’s first season without his dad on the sidelines.

Cael, who wore tape on his arm labeled “DAD” during Saturday’s game, said it was extremely tough for him to leave his house on the first day of football practice in August, but he’s glad he played out his final season with the Superlarks.

“My dad was my first ever coach in football and wrestling,” Cael said. “He was always the first person to teach me that when you get knocked down, you’ve got to get back up. The biggest thing for me this year was playing for him, along with playing for my teammates. I played how he would’ve wanted me to play.”

Cael dealt with multiple injuries this season and playing through them was the most physical pain he’s ever felt on a football field. He found the will to keep going by remembering how his dad instilled the idea of maintaining a positive attitude and effort, while not sulking.

“That last game was all about who I wanted to be remembered as as a player. I didn’t want to be that guy that’s sitting on the bench in the last game of his senior year,” Cael said. “I wanted to be remembered as a tough son of a gun who fought through injuries and my dad’s passing away. I want to be looked at as a tough kid, even when I was getting injured and flat out getting my butt kicked.”

Cael may have been able to fight through the physical pain, but the emotional pain has been a lot to deal with for a high school athlete, who lost many opportunities due to the COVID-19 pandemic right before losing two crucial family members. Cael also lost his sophomore and junior seasons of wrestling due to injuries and he may not even wrestle this winter because of his ailments.

“I’ve dealt with a lot more than a lot of 17 year olds have to,” Cael said. “I’ve had a lot of things that I’ve dealt with that a lot of people don’t know about. I believe in God and that there is a plan for all of this. Everything happens for a reason. I also have a lot of friends and family who have been extremely helpful.”

If Cael does not wrestle, he’ll be in the weight room this winter. He has a big interest in playing college football and he has been in contact with a few Division III schools.

“Either way I’ll be doing something,” said Cael, who played quarterback and defense for GM. “I’m not going to be sitting around on the couch, that’s for sure.”

Whatever Cael does in the future, he’s going to serve as an inspiration to those around him and he is going to honor the memory of his father. It is rare to see kids as driven and motivated as him, even after all he has gone through.

While GM’s season may be over, Cael is definitely a winner.