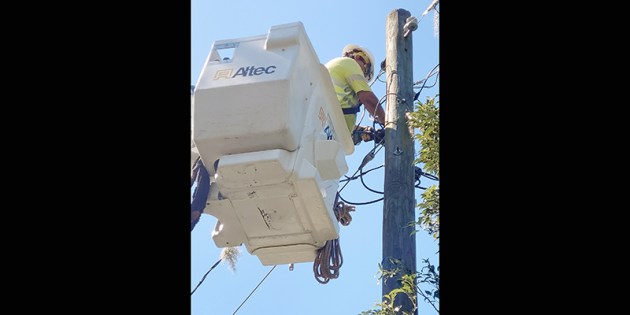 Jeff Martinson works on a line as an effort to reestablish power to Bartow, Florida following Hurricane Ian. Photo provided 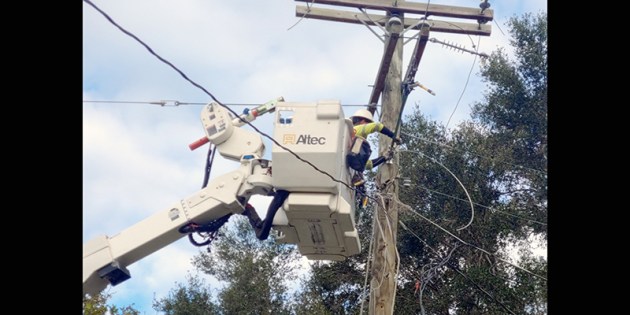 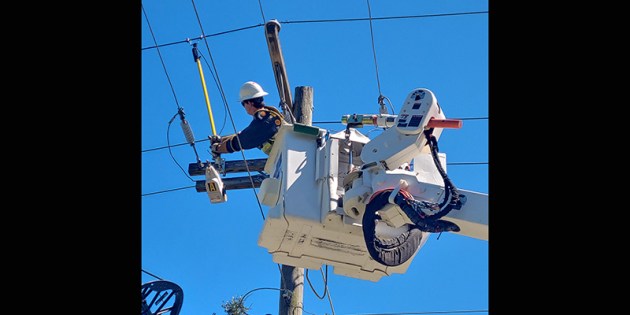 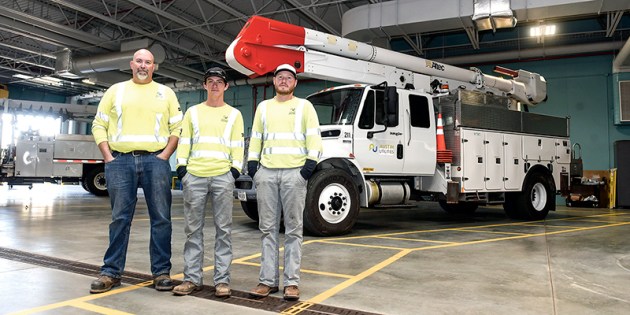 Austin Utilities lineman Jeff Martinson, from left, Dillon Sprague and Trevor Herfindahl returned recently from a stint in Florida helping to get power up and running in the aftermath of Hurricane Ian. Eric Johnson/photodesk@austindailyherald.com

When Hurricane Ian made landfall in Florida in late September; its damaging winds and large amounts of rainfall caused extensive damage across the state.

In its aftermath, over 60,000 utility lineman from across the nation descended on the beleaguered state, helping restore power across its breadth.

Among a large contingent of Minnesota lineman to make the trip were three Austin Utility lineman: Jeff Martinson, Trevor Herfindahl and Dillon Sprague.

“We were changing broken polls, putting wire back in the air,” said Martinson, who had made the trip before when Hurricane Irma struck Florida in 2017, causing $77.16 billion in damages. “Half the wires came down because of trees.”

The Austin trio left Austin on Sept. 28, the day Ian made landfall, with a 55-foot bucket truck and one crew cab truck for carting away debris.

All told they were in the state for 10 days with their work taking place in Bartow, Florida, a community that was comparable to Austin in terms of size and system.

“It’s a very similar size,” said Bill Bumgarner, electric distribution supervisor for Austin Utilities. “Population is right in the same size and system voltage and the way their system is set up is similar.”

Bumgarner said that it was an ideal place for the three AU lineman to be put to work, given that Bartow’s system is a 13,800 volt system while Austin’s is 12,500 volts.

While many lineman from around the nation had already arrived prior to storm-fall, Austin’s volunteers arrived after the storm had hit, meaning they could go straight to work.

“Right away,” Sprague said. “There were 60,000 lineman staging before us. We went straight there.”

Ian made landfall on the southwest side of Florida, where it wrought the worst of its damage. Bartow is further inland, due east of Tampa Bay, and while it received a good punch it wasn’t to the degree that much of the southwest part of the state suffered.

In short, it wasn’t anything the three lineman hadn’t seen before from Minnesota storms.

“There was plenty of work,” Sprague said. “Some of these guys were sent here because they had so many staged.”

Still, most Bartow was without power and so its residents were just as appreciative when the power was brought back on.

“Car after car was stopping by asking us if we needed anything,” Herfindahl said.

The three that went to help with Ian weren’t the only ones to have responded to such an incident. Over the years, AU has seen many of its lineman take the opportunity to respond to a hurricane.

The Minnesota Municipal Utilities Association organizes these trips and crews from Rochester, Brainard, Marshall and Owatonna — just to name a few in the state — responded.

Martinson said that there is a list of lineman willing to go should the need arise.

For AU, the timing proved beneficial as many of the bigger projects in Austin had already been completed, making it easier for lineman to answer the call.

“We’re always very supportive to go help out,” Bumgarner said. “It’s great for the people on the receiving end, but it’s good for our people to experience and help out. It’s something you never forget.”

“Overall, from the standpoint of lineman, that’s kind of in their blood,” he said. “I think it’s great and we don’t usually have to ask too hard. They get some great experience working with people in other areas.”

While the work might be important, all three echoed the point of just being able to lend a hand and help others.

“It’s just kind of being a part of something greater,” Herfindahl said. “When the power came on, people up and down the street came out and yelled.”

“It feels great to to get the power back on,” Martinson said.