Growing on the gridiron: Austin’s Halsey has pushed himself to new levels at UWRF 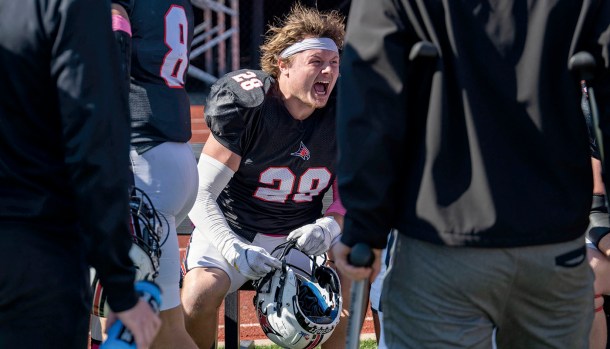 Austin grad Jake Halsey is fired up before a game with the UWRF Falcons. Photo by Pat Deninger or UWRF Athletics 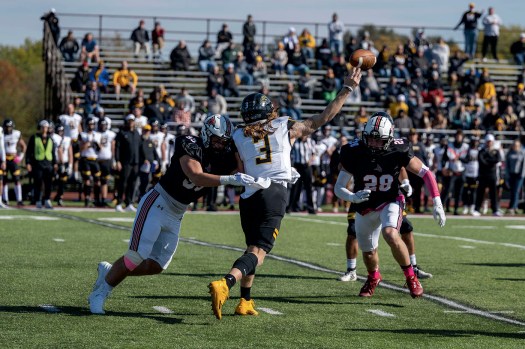 Austin grad Jake Halsey has learned a lot while playing for football at Division III University of Wisconsin-River Falls and it’s all paying off as he is playing an important role for the Falcons,

Halsey, a 6-foot, 4-inch, 250-pound senior, has come up with two sacks, two blocked kicks, a fumble recovery and 18 total tackles for the Falcons (4-2 overall) who were ranked No. 14 last before falling 21-14 to UW-Platteville on Saturday.

Halsey has seen a big attitude change in the Falcons this season as the program is on the rise.

“It’s been a crazy ride so far. The attitude everyone has on the team now is a full 360 from what it was when I came in. We play with confidence and a chip on our shoulder everyday at practice and week to week with our games,” Halsey said. “Running the ball is not an option for opposing teams with our new defense which puts teams into hard situations.”

It’s been a long journey for the Falcons, who finished 2-8 overall and didn’t play a game in 2020, before going 9-2 overall last season. It’s also been an uphill climb for Halsey, who took a redshirt year and played on the scout team in his first year at UWRF.

“It’s hard to go from being one of the best on the team to being average at best in college,” Halsey said. “There had been times where I thought to myself ‘can I really do this?’ But the friend group I had made and the family that was built on the team kept me in for the journey we are on now.“

Halsey has enjoyed growing as an athlete and he’s relished the chance to play in big games, but he also has a vast appreciation for the bonds he has formed with his teammates. Every year, the team brings in around 60 recruits, and all of them are welcomed with open arms.

“The rewards of playing at the college level has been the amount of brothers I have gained. Each year we preach being family in the locker room and outside the locker room,” Halsey said. “No matter where you came from or who you are, we all take care of each other and nobody is alone.”

Halsey, who graduated from AHS in 2018, has played in 22 games at UWRF and he has amassed a total of 53 tackles and five sacks.

UWRF has four games remaining in the regular season, including a matchup with UW-Eau Claire in RF at 1 p.m. Oct. 22.