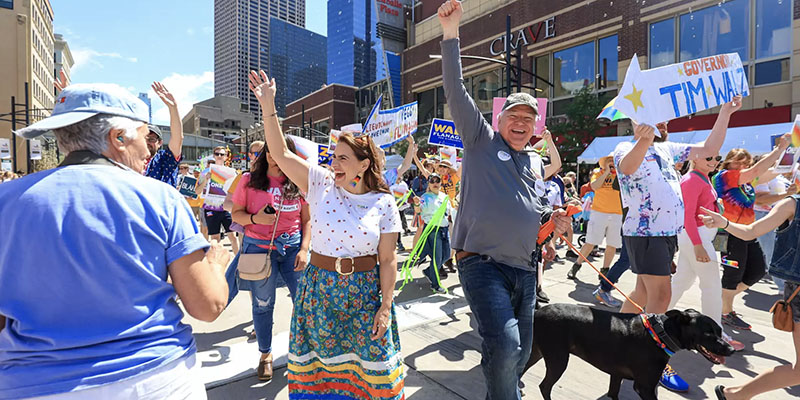 Election Day is about a month away, and get-out-the-vote efforts are picking up.

DFL Gov. Tim Walz and Republican nominee Scott Jensen are out and about. But where the top candidates are showing up, who they’re talking to and what they’re saying? That’s becoming harder to track — in many cases for strategic reasons.

Walz addressed a couple of big unions earlier this week — one representing nurses and another state employees. Neither event was open to the press or the public. Jensen shook hands and gave remarks at party gatherings in Plato and Brooklyn Park that the campaign didn’t broadly advertise in advance.

“The Walz-Flanagan campaign is leaving no stone unturned in 2022,” Forsyth said, describing the governor’s travels “from Moorhead to Worthington, St. Paul to Cloquet and everywhere in between.”

Jensen and his running mate, Matt Birk, are also on the move. In the past couple of weeks, they’ve headlined rallies, popped in on homecoming tailgaters and made other campaign stops from Winona and Fergus Falls to the Iron Range.

But as time ticks down in their contest, both camps are increasingly wary of unscripted moments. The candidates risk a confrontation, a flub or a maybe remark that goes sideways on them.

Walz had to backtrack a couple of weeks ago when he seemed to suggest a judge presiding over a food-fraud case should be investigated for his rulings. He was pressed by reporters at an event on another topic. It led to days of follow-up questions and loads of criticism from the governor’s political opponents.

Likewise, footage surfaced of Jensen talking recently about litter boxes in Minnesota schools for children to use, which is an internet hoax.

Jensen was speaking to a rally in Hutchinson. It was advertised in advance and a DFL operative was there to catch it on tape and get it out into the news cycle. Jensen hasn’t commented on the episode since, but Democrats have used it to question his credibility.

One off-message moment can knock a campaign off kilter for days. That’s why campaigns work overtime to connect with supporters or potential voters in pre-recorded messages or controlled events.

Neither campaign for governor releases a full schedule.

Walz has a public events schedule as part of his official duties. It includes self-selected appearances, only some of which are publicly accessible. Precise location details are usually excluded and available to the media upon further request.

His campaign appearances are handled separately. Notification of them frequently comes through videos, photos or tweets posted after the fact.

There is no events page on the Walz campaign website but it does have a “get involved” tab that requires users to provide contact information to get updates. There is an events link on Jensen’s site, but it also requires sign-up.

Jensen tends to advertise his rallies and other appearances on social media in hopes of building a bigger audience, making it slightly easier to stay on top of his whereabouts.

Jensen, who lacks the money that Walz does for TV ads and other outreach, has criticized Walz for not being accessible. He notes that there will be only three debates during the campaign — including two later this month — which is fewer than in the recent past.

He repeated the charge this week while appearing on the show of conservative broadcaster Charlie Kirk.

“Tim Walz might be hiding in the bunker. He might spend $12 million to demonize Scott Jensen as some sort of extreme character,” Jensen said. “But the fact of the matter is, Charlie, six years ago, I was ‘family doctor the year’ in Minnesota. I’m not an extreme guy. I’m a family doctor who likes to solve problems.”

Speaking on behalf of Walz, Forsyth said Jensen has transparency problems. He said Jensen has ignored questions about “dangerous statements” he’s made about transgender youth and other topics and that the GOP ticketmates refuse to release their tax returns as past candidates have done.

With the early voting period now almost two weeks old, there’s a combination of voter persuasion and mobilization at play.

Particularly on the weekends, there are organized door knocks by the campaigns in areas where they are working to nudge likely voters for their candidate.

This weekend, Jensen’s team is concentrating on Champlin, Chanhassen, Eagan, Woodbury and Vadnais Heights, for instance.

In the smartphone era, that’s easier than it used to be. There are call centers organized by the parties or campaigns, but people can also do it from their couch thanks to software and apps that load numbers into volunteer phones to make those calls a cinch.

For Walz, there are phone banks almost nightly led by units of the DFL Party, labor unions or allied groups.

If you’re identified as a probable voter for him, you might get many calls or texts between now and Election Day.