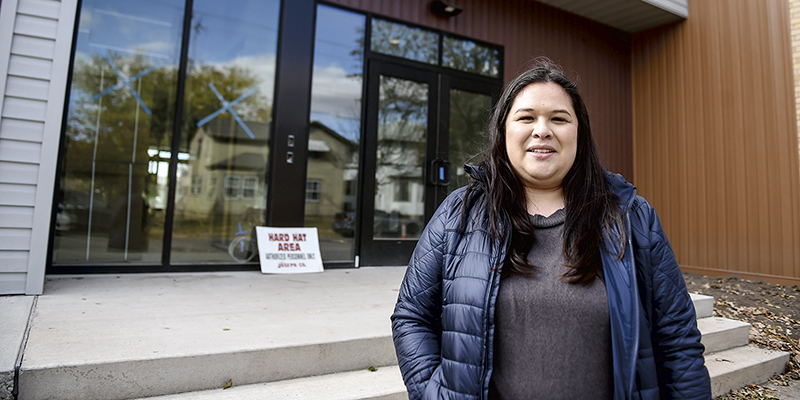 Gema Alvarado-Guerrero stands outside of the still under construction Community Action Building Monday afternoon. After nine years with the Parenting Resource Center, six of those as its director, Alvarado-Guerrero has stepped down from her position in order to pursue other avenues. Eric Johnson/photodesk@austindailyherald.com

Gema Alvarado-Guerrero steps down as director of PRC, looks back at her time

Gema Alvarado-Guerrero has become one of the most recognizable faces in Austin through her work with the Parenting Resource Center.

A devoted presence in social work, Alvarado-Guerrero has dedicated nine years to the PRC and has been director for six of those years.

However, Alvarado-Guerrero is moving forward and has stepped down as director, even though she is currently still working at the PRC on an interim basis.

“I really like to work at the system level of change,” Alvarado-Guerrero said Monday as she looked back at her time. “I do really like working one-on-one as well.”

“For me it’s advocacy,” she added.

After graduating from Riverland Community College in 2013, Alvarado-Guerrero went on to get her bachelor and masters degrees at Walden University. The same year she graduated from RCC she joined the PRC.

Currently licensed as a social worker in the State of Minnesota, Alvarado-Guerrero gravitated to the profession because of the help her family once received.

“I’ve always had people who helped me and my mom growing up,” she said. “When I started a family I needed a lot of helping hands. I feel like it was a way to give back.”

That background has been a benefit for Alvarado-Guerrero, who has used her experiences to drive her professional endeavors.

The marriage of the experience with PRC has been a perfect nexus.

“Oftentimes, when we see an issue at a community level I feel I have insight in the narratives of people we help,” she said. “I liked to be there.”

“I’m leaving now a job I’ve been at for nine years, but I feel the experience … I feel like I really hit a home run with this job because it also let me meet a lot of great people,” Alvarado-Guerrero continued. “It makes you come home knowing you made a difference, I think.”

That was perhaps most noticeable in the development and building of the Community Action Building, which will house the Parenting Resource Center, Welcome Center, Michael H. Siebel Family Visitation & Exchange Center and Children’s Dental Health Services.

Originally slated to open in September, the building looks to now be completed in November. Alvarado-Guerrero took a quick tour of the building Monday, showing off what people can expect when the building finally opens.

It’s been a long held goal  for Alvarado-Guerrero to make this building a reality.

“It’s been a dream come true,” she said. “I know it has been a dream of mine since 2018. To see an idea to fruition and know there are community members that really supported me … what the PRC does in the community is vital.”

But this dream took work and required time spent away from home. Alvarado-Guerrero said it wouldn’t be possible without the support of her own family.

“I don’t think I would have been able to do my work if it wasn’t for my mom and husband and two very understanding boys,” she said. “Because there is work to do. There were a few years I worked Thanksgiving Day and Christmas Day for exchanges. It was never a question for them that mom was going to be gone for a couple hours.”

“I’m going to regroup,” she said. “I’ve been going full force for the last decade.”

The PRC has now begun its search for a new executive director, which will oversee the PRC, Catherwood Home Care, The Siebel Center and Welcome Center.

Alvarado-Guerrero hopes whoever is hired continues to work within the warm team-work inspired atmosphere that is current today.

“What I’ve been telling folks is that I came into the organization when it was a different life stage,” she said. “The PRC team, who is there now, is very relational. We run a lot on trust. I think that’s the next thing for the next person. Trust is very important. That’s been the secret of success.”