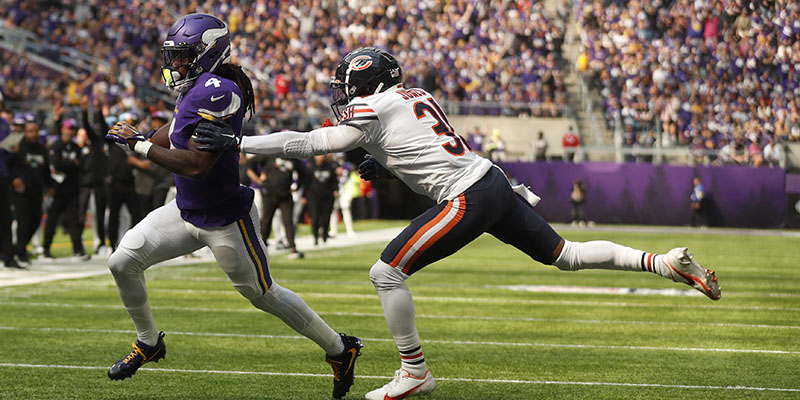 Minnesota Vikings running back Dalvin Cook (4) scores on a 5-yard touchdown run ahead of Chicago Bears cornerback Jaylon Jones (31) during the first half of an NFL football game, Sunday, Oct. 9, 2022, in Minneapolis. (AP Photo/Bruce Kluckhohn)

MINNEAPOLIS — Dalvin Cook took the handoff to the left, burst through a big hole between the center and the guard, then made a slick cutback to evade an arm tackle and veer right.

Finally, he was free.

Cook raced untouched the rest of the way for a 53-yard touchdown to help Minnesota finish off Miami on Oct. 16 before the Vikings had their bye week.

He punctuated the moment by hurling the ball into the seats behind the end zone — more on that later — and soon after that was celebrating a 24-16 victory in his hometown that raised Minnesota’s record to 5-1. The Vikings host Arizona on Sunday.

That scamper through the Dolphins secondary was Cook’s first rush of more than 15 yards this season. He had a 23-yard reception on Oct. 9 against Chicago.

“We know what the ground game is. It’s a 3-yard, 4-yard fest, and then everything comes to light,” Cook said. “But when those big plays hit, we try to take advantage of them.”

Cook is 10th in the league with an average of 75 rushing yards per game, well on pace for his fourth consecutive 1,000-yard season. But he’s still finding his footing in the new offense under coach Kevin O’Connell that follows more of a pass-first approach than Cook’s previous play-callers. Cook has not yet topped 20 carries in a game, after doing so 25 times over the previous three seasons.

“I think being consistent throughout the game is what we’re hunting,” Cook said.

Cook received the obligatory fine from the league for his ball toss into the crowd and, according to an NFL Network report, can have it reduced by 25% to $5,941 if he completes an online training course and avoids further fines this season.

“I’m going to look at it as something normal, throwing the ball into the stands, but that’s how the league works. I abide by their rules and you deal with the consequences, I guess,” Cook said.

Cook spent one night of his bye week watching basketball, with a courtside seat for the Timberwolves season opener. His agent, Zac Hiller, was on his right. On his left was an unexpected — and rather hairy — guest. The sasquatch mascot for local meat snacks retailer Jack Link’s sat down to make a scene for the crowd.

“He told me he’s from down South — and his whole operation,” Cook said. “What he has going on and how he keeps his body cool and everything is kind of crazy. He has like 12 ice packs under his suit.”