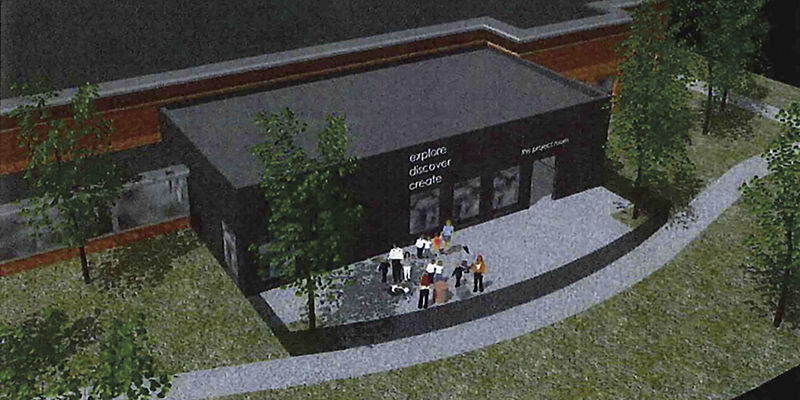 Perhaps the biggest part of the library project is expanded project area that will feature an outdoor space. Photo provided

Despite bids taking an unfortunate spike regarding the new library addition, the Austin City Council Monday night moved out of a work session money to help account for the increase.

In a report from the library’s Executive Director Julie Clinefelter Monday night, the library saw a $1 million increase over original estimates of around $680,000. Clinefelter said that while they knew the price would be over that estimate, likely do to current market challenges, they were taken aback by just how far over the estimates went, especially considering that there was only one new addition and that was an updated alarm system.

However, Each planned item changed in scope as planning went forward.

“Other items grew as details were hammered out,” Clinefelter said after Monday night’s meeting. “For instance, the restroom remodel came in much higher in part because of ADA compliance.”

Four bids provided to the council ranged anywhere between $1.6 million and $2 million.

Current funds on hand, generated through grants and fundraising, sit at around $892,000, leaving them short by around $700,000.

However, in the end the council agreed to push that $700,000 toward the project to reach that baseline $1.6 million with the understanding that the library would pay back $100,000 of that through possibly more fundraising money or by dipping into a large pool of donated money by Walter Wienke in 1996 that is especially ear-marked for library improvements.

“I feel fabulous about the council’s willingness to forward the $700,000 to help complete the project,” Clinefelter said. “I think they understand the importance of the library, how it positively affects so many in the community, and that this project updates the building for the next 25 years.”

The project has been in the works since 2018 and Clinefelter said she was happy that the project could go forward.

“We lost so much momentum with COVID, so I am just thrilled to see the project move forward,” she said. “I think the community is going to be really happy with the changes.”

The council also advanced out of the work session a design allotment of $12,000 for design specs regarding a consolidation of three different lift stations that are nearing end of life functions.

All three are located in northeast Austin, north of interstate 90 and would include the removal of three stations in three phases in order to consolidate them into one with work starting next year and reaching into 2024.

Total cost of the project is $4.3 million dollars with $2.4 million of that coming from street improvement funds and $1.9 million from sanitary sewer funds.

• During its regular meeting, the City Council approved renewal of the popular tax abatement program through Dec. 31, 2025. The program was first established in 2016 and renewed again in 2019.

• The council also approved a noise study with SRF Consulting Group for $11,350, slightly higher than the original estimate of $7,088, which didn’t include a baseline measurement. Testing is slated to begin mid-October and will test noise levels between Fourth Street NW to the Cedar River.