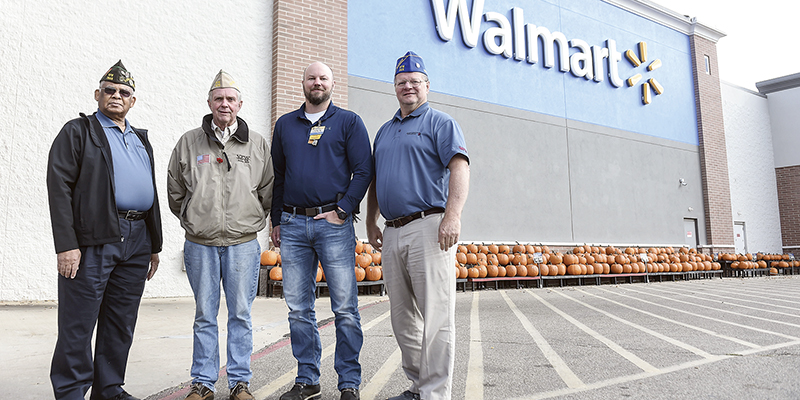 As part of an effort to bring awareness and treatment to veterans affected by PTSD and their families, Austin’s Walmart on Friday morning, donated $3,000 to the VFW-Warfighter Advance program.

With a goal of raising $400,000, Warfighter Council Co-chair Willie E. Stokes said the goal is to get veterans suffering from PTSD the help they need and get them into the community once again.

“The overall thing that we want for veterans, especially those suffering PTSD, is to come forward and go through the program,” Stokes said. He continued by saying that those who have gone through have found new life through the program. “They say it gives them a new lease on life. They are reintegrating themselves into their community and their family.”

Committee member Chris Sepich said that 25 stores were reached out to in southeast Minnesota and western Wisconsin. The stores that have donated out of those 25 have combined to raise more than $23,000 alone.

“It’s been very, very supportive,” Sepich said of the donations.

Austin Store Manager Cainon Hass said that this is just another way his store strives to be a part of the Austin community.

“Walmart is a big company and sometimes people don’t understand that individual stores give to the community,” he said. “We like to be involved and let people know we’re here to help.”

According to the group’s website, money raised will go toward helping veterans through a seven-day training program at Lions Camp Merrick in Patuxent River, Maryland.

The goal is to help those considering suicide stemming from PTSD the support they need. Stokes said of the 800 that have gone through the program, none have committed suicide.

There is also an upcoming benefit concert on Oct. 11, at the Weber Center in La Crosse, Wisconsin featuring national and internationally recognized Voices of Talent, a quartet made up of veterans, who also appeared on America’s Got Talent in 2019 where they finished fifth.

Anybody who wishes to attend should visit www.ptsdbenefit.org where they can get tickets for the event.