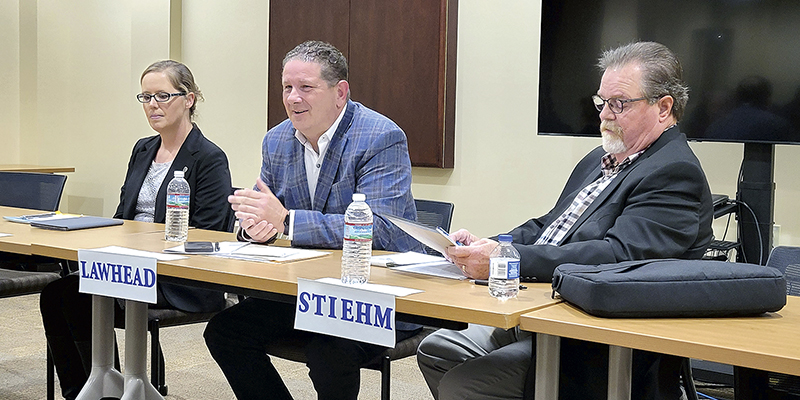 Candidates in both areas answered a variety of questions ranging from topics posed to state candidates on abortion/contraception to questions regarding the roll of city council for the city council races.

The forum featured a broad range format that saw candidates from Representative District 23B and Senate District 23 on the same stage answering the same questions.

Both candidates for 23B — incumbent Patricia Mueller (R) and challenger and former Austin Mayor Tom Siehm (D) — were on hand while District 23 featured only Democratic challenger Brandon Lawhead. Republican incumbent Gene Dornink was unable to attend.

All three gave a range of answers as to why they were running, with Lawhead speaking directly to the partisan nature of the current political climate and indicating that if something doesn’t change it could have profound effects far into the future.

“I’m not proud of what we have here and I don’t think any of you are either,” said Lawhead, who often referred to his campaign motto of Let’s meet in the middle. “This is not what we were given when we were young. Three hundred years from now we might be known as the generation that blew it.”

Meanwhile, Mueller told the story of how her own English class students pushed her into running for office and that they challenged her by using her own philosophy of being involved if you want change.

“My students compelled me to run,” she said in her opening statement. “You need to be part of that change.”

Her challenger echoed a little bit of Lawhead’s reasons for running. Stiehm hearkened back to America’s break for independence and indicated that he wanted the opportunity to work toward cooperation once again.

“I don’t think they fought for what we’re going through now,” said Stiehm, who also brought up the events of Jan. 6 during the insurrection at the Capitol. “I would like to be a conduit that would see both sides working together.”

While the first question allowed candidates to talk about their own reasons for running, the next question set up a much more tense discussion when it asked candidates their views on women’s rights regarding contraception and abortion.

Lawhead took the opportunity to go after Dornink, pointing out his record in the Legislature that threatened women’s rights, insinuating the senator wanted to avoid the subject.

But he also said that Republican efforts to take away abortion rights in the state could have blow-back effect for business.

In the race for 23B, Mueller took the opportunity to tell a very personal story on why she chose to defend the sanctity of life regarding her own inability to have children before urging voters that it’s up to them to do away with abortion. That, she said, also includes altering the Supreme Court.

“I believe all life needs to be protected — period,” Mueller said. “The way Minnesota is going to have any change right now is you, the voter. The only way it’s going to be overturned is if we get new Supreme Court justices appointed by the governor.”

Stiehm advocated for women’s rights and spoke to the personal nature of the decision itself.

“[That’s] between her and her doctor,” Stiehm said. “It’s a health issue.”

The three candidates also answered questions on their vision for education, which saw them each touch on proper funding for education and priorities for setting the budget for the next two years.

Both Lawhead and Stiehm again touched on education in terms of budgeting while Mueller said that she wants to see more money put toward schools and infrastructure as well as making sure any surplus gets back to the citizens and that more money is targeted locally.

The final question had to do with their stance on getting driver’s licenses for undocumented residents. Both Stiehm and Mueller advocated for an easier route to get the people licenses, arguing that it benefits the community.

Mueller pointed out that she voted for such a bill during this last budget cycle.

“I am one of three Republicans that voted for it,” Mueller said. “I realize just how important a driver’s license would be for people here trying to get a better life.”

Stiehm pointed out the local dynamic to the question.

“There are very few undocumented people in Austin anymore,” he said. “It’s not an issue for Austin like it used to be. They should be able to get a public ID and a driver’s license. We’re talking about the people in Minnesota.”

Lawhead was in favor of a pathway as well, but he also argued that the law is the law.

“Illegal immigration is illegal,” he said. “I think we have too many people again trying to steal their agenda rather than going through the democratic process. Can there be a pathway? There should be. If people have a driver’s license they can get insurance. In the end that would be something that would help.”

“I want to be clear in stating, people need to go through the lawful process to be legal citizens,” he clarified.

The City Council forum had nearly a full slate of candidates minus both Second Ward incumbent Jason Baskin and challenger Watsana Thiravong.

Candidate questions in this second half of the forum concentrated more on locally-centric issues including the opening question of what candidates believe is the role of a city council should be. First Ward incumbent Rebecca Waller and Third Ward’s Joyce Poshusta said that the central role is to represent the people, not only in their individual wards but outside as well.

“We’re here to represent the people of Austin and the people in our ward,” Poshusta said. “We need to take the city as a whole into our decisions.

At Large challenger Oballa Oballa and Third Ward challenger Ronald Kelly also spoke directly to the importance of service in the community both on a grand scale, and also to the people themselves.

“I think we need to treat people like individuals,” Kelly said. “Recognize every person has concerns and we need to make those concerns a priority on the council. We want to help make their lives better in any way we can.”

First Ward challenger Laura Helle advocated for a broader approach pointing out the status of the city itself as being one of the bigger employers.

“We are also charged with responsible use of tax dollars,” Helle added. “We need to really understand the budget and the city as a system.”

At Large incumbent Jeff Austin argued that the city council is important in creating policy.

“I see the city council as the policy board for the city,” he said. “We set those policies and charge our department heads and employees with following through on those. It’s also working together.”

There was also an overall consensus on ensuring Austin is a welcoming environment, not just for immigrants but families as well.

Waller also pointed out a need for transparency.

“I think the city’s responsibility for making this city home is being transparent,” Waller said. “Continue to grow, develop business and housing. We need to continue to grow.”

Likewise, there was across the board agreement when answering the question of how should the City of Austin welcome immigrants.

Austin said that the city should look to its own example to continue welcoming people.

“I think we’ve received statewide, even nationwide [attention],” Austin said of the city’s success in being welcoming. “We make sure everybody is welcome by making sure the jobs are here.”

The second of the two will be held this coming Tuesday, again in the Government Center starting at 6:30 p.m. featuring Mower County Commission candidates and Austin Public Schools Board candidates.