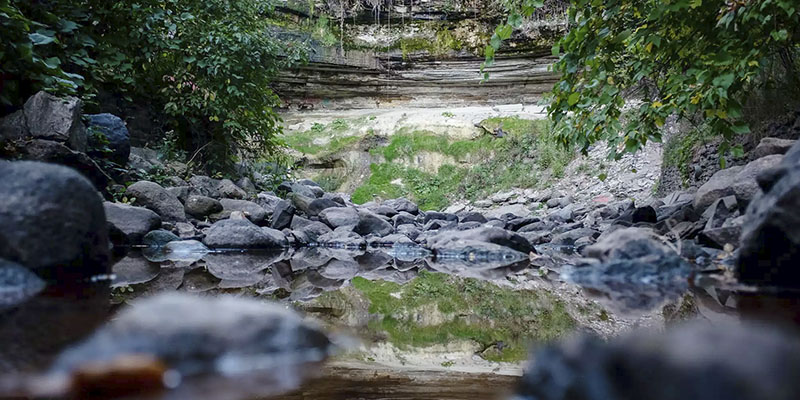 The bed of Minnehaha Creek is seen below a dry Minnehaha Falls in Minneapolis on Tuesday.Ben Hovland | MPR News

Just a few months ago, heavy spring rains filled lakes and rivers to the brim and left farm fields too wet to plant.

But summer brought less rain than normal across much of Minnesota. The result is a drought that’s not as severe as last year, but is slowly expanding across the state, including central and southern Minnesota.

The latest U.S. Drought Monitor report released Sept. 22 shows nearly 20 percent of the state is in either moderate or severe drought, while more than 40 percent is abnormally dry.

The region of severe drought stretches from the seven-county Twin Cities metro southwest to Pipestone County, Romolo said, with some areas anywhere from 4 to 8 inches below normal in precipitation.

So far, this September has been the driest on record in the Twin Cities, according to the National Weather Service. Less than a quarter inch of rain has fallen this month at Minneapolis-St. Paul International Airport.

One exception to the dry spell is northern Minnesota, which received more rain this summer, and so far is avoiding the drought.

While the water levels of some lakes and rivers have dropped, the dry conditions are not yet having widespread, serious impacts across the state.

Farmers are mostly past the growing season, so the dry conditions shouldn’t affect their crops, said Brad Carlson, a University of Minnesota Extension educator in Mankato.

“Really, farmers would prefer that it’s dry from here on out, so that they don’t have to worry about muddy conditions and messing up fields during the harvest season,” he said.

“When we don’t have excess water, they just sit in place in the fields,” he said. “So from that standpoint, it’s actually good for water quality.”

Farmers also won’t need to use as much energy in the form of natural gas and propane to dry their corn — a positive given the current high fuel prices right now, Carlson said.

Whether the drought continues into spring planting season depends on what kind of winter Minnesota has this year. Romolo said two factors are important: how much snow we get, and whether we retain that snow throughout the winter.

A heavy snowfall that sticks around all winter would be just what Minnesota needs to replenish dry soil before next year’s growing season, Romolo said.

“Maybe even just an average snowfall might be enough to help us out, if we get some rains in the spring to top it all off,” he said.

An early snowfall also could have an impact, Carlson said, by insulating the soil and preventing frost from getting too deep. Then, after the spring thaw, water from melting snow could seep into the soil, he said.

“However, if we get a hard freeze, and a deep freeze, then most of that snowfall is going to melt and run off, and so that probably won’t help a lot,” Carlson said.