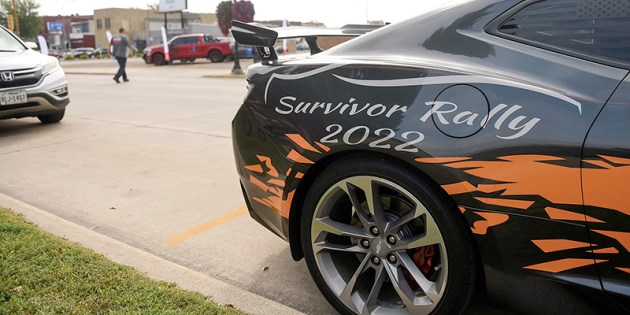 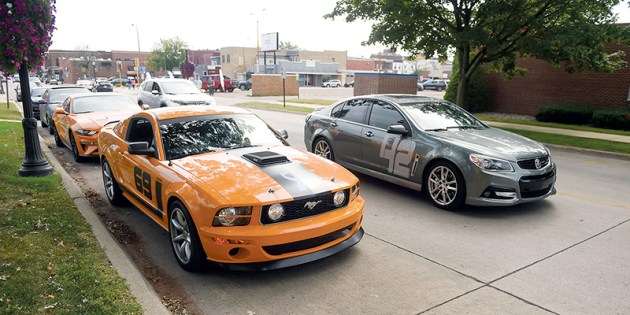 Drivers taking part in this year’s Survivor Rally pulls up in front of the Hormel HIstoric Home Friday. Eric Johnson/photodesk@austindailyherald.com 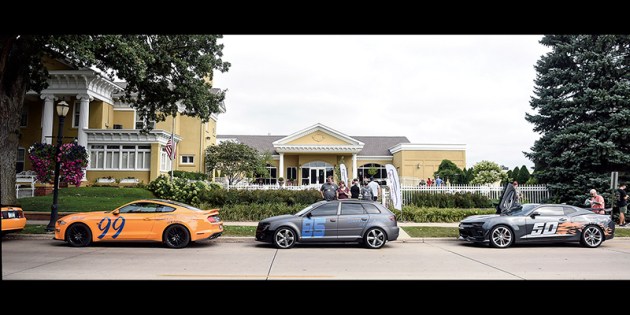 Drivers mingle with each other and passerbys in front of the Hormel Historic Home where this year’s Survivor Rally made a stop Friday. Eric Johnson/photodesk@austindailyherald.com 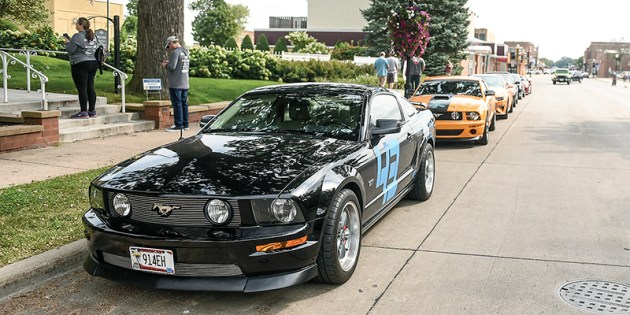 A line up of cars taking part in the Survivor Rally were parked in front of the Hormel HIstoric Home Friday. Eric Johnson/photodesk@austindailyherald.com

It was hard to miss late Friday morning that there was something going on at the Hormel Historic Home.

Starting at around 11 a.m. a range of sleek, fast-looking vehicles began showing up, painted in bright colors and all adorned with racing numbers.

However, this wasn’t a race. This was a drive to raise money to help those fight cancer.

The cars and their drivers were part of the Survivor Rally, a three-day rally that sees participants range across a scenic drive raising money for a variety of purposes.

In its third year, the drive roamed for those needing help with their cancer fight.

“We want to help people while they are going through their cancer battle,” said Ruth Melancon, who is going through her own cancer battle. “We found that when going to Mayo there are people, especially during COVID, who can’t afford to even get to the doctor or they can’t afford to pay for lodging to stay overnight. If we can help them, let us help them. If we can help them while we are having fun with our cars, why not.”

It’s clear the owners are having fun. Each vehicle was a testament to the love they have for their vehicles, but the rally itself is also a testament of the willingness to give.

As of Friday, this third rally had raised just over $17,000. However, according to Monday’s count on the Survivor Rally website, the group had raised just under $23,000.

Part of that money came from Hormel Historic Home itself, who donated a sum to the rally.

“At the Hormel Home, we’re all about helping people raise funds and supporting other organizations trying to make a difference,” said HHH Executive Director Cindy Meany, adding: “We want people to know that those things are very important to us and we acknowledge that they are equally important to the person organizing their event.”

In the two previous years, the rally has raised $7,500 for domestic and sexual abuse victims and $22,000 for suicide awareness. In total, the Survivor’s Rally has raised around $52,444.

Meany said that stops like the Survivor’s Rally on Friday are a perfect fit for what the HHH tries to do each year.

“We’re here to serve the community in whatever way we can,” Meany said. “Our focus has been on really helping other organizations that are non-profits that really hone in on wanting to make a difference either in somebody else’s life or a demographic’s life.”

It’s important to note that the rally isn’t a race, but it is a competition. According to Melancon, throughout the three days drivers are given checkpoint and bonus points cards, which provide clues as to where to go next.

On average there are 13 to 14 checkpoints, plus bonus points. But there are also other stops including a stop at a NASCAR race in Kansas City this year.

Melancon said that of the registration paid for by drivers, $100 of it goes to the rally drive, which also includes a peer-to-peer facet where drivers raise money through friends or people they know.

However, if people have missed the event, there is still time to give.

“If people are interested in donating, our website is https://survivorrally.com/,” Melancon said. “We take donations right there on the website. Donations are taken all year long.”

Events like the Survivor Rally also serve as a reminder that the HHH is there to help everybody who may wish to make a difference.

“We’re always open to helping other groups support whatever they stand for and we would love to be their venue,” Meany said.