Sister support system: Shutes have learned about work ethic and competition together 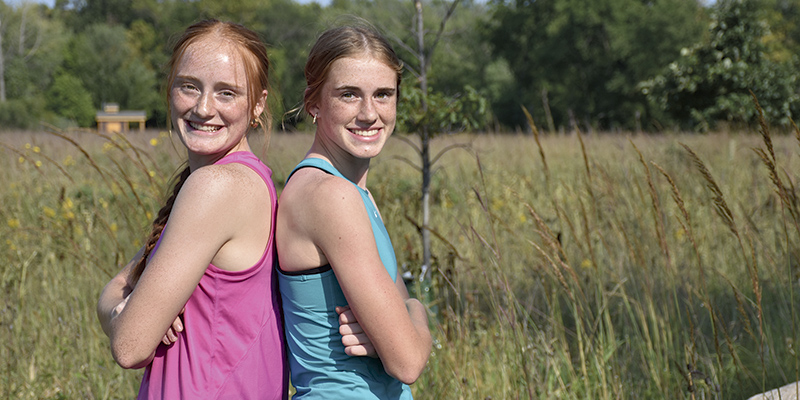 Austin's Cassidy Shute and Marissa Shute have been crucial to each in sports and on the farm. Rocky Hulne/sports@austindailyherald.com

It was a hot early September day and the Austin cross country team was running five miles worth of hills when Austin senior Cassidy Shute was starting to lose her motivation. That’s when she saw the smile of her younger sister and teammate Marissa, which gave Cassidy all of the fuel she needed to finish the workout.

“Her presence on the team makes it one 100% better,” Cassidy said of Marissa. “She is somebody that I always look up to even though she’s my younger sister. She really says encouraging things during our workouts or she’ll just smile at me. That just makes me happy and I’ll know I can finish that last workout.”

For as long as she can remember, Cassidy has always had two shadows, and she wouldn’t have it any other way.

Just two years apart in age, the sisters began running 5Ks together at an early age and Marissa would come to cross country practice with Cassidy when she was only a fifth grader.

“They kind of always thought I was on the team, but I was just tagging along. I’m always tagging along,” said Marissa, who is now a sophomore. “It’s so fun to be on the team together, but it’s sad that Cassidy’s time is coming to an end. We’re going to make as much of it as we can.”

While they’ve spent a lot of time running together, Cassidy and Marissa’s time goes well beyond cross country. They compete in basketball together, they both run track and field, and they spend a lot of mornings up at 5:30 a.m. doing chores or working with their 4-H cows at the family farm, which they share with their grandparents.

“We did a lot of things this summer and there wasn’t really a moment that we weren’t together,” Cassidy said. “That bond has definitely improved over the years because when we were younger we used to hate each other and now we can’t get enough of each other. As a senior, I am now embracing the little moments that we have together.”

Last year was a big year for the Shute sisters as Marissa ran in the Minnesota State Cross Country Meet for the first time and Cassidy was a starter on the girls basketball team that went to state, while Marissa was a reserve. There was no jealousy from either Shute as Cassidy was running alongside Marissa and cheering her on at the state cross country meet and Marissa was screaming from the bench in support of Cassidy at the state basketball tournament.

“I just want her to live up her moments,” Cassidy said of Marissa. “I knew she could get to state last year and it was so cool she was able to support me at state basketball.”

While staying active in 4-H and three sports each, Cassidy and Marissa are both able to maintain their studies and a 4.0 GPA. Both girls motivate each other, especially on those early mornings on the farm.

“I get to see Cassidy 24-7, so it’s very fun when I get to cheer her on in the things that she loves,” Marissa said. “Most kids like to sleep in, but we’re up every morning doing our cows before cross country. That helps us a lot. We show up every day (in sports) and we’re not just there for ourselves. We’re there for the team and we want to help everyone on our team.”

Cassidy admits there are days when she is tired, but she hasn’t let it slow her down. She and her second shadow have learned an invaluable work ethic at an early age and they’ve also learned to manage their time.

“It’s a grind,” Cassidy said. “You have to know what you’re going to do. Are you going to go out and support other athletes, or are you going to get your studies done? It’s a balance and you kind of get used to it.”