Remembering the lost of 9/11 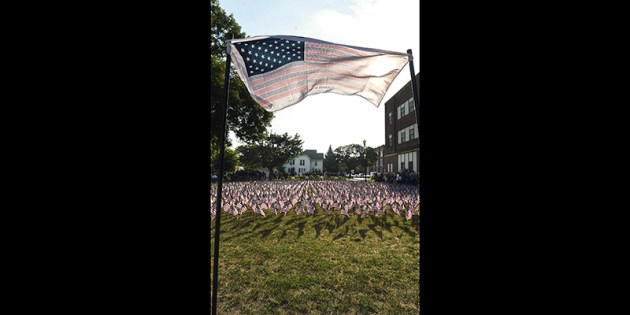 A flag with the names of all of those who lost their lives in 9/11 fly about thousands of other flags representing the 2,977 people who died that day. The flags were placed on the green of Pacelli Catholic Schools. Eric Johnson/photodesk@austindailyherald.com 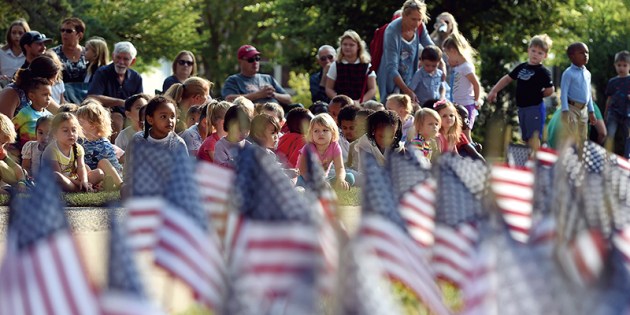 Pacelli Catholic School elementary students sit outside among the thousands of flags Friday morning during a rememberance for 9/11. Eric Johnson/photodesk@austindailyherald.com 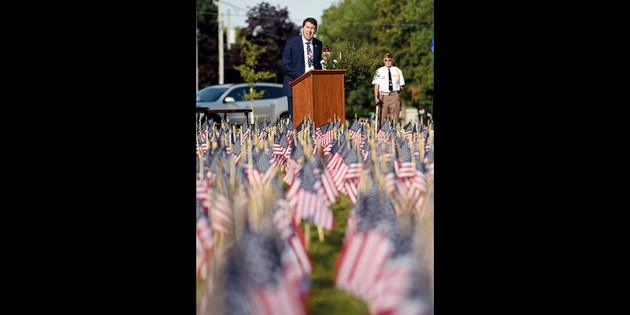 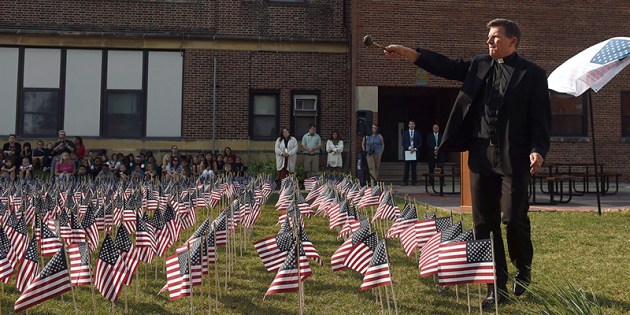 Father James Steffes blesses the field of flags on the green of Pacelli Catholic Schools Friday morning during a program honoring those who died on 9/11. Eric Johnson/photodesk@austindailyherald.com 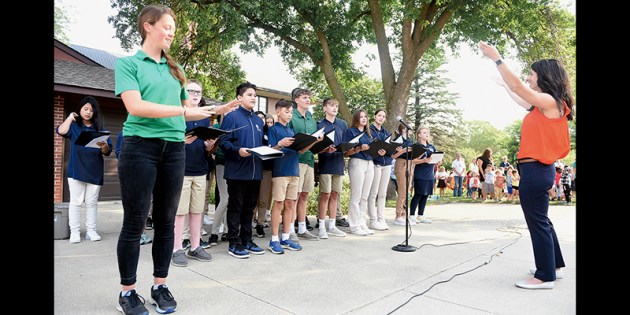 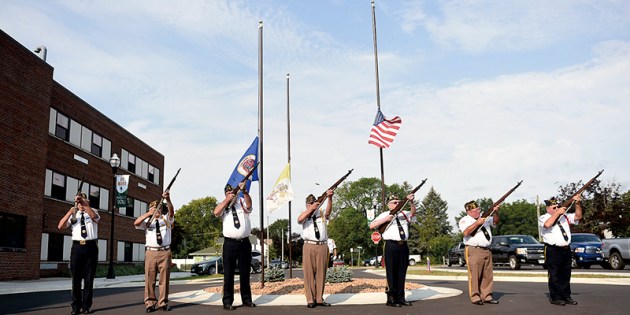 Members of the VFW and Legion Color Guard fies off a 21-gun salute during Friday’s program at Pacelli Catholic Schools honoring the lives of those who died on 9/11. Eric Johnson/photodesk@austindailyherald.com 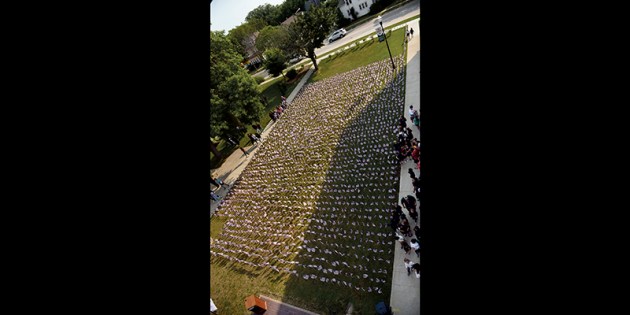 The whole of the 2,977 flags were visible from the roof of Pacelli Catholic Schools Friday morning. Eric Johnson/photodesk@austindailyherald.com

There is a disconnect of time between students of today and those who lived through the events of 9/11.

There isn’t a student today who was alive on that day when 2,977 people lost their lives at four different sites: The World Trade Center towers, the Pentagon and Shanksville, Pennsylvania. It makes it hard for students, who may see those events in 2001 as just another dark footnote of history.

It’s also why events like Friday’s ceremony on the green of Pacelli Catholic Schools is so important.

“It’s so strange that everybody here knows this, but the kids here have no clue,” said Pacelli Social Studies teacher Nicholas McGrath. “It’s so fundamental to the way they grew up.”

“Kids live and breathe the 9/11 experience without knowing what it is,” McGrath added, referring to the world that rose from the ashes of Sept. 11, 2001.

In this new world, a new brand of skepticism came into being, a questioning of the greater world in which we are a part of.

In a society that recognizes important dates in the terms of five, 10, 25 and 50 years at a time, the United States recognized the 20th anniversary of 9/11 last year with reverence and solemn fortitude. But events like Friday’s service also serve as a reminder that this is an event recognized every year, even if not on the scale of last year’s remembrance.

“This is an annual event,” McGrath said. “It’s an annual check-in on what we are, where do we come from. The 9/11 experience shaped what we are and what we do.”

The magnitude of 9/11 was reflected in the field of American flags laid out on the green. Having taken staff and students two days to put up the nearly 3,000 flags, it was a physical reminder of what 9/11 was and still is for a generation that has no vivid or candid memory of the day.

In a lot of ways it puts the events of 9/11 into a greater context for students.

“This is a lot of flags,” McGrath told students. “Yet it is an absolutely worthwhile task.”

Throughout the service, during prayers and moments of silence, the sea of red, white and blue rustling in the wind provided the only poignant soundtrack to the memorial.

At its head flew another flag, this one made of the names of all those who lost their lives that day. It was also a moment that Father James Steffes recognized during his blessing and prayer of the event.

A need to remember the eternal life God granted.

“We gather this day to pray for those who lost this perish gift,” Steffes said.

In the world of questions that came after the attacks, innocence was lost, but McGrath said that it continues to remind what we are as a nation. It’s something he hopes students took with them when they left Friday’s service.

“America is good. Being American is good,” McGrath said. “America is founded on the idea that every citizen matters.”

Still, McGrath recognized that as a teacher who remembers 9/11 and watching it unfold, that teaching about this particular point of history and those things that came after is a challenge.

The challenge is finding  that connection.

“For the American student, this is another lesson in Mr. McGrath’s class,” he said, going on to say that it was our neighbors that got us through this day and that the idea of ‘Love thy neighbor,’ “is quickly embraced.”

It was the parting words of Steffes as well that in the middle of the darker times comes a need for people to carry the good forward with them and to continue to live in the grace of God.

“We can bring that to our world,” he said.

The flags will be up throughout the weekend for people to come see and walk around among. Going into next week, the school will also hold a fundraiser for Tunnel of Towers, an organization that raises money to help people who lost family members in the 9/11 attacks pay for things such as mortgages.