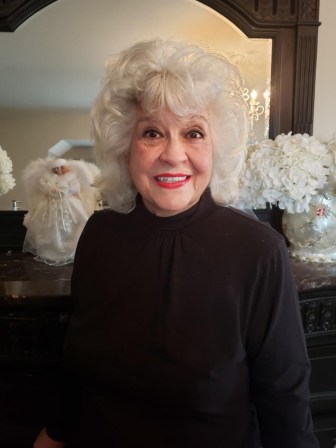 Pauline Grace Forbes Stanley passed away suddenly and peacefully on June 13, 2022 after a very brief illness and 86 full rich, years of life. Pauline (“Nini” to her grandchildren and many others!) was born on October 24, 1935, to the late Michael Coley and Beda Phillips, in Ticonderoga, NY. After the death of her father, Pauline was later adopted and raised by her stepfather Martin Forbes. She was preceded in death by her youngest son, Derek, who passed away just two months prior to Pauline, and her brother Tony Forbes.

Pauline always held a soft spot for her hometown of Ticonderoga, where she graduated from High School, and was a head cheerleader and chosen as Prom Queen. She was married in Ticonderoga to the late William John Stanley, where they built a very successful restaurant and motel business. Pauline was instrumental in it’s success and was also involved in many community activities and organizations (she was the most popular Girl Scout Leader!), all while raising five children. She later moved to Rochester, MN as a strong and resilient single mother, where she started a career in real estate and a very successful sales career, where she earned numerous awards. She also later earned a degree in Hospitality Management. She was a shining role model to her children, who adored her. They all thank her for instilling in them, their sense of confidence, independence, and work ethic. Pauline would call many more places home over her lifetime including Orem, UT, Austin, MN, Charlotte, NC, and most recently Wentzville, MO. Thirteen of the last 14 years of her life were spent in Charlotte, NC. She loved living in Charlotte and became very active with the Levine Senior Center there. She relived her teenage years by becoming a member of the “Golden Girls” cheerleading squad, whose members were all in their 60’s, 70’s and 80’s! They were even invited and performed at halftime during an NBA game of the Charlotte Hornets. They also appeared on a local television show and numerous parades in the Charlotte area.

Pauline was one of those special people that just seemed to sparkle! Fun, outgoing and beautiful, she attracted attention wherever she went. She also had such a kind and giving spirit and was so empathetic to people who were going through struggles. She would step up and become an advocate for and assist others that needed help or had a hard time speaking for themselves. Her family would find out later of many acts of giving and kindness, performed anonymously during her life. She was simply the best!

Pauline’s children were her world, and pride and joy, and she was totally devoted to them. She especially loved cooking for them and her grandchildren at family gatherings and holidays. Her children loved hearing her tell stories from her past which usually ended up with gales of laughter!

She leaves behind a powerful legacy of love and dedication to family. Among those that will miss her most and that she loved most are her children Roxanne Barnes (Mark Windt), Renee Anderson (Jeff), Roslyn Stanley, Bill Stanley (Gail), 12 grandchildren, 18 great grandchildren, her sister Dorothy Spackman, several nieces and nephews, and her special friend Don Smith, with whom she recently reconnected with after almost 70 years and quickly grew to love. We will miss her beyond measure.

A celebration of Pauline’s life will be held on Monday, September 12, 2022, at 11:00 am at the Church of Jesus Christ of Latter Day Saints in Austin, MN. Family will receive friends beginning at 10:00 at the church. Interment will be at Oakwood Cemetery in Austin, MN. In lieu of flowers, please consider a donation in Pauline’s name to her beloved Levine Senior Center, 1050 Devore Lane, Matthews, NC 28105, or the Susan G. Komen Breast Cancer Foundation as her daughter Renee is a now healthy breast cancer survivor.