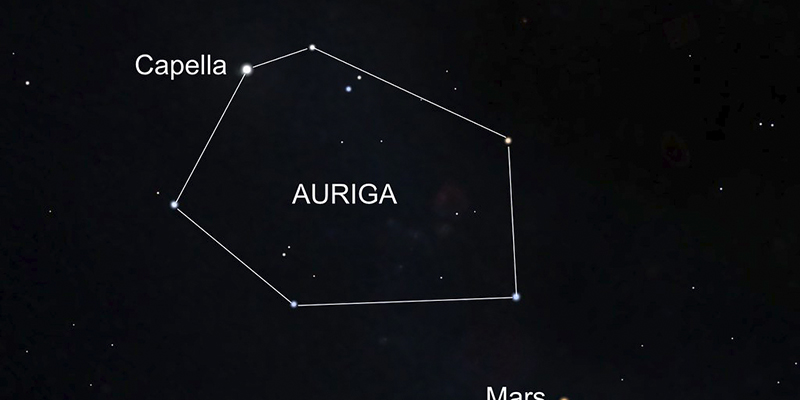 The nights are getting longer and darker, but brilliant Jupiter provides a beacon until well into the morning hours.

The king of planets comes out in the east at nightfall and dominates the sky. West of Jupiter shines Saturn, and above the ringed planet the Summer Triangle of stars still rides high. A waxing moon passes Saturn between the 4th and 5th and Jupiter between the 7th and 8th. 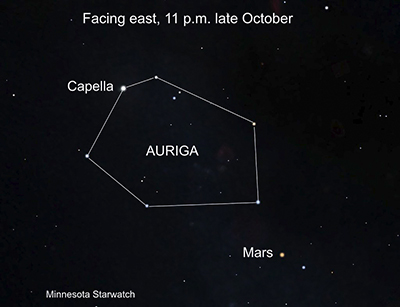 The two giant planets are now drifting through the dim autumn “water” constellations Capricornus, the sea goat; Aquarius, the water bearer; and Pisces, the fishes. Above Jupiter, the Great Square of Pegasus, the winged horse, is easy to find. Looking below the Great Square and to the upper right of Jupiter, see if you can make out the faint ring of stars known as the Circlet of Pisces. If skies are dark, you can find all these stars and constellations, but you’ll probably need a star chart.

Farther east, Mars is now rising before midnight. The red planet appears below the roughly hexagonal form of Auriga, the charioteer, and its crown jewel, Capella. With Earth rapidly gaining on it in the orbital race, Mars waxes brighter every night.

October’s full moon rises the evening of the 9th. It will be about as round as it gets and lovely against a pale sky.

October ends with an astronomically based holiday. Halloween began as the Celtic holiday Samhain (“SAH-win”), which marked the beginning of the dark half of the year and was one of four cross-quarter days falling midway between an equinox and a solstice. On that night, evil spirits that had been cooped up since May Day were set loose upon the world. To ward off the spirits, people left bribes of food and lit candles in hollowed-out gourds. Those practices led to our traditions of trick-or-treating and carving jack-o’-lanterns.