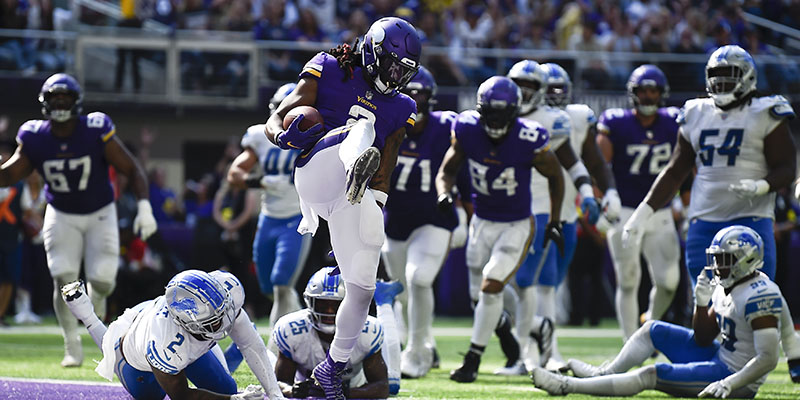 Minnesota Vikings running back Alexander Mattison, center, celebrates after scoring on a 6-yard touchdown run during the second half of an NFL football game against the Detroit Lions, Sunday, Sept. 25, 2022, in Minneapolis. (AP Photo/Craig Lassig)

EAGAN — Through four NFL seasons, running back Alexander Mattison has started six games, serving as the understudy to Dalvin Cook’s starring role with the Minnesota Vikings.

Mattison, a third-round pick in 2019 out of Boise State, has demonstrated his importance when he’s received his opportunities. In four of his starts, he’s run for at least 90 yards. He’s added five touchdowns when Cook is out of the lineup.

Having Mattison available has been a luxury for Minnesota.

“He’s that next guy-up mentality, and if you want a guy that you want to look for to be the next guy up, I think that’s the guy in every way, shape and form,” Cook said this week.

“Mentality-wise, he’s always prepared. He studies well; pro all the way around. I’m just proud of his growth every year. I see him come in. He looks bigger every year I see him. I’m just looking forward to us putting up some numbers this year and going to win a big one.”

Mattison might be called on yet again this week with Cook leaving last Sunday’s game with a shoulder injury. Cook missed practice Wednesday and is considered day to day leading up to Sunday’s game against the New Orleans Saints in London.

The Vikings don’t believe there’s much of a drop-off when Mattison is lined up in the backfield. Coaches are able to keep similar play calls, which has even led to offensive linemen being unsure of which back is in the game.

“The O-line will turn around and they’ll ask, ‘Wait, were you in or was Dalvin in?’,” Mattison said. “So, that’s really good for us to be able to not miss a beat and continue just operate as a whole the way that we continued to prepare to do.”

Mattison is in the final year of his rookie contract and is as valuable to Minnesota as any backup running back in the league. When Cook was hurt late in the third quarter on Sunday, Mattison again responded.

Mattison had three carries for 12 yards, including a tough-earned, 6-yard touchdown. He added a 16-yard reception.

“I’ve talked to you guys a lot about truly feeling pretty fortunate to have a running back room set up the way we do; with multiple skill sets, with the depth of guys that can go in,” Minnesota coach Kevin O’Connell said.

“I mean, Alex’s touchdown run there in the second half is just an example of his ability to just not be denied. I think he broke about three, four tackles on the play and finished on his feet in the end zone.”

Cook missed one game last season and one in 2019 with shoulder injuries, part of a string of injuries for the Vikings’ workhorse back. In all, Cook has missed 24 games because of injuries since his debut in 2018.

“I wouldn’t want to go to war with nobody other than that guy being right behind me,” Cook said. “Our relationship is real close. And on the field, you see the production he give us every time that I’m down, every time that I come off the field and he goes in.”

Cook is a three-time Pro Bowl selection who has rushed for at least 1,135 yards in each of the past three seasons, meaning Mattison has been left to spot duty or injury fill-in.

He’s ready when he gets his chance.

“For me, I kind of have to already be in that mode when it’s my time to get in the game,” Mattison said of coming in cold. “So, just feeding off of Dalvin’s energy, feeding off the O-line as an offense and just kind of preparing myself that way even before the time is there, just mentally, it kind of helps me out.”