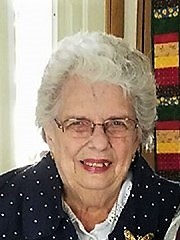 On Sept. 4th, 2022, Heaven’s gates opened and welcomed into eternal life, Mary Ann (Finnegan) Flicek. Mary was born Dec. 1st, 1934, in Litchfield, MN to Thomas and Bertha Finnegan. Her father Thomas, entered into his eternal life shortly before her birth. She spent her childhood growing up in Litchfield alongside her two older brothers, Cyril and Jerome, who she lovingly adored throughout their lifetimes. Her mother was later united in marriage to Arnold Fernandez and then relocated to Austin, MN. where they welcomed her very dear sister, Cindy into the family.

Growing up in rural Austin, Mary attended the Austin area rural and public schools for many years and later she moved to Beloit, WI where she finished her education graduating from Beloit Memorial High School. After graduation she worked as a switchboard operator for the local telephone company.

Mary married the love of her life, Melvin Flicek, on Nov. 28, 1953, in Austin, MN. Together they raised four sons, John, Terry, Mark, and Tim. They were also blessed with eleven grandchildren and twenty-seven great-grandchildren. She was happiest when surrounded by her family and always strived for the best for them. She was formerly employed at several area businesses including Comfort Care, Tempo, Oak Park Fashions, 16 Plus and The Village Pump Restaurant. She loved to bake and cook. She knew many of the old family recipes by heart with just a dash of this and a splash of that. She loved spending time playing cards and games with family and friends. She was always up for a good chat on the phone, often chatting away late into the night with many of her longtime friends.

A memorial mass for Mary will be held 11 am Friday, Sept 30th, 2022 at Saint Augustine Catholic Church, Austin, MN. Visitation with family and friends will be held at 10 am prior to the service and afterwards in Jennings Hall, in the church basement. Special thanks to Father Steffes, Saint Augustine Parish, Legacy of Brownsdale Assisted Living nurses and staff and St Croix Hospice for their extra special attention and care.

Memorials to the family and Saint Augustine Church. Interment will be at a later date.