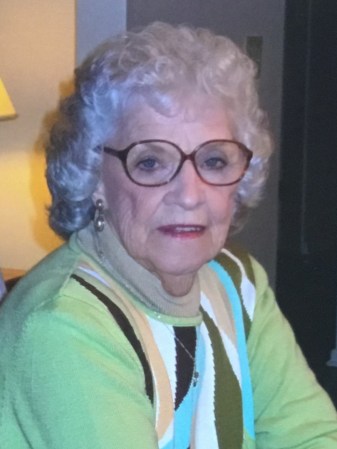 Marjorie Elizabeth (Marge) Boelman passed away peacefully on September 11, 2022, at Good Samaritan Society in Albert Lea, MN. Her four daughters were grateful to visit her often in this skilled nursing facility after her fall in April. A memorial service will take place at Bonnerup Funeral Home on Saturday, September 17, 2022, at 11:00 a.m. with visitation one hour before the service. Lunch will follow the service. Marge will be inurned with her parents at St. Theodore’s Cemetery in Albert Lea.

Marge was born in Lincoln, Nebraska, on September 28, 1929, the year of the Depression. She was the tenth of eleven children born to Grover and Mary (Fink) Jackson. The large family moved to Albert Lea where her father worked at Wilson and Co., and Marge attended school at St. Theodore Catholic School and Albert Lea High School.

As a girl Marge loved to read and ice skate, and she spent a lot of time at the Carnegie Library and on the frozen lake. Her best friend was her younger brother Dode Jackson. The two of them often rode her pony “Kate,” which Marge won by sending in the most cereal box tops. It was an unexpected benefit of having ten siblings.

After high school Marge lived briefly in Rochester until she married Clarence Boelman in 1949. They settled in the Albert Lea area until 1955 when they moved to Rochester. Marge kept busy raising four daughters: Cynthia, Janis, Mitzi, and Jessica. She worked outside the home as a housekeeper and waitress, as well as helping manage Clarence’s roofing business. The couple later divorced and Marge moved to Winona and Adrian, MN, to work as a caretaker for people with disabilities.

In 1981, Marge moved to Austin, MN, and started work as housekeeper at St. Edwards Catholic Church. She also decorated the church and planned many parish activities. She was a talented and creative cook and decorator. She retired from this work in 1994, and lived in Austin until she moved to Albert Lea in 2016. She enjoyed living independently, spending time reading, going to the casino, visiting with friends, enjoying the lake birds and fountains, and dining at restaurants.

Marge is preceded in death by her parents, her ten siblings and their spouses, and her granddaughter Lucinda Lagomasino. She is survived by her four daughters: Cynthia Fjermestad of Albert Lea, Janis Lagomasino of Rochester, Mitzi Boelman (Steve Persons) of Plymouth, and Jessi and Dave Boeck of La Crosse, WI. She is also survived by her grandchildren and their families: Chris and Heidi Fjermestad (Alix, Chad, Brayden, Adilyn, Evan, Rowan, and Soren), Jenny Fjermestad and Travis Thompson (Madeline and Mia), and Brent Fjermestad; Luke and Leah Lagomasino (Elijah and Alana); Leah Boelman, Landon and Lisa Hall (Ozzy); Cortny and Mike Racine (Amelia and Briar), Morgan Pember (Owen), and Charlie and Chelsey Pember (Jack, Ryan, and Jonah), and many nieces, nephews, and friends.

Her family will miss her feisty personality, and we are thankful for her nearly 93 years of life. We would like to thank all of the healthcare professionals and the caregivers at Good Samaritan Society who kindly cared for Marge in her last months. Blessed be her memory.