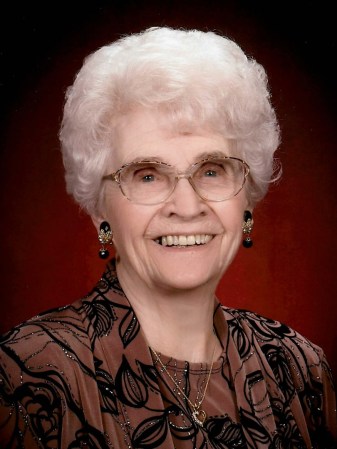 Madelyn was born to Albert and Florence Gilbertson on September 19, 1919, in Ostrander, Minnesota. She married Lawrence (Larry) Wiedemann on February 14, 1939. She was the mother of five children, loved to sing and dance, and was a wonderful cook. Madelyn was a faithful member of Grace Lutheran Church, taught Sunday school and sang in the choir until she was 93 years old.

Music was always a big part of her life. She won a music contest and her own radio show singing and playing the guitar when she was just 16 years old. She met her husband Larry at a dance, and whenever Begin the Beguine (their favorite song) played, they danced no matter where they were. They also owned a square dance barn in Austin, and she called for dancers who came from miles around.

Madelyn loved needlework and won prizes at the Mower County Fair for her beautiful crochet and hardanger. At the age of 76, she learned to quilt and belonged to the Quilters at Grace Lutheran Church for many years sharing her love of quilting. Over the years, she made many quilts, including those she made for her children, grandchildren, and godchildren.

Traveling is something she and her husband enjoyed. They traveled in a van to every state in the nation except Hawaii. They also traveled throughout Canada and Mexico. She made trips to Norway, Germany and at the young age of 87 she was able to visit Hawaii with daughter, Sharon and son-in-law Gary Herman.

She was a member of the Sons of Norway and enjoyed singing in their choir and sharing her Norwegian heritage with others.

A Celebration of Life will be held at Grace Lutheran Church in Austin, Minnesota on September 24, 2022, beginning with visitation at 10:00 a.m. and service to follow at 11:00 a.m., with Pastor Patrick Ziems officiating.