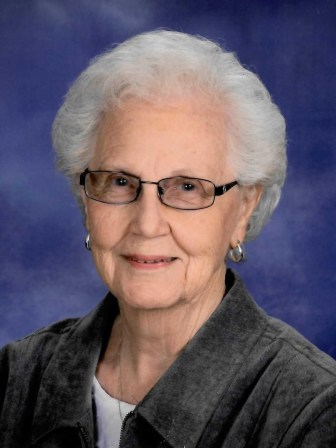 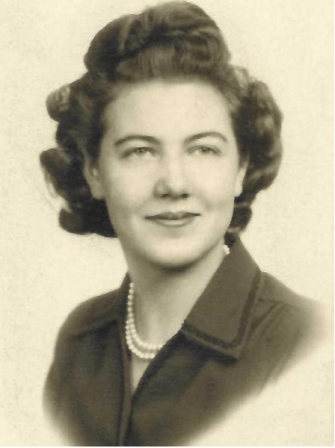 Lola Frances was born in Steele County, Minnesota to Albert and Ida (Myers) Hunter on February 25, 1928, the sixth of nine children. Despite the Depression and the chores of living on a farm, she spoke fondly of her early years swimming in the river, riding the horse and playing with her siblings and cousins who lived nearby. And books. Lots of books. But if you were reading one, no one else was allowed to pick it up. Sometimes her mother would play the piano and the family would sing. But Lola’s singing voice was such that she was encouraged to “just whistle.” She graduated from Blooming Prairie High School in 1945. She met Derrel Wood, a handsome World War II Marine, “around Blooming” and they were married on October 26, 1946. They lived all of their married life in Austin, where Derrel worked at Hormel’s and Lola was a homemaker, and together they raised their three children, JoAnn, Larry and Julie. Lola lived a life full of many friends of all ages and she was always ready to make a new one. She was lively and fun and when she hugged you, you knew you’d been hugged. Fussy babies didn’t stand a chance when she started rocking them. Her grandchildren adored her. They knew she was willing to pitch them a ball, or take them to the nature center, or play a game of Memory. There were always cookies in the yellow Tupperware container, but you had to be careful. The raisin ones looked a lot like the chocolate chip. She was famous for her potato salad, chicken and noodles and apple pie. Her children work at trying to make those foods as good as Mom did. She crocheted and gifted countless afghans and doilies over the years. And, wow, did she like birds. She found great joy in watching and reading about them, and collecting figurines and pictures. If you were lucky enough to be one of her nieces or nephews, she might have danced on the table at your wedding reception. And if you stopped in to visit her on a Friday night (or maybe Saturday, too) she would love to sip a Crown Royal with you. She and Derrel enjoyed a long retirement of golfing and spending winters in Texas and spending time with friends and family until he passed away in 2006. She forged on, adapting to living on her own, and continuing a life of love and friendship. She was a lifetime Methodist, and was a member of Fellowship and First United Methodist Churches in Austin.

Lola passed away on September 24, 2022 at The Cedars of Austin with family by her side. She was preceded in death by her husband Derrel, her parents Bert and Ida Hunter, her five brothers: Robert (Thelma and Marceil), John (Opal), Howard (Phyllis), Paul, and Roger (at age 16) and three sisters: Georgia Bishop (Howard), Mildred Pfieffer (Bill), and Marilyn Thoreson (Vince). She is survived by her three children: JoAnn Reshetar (Jerry) of St. Ansgar, IA; Larry Wood (Kim) of Marshall, WI; and Julie Wood (Mike Parry) of Waseca, MN; and her sister-in- law, Donna Hunter of Arizona. She also is lovingly remembered by her eight grandchildren: Michael Reshetar (Mindy), Sarah Moschenross (Ian), Karen Kann, Josh Wood (Theresa), Adam Wood (Angela), Ryan Wood (Lindsay), Jenna Weis, and Cole Weis (Nikki). She was thrilled to have 12 great grandchildren: Luke, Matthew and Jackson Reshetar, Eleanor, Evelyn and Henry Moschenross, and Gavin, Nolan, Owen, Sawyer, Sophie and Isla Wood. There are several recently added step grand/great grandchildren who never got the chance to know her. She is also survived by many nieces, nephews, cousins and friends. Dear to her heart were her niece and her husband Leone and Don Peterson, and her cousin and his wife Doug and Judy Myers. Now it is time to rest, beloved child of God. The babies have been rocked and soothed, the dishes are done, the books have been returned to the library, and the dancing can start in Heaven. We hope you know how loved you were and we will hold you in our hearts always.

Funeral services will be held at 10:30 am on Wednesday, September 28, 2022 at First United Methodist Church. Interment will follow at Grandview Cemetery. Visitation will be held Wednesday morning from 9:30 am – 10:30 am prior to the service, at church. Clasen-Jordan Mortuary is handling arrangements.

In lieu of flowers, memorials may be made to First United Methodist Church, the Hormel Nature Center, Mayo Clinic Hospice or Austin Public Library. The family extends their gratitude to the staffs of The Cedars of Austin and Mayo Clinic Hospice for their loving care.