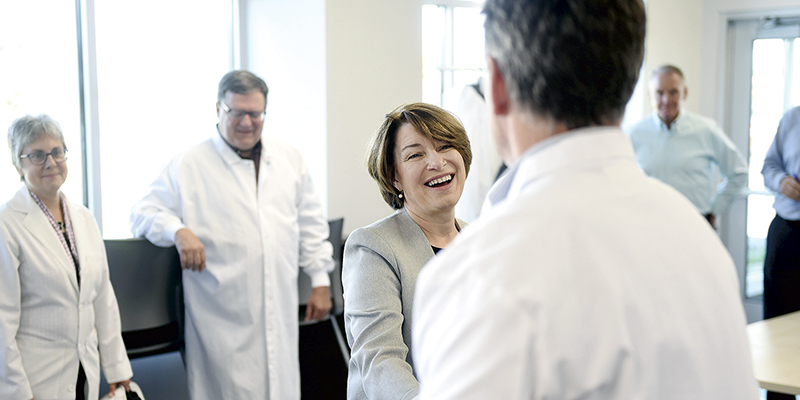 As Amy Klobuchar makes her way around the Minnesota State Fair, it’s quickly clear the senator is well known and, well-liked by many.

“I just want to thank you for everything you do,” says one fairgoer.

Some people who approached Klobuchar last week urged her to shoot again for the White House.

“I just told her she should run for president,” said Eugene Sublett. “I think she would make a great candidate, a good president.”

It’s something Klobuchar hears a lot amid growing calls for Joe Biden not to seek a second term.

Sublett said he thinks Klobuchar would likely be a better second-time presidential candidate following her initial effort in the 2020 race.

“She’s got the experience particularly as senator and the committees that she’s on,” Sublett said. “I think she’s done a good job.”

Asked about her political aspirations, Klobuchar offers a stock answer and quickly deflects to a group of friendly State Fair day drinkers.

“I’m here right here at the Minnesota State Fair because I love Minnesota and I love the people that drink beer before noon,” Klobuchar says with mock solemnity.

On issues, Klobuchar said she’s surprised how many people are bringing up the Supreme Court decision striking down federal abortion protections.

The right to legalized abortion, she says, is playing large among voters.

“They just think it went too far,” she said.

And looking ahead to November, Klobuchar said she believes Democrats are in much better shape than many had thought not long ago.

In addition to the abortion issues, Klobuchar said she is convinced most Americans are tired of former President Donald Trump’s brand of politics and dysfunctional government. She said she also thinks voters will reward Democrats for pushing through major legislation, including the infrastructure and inflation reduction bills.

“They have Donald Trump out there still trying to disrupt our democracy, spreading lies,” Klobuchar said. “They rejected him once, and he keeps at it. And he doesn’t stop, and there are a whole lot of moderate Republicans and independents in Minnesota and across the country that don’t want to have that chaos again. And that’s putting it mildly.”

Klobuchar said she thinks her party is on track to hold the Senate and maybe even buck the trend that typically leaves the party that holds the White House on the losing side of congressional midterm elections.

Despite bitter political divides in the country, Klobuchar said it’s rare for anyone to heckle her at the State Fair.

But one man did plow in front of the line of well-wishers at Klobuchar’s fair booth, shouting Russian propaganda about the invasion of Ukraine.

“Why doesn’t she stop sending money to Nazis in Ukraine?” he shouted.

Just a few days after that scene Klobuchar was in Ukraine meeting with the country’s president and arguing that U.S. funding for the war effort is crucial.

The trip certainly added to the impression that Klobuchar may have ambitions beyond Minnesota.

University of New Hampshire political scientist Dante Scala said the 2024 presidential race will begin the day after the midterms in early primary states like his — at least for Republicans — provided Trump does not launch a campaign before then.

For Democrats, he said all eyes are on Biden and whether he decides to seek a second term.

If the president’s decision is not to run, Democratic candidates will quickly emerge, Scala said.

In 2020, Klobuchar surprised many with a third place finish in New Hampshire. But Klobuchar dropped out early in the nomination process, struggling to attract support in southern states with large populations of people of color.

Scala said that remains a major obstacle for her national ambitions.

“If she were to make another run at the presidency, there’s still that question of how would she appeal to the multiethnic, multiracial electorate of the Democratic Party,” Scala said.