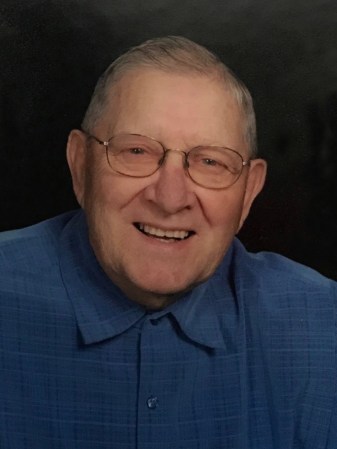 Joseph Philip Schneider was born to Joseph John and Theresa (Koenigs) Schneider on October 6, 1931, at their farm near Adams, Minnesota. He was the second youngest of eight children. He attended St. John’s Catholic Elementary School and graduated from the Adams High School. He enjoyed playing baseball and was known for his fast unhittable curveball. He was always proud that his team beat Austin. He later played with the Johnsburg Johnnies. He had long-term relationships with his many teammates. Baseball was always in his heart as he cheered for the Chicago Cubs and was so excited when they won the World Series.

Joe and Audrey Sterling met at the Terp Ballroom, fell in love, and they were married on June 30, 1953, at St. Augustine Catholic Church in Austin, Minnesota. They lived on his family farm near Adams, Minnesota, where they raised their six children. He enjoyed farming and his John Deere tractor collection. He is known for being able to fix anything and made many useful items for his farm. They lived on their farm for most of his life. He was a loving husband and devoted father. He loved spending time with his family and always made Sundays special, like Mass and a Sunday drive. The rosary was a big part of Joe’s faith. He was a member of the Knights of Columbus and a lifelong member of the St. John’s Catholic Parish.

Joe enjoyed fishing, playing cards, and camping with family and friends. They took their children on many fun vacations. They made a point over the years to continue to get their family together, including his 90th birthday party at Padre Island. He always spent time and had interest in every grandchild, great and great-great. He had another get-together at their family farm with everyone camping and celebrating his 90th birthday again.

After retiring in 1996, they would travel in their RV and visit their children. Joe and Audrey spent many winters in South Texas residing at the Orange Grove RV Park. They enjoyed the warm weather and made many wonderful friends from all over the U.S. and Canada. They were always excited when family came down to visit. He enjoyed woodworking in his shop and sharing things he made with his family. He continued sharing his projects with friends in Texas. Lots of friends and family have the special Crucifix that he made and signed.

Joseph had a positive attitude his entire life and always saw the good in everyone he met. He never had a bad word to say about anyone. He taught his children and grandchildren that you can work hard and play hard. He was a great example of devotion and love in marriage. Joe and Audrey had a full, rich life with good friends and relatives, and enjoyed spending time with them. He was so proud of his family of 96, keeping track at every birth, and having a five generations family. Joe and Audrey just celebrated their 69th anniversary in June.

Joe took ‘until death do we part’ very seriously, loving and taking care of his wife with Alzheimer’s for many years. Audrey is lost without him, even though he was just this guy who smiled and said to her ‘God Loves You and I Love you too’ every single morning for years.

Joe was preceded in death by his parents Joseph and Theresa Schneider; brothers and sisters-in-law: William and Margaret Schneider, Paul and Dorothy Schneider, Leo and Martha Schneider, Marlene Sterling; Sisters and brothers-in-law: Elizabeth and Gilbert Fasbender, Angela and Sylvan Winkels, Anna and Joe Jax, and Mildred and Marvin Simon.

A funeral Mass will be celebrated on Monday, October 3, 2022, at 10:30 a.m. at St. John’s Catholic Church, Johnsburg, Minnesota with Father Antony Arokiyam officiating. Interment will be in the St. John’s Catholic Cemetery, Johnsburg, Minnesota. There will be a rosary at 2:45 p.m. at the Adams Funeral Home on Sunday with visitation to follow from 3:00-6:00 p.m. and a Prayer service at 6:00 p.m. Visitation will also be at the church on Monday from 9:30-10:30 a.m.