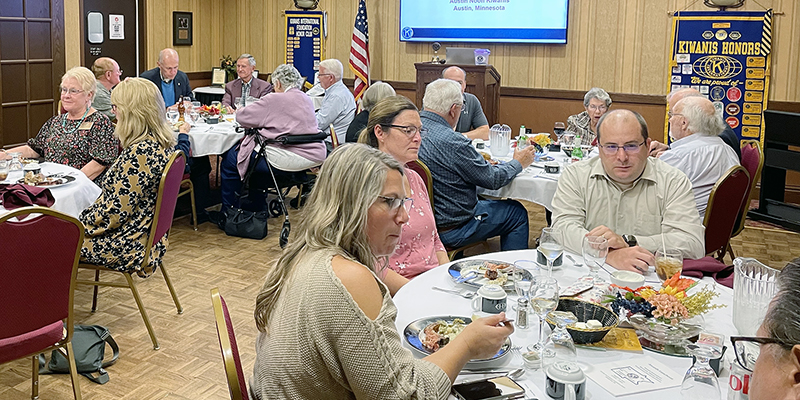 To trace one’s history of service back through the last 100 years is a testament to those countless citizens who have given of their time as part of that service.

That is what the current members of the Austin Noon Kiwanis can stake in the ground as the group has recently celebrated 10 decades of service. The current group of 17 members marked the occasion on Wednesday, Sept. 21, at the Hormel Historic Home.

The night was punctuated by fellowship and remembrance as it looked back over the span of all of those years.

Since 1922, Kiwanis has been a part of raising up the community of Austin, however, its prerogatives have certainly changed since those first years.

While Noon Kiwanis is now an organization that works toward the benefit of children through a number of different programs, in the beginning it was largely a social group made up of men whose scope was focused on smaller benefits like improving the bathrooms at the courthouse.

“It was a lot of businessmen,” McDermott said. “They met for an hour, I think there was probably a lot of networking. It was just a men’s group. Women weren’t involved in that kind of stuff. They sang a lot and had lunch.”

However, over the years that vision has shifted. In a lot of ways, networking is still an important part of the organization, made much simpler by advances in modern technology — internet and email.

Internationally, Kiwanis has focused that vision on the betterment of children, while at the same time keeping that familiar feel of camaraderie.

“It’s still networking and it’s still socialization,” said Secretary Laura Tjomsland, who also serves as lieutenant governor for Division 6 of the larger Kiwanis collective for the Midwest, which in this case covers Minnesota and both North and South Dakota. Her division reaches from the Wisconsin border to the South Dakota Border “Because we develop relationships with people that maybe we wouldn’t have developed relationships with.”

By bringing people together from all walks of life and backgrounds, Noon Kiwanis has been able to boast an array of programs to support including, but certainly not limited to, the annual Cub Scout Pinewood Derby and partnership with Parks, Recreation and Forestry to host the annual track and field events held during the summer.

Noon Kiwanis has also benefited from a very giving community, even if that doesn’t necessarily mean serving in service groups like Noon Kiwanis.

“The generosity of the community has been heart-warming,” McDermott said. “People want to give and people want to be part of that stuff but maybe don’t have time to commit to doing the service things.”

The benefits of community collaboration is visibility in a public that knows that Noon Kiwanis will be there when needed.

“Our purpose is serving the children,” Tjomsland said. “Of course our focus is the children of Mower County. When we go to the summer track and field that we co-sponsor with Parks and Rec, people say to you, ‘I’m so happy you’re doing this.’”

Noon Kiwanis has definitely left its mark on Austin in its century of existence. The first Sugar Shack at the Jay C. Hormel Nature Center bore its name and it’s had a lasting partnership with the Salvation Army.

All of this has contributed to a deep understanding of Austin.

“We’ve had ministerial people who belong and they certainly bring a different perspective on things too,” Tjomsland said. “It’s making us all aware of what the community has to offer as a whole.”

However, underneath the success of serving Austin is a challenge that most every service group is dealing with — declining numbers.

It’s a trend that’s been happening for a while, but events in the last five years has in some ways accelerated the issue.

Like many groups, Noon Kiwanis closed down during a length of the pandemic, and when they started meeting again, many did not come back.

“I think they got comfortable,” McDermott said.

“I belong to a small country church and it’s really been tough,” she said. “Regularly we would have about 50-60 in that number. Now we’re having like 28. People just got accustomed to not going out.”

That left Noon Kiwanis and other groups with the larger question of where do things go from here? There is still a need for Noon Kiwanis in the next 100 years, but it will have to confront the issue of dwindling numbers in the meantime.

It’s a question, both Tjomsland and McDermott confess has no easy answer.

“It’s been one of those things that I have personally reflected on,” Tjomsland said. “Most of the clubs that I visit in my district meet at noon. To try to have someone committed to belonging to service club that meets at noon is tough.”

In years past, both have noted that meetings usually saw people showing up early or staying later for the social aspect, but in a world that continues to seemingly speed up, that’s getting harder and harder.

McDermott herself remembers when she was in education it was expected of her and other principals that they be part of a service club.

“I probably never would have considered joining Kiwanis except the superintendent I first worked for said every principal will be in the service club,” she said. “We want to make sure we have every service club in this community covered because they knew service was good for their people, but they also knew this is a way to get educators out into the community and know what’s going on.”

Out of this has come a new urgency in making sure all aspects of Austin are reached in the hope of boosting numbers and getting people involved.

“That’s something we’ll have to develop a focus on,” Tjomsland said. “Look at what we’ve done in 100 years and in order to keep doing this we need your support.”

“And make sure we’re touching all of our community,” McDermott added.

To that end, both McDermott and Tjomsland and the rest of Noon Kiwanis members are urging people to look at the difference people coming together can accomplish.

“As one it’s very difficult to change,”McDermott said. “As many it’s easier to make a difference. I think that’s your selling point. What do I do to change the world? Together we can impact more change.”

At the very least, members invite people to come to a meeting and check out all of contributions Noon Kiwanis is making for the community in a bid to continue the legacy forward for another 100 years.

“Come and try us out,” Tjomsland said with a grin. “We do have a lot of fun.”