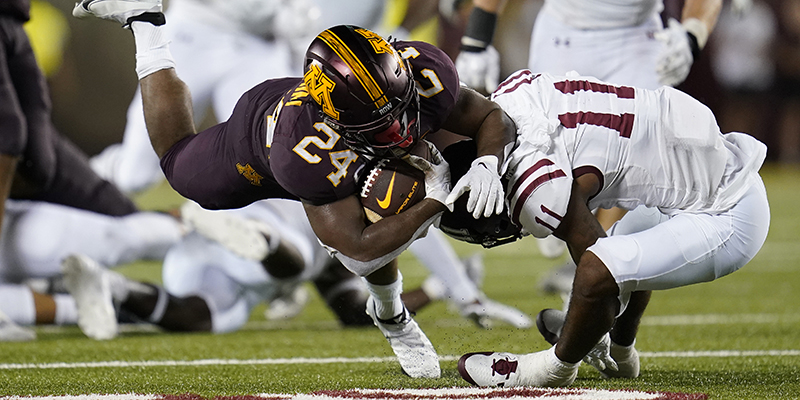 Minnesota running back Mohamed Ibrahim, left, is tackled by New Mexico State defensive back Dylan Early during the first half of an NCAA college football game Thursday, Sept. 1, 2022, in Minneapolis. (AP Photo/Abbie Parr)

MINNEAPOLIS — At first, Mohamed Ibrahim believed his injury in last year’s opener was just a cramp in his calf muscle, a seemingly minor setback the Minnesota star could brush off like a would-be tackler.

By the time Ibrahim reached the locker room that night, while the Gophers were pushing a potent Ohio State team in an eventual 45-31 defeat, he was informed his recovery would require much more than some stretching and hydration.

The torn Achilles tendon in his left leg, vividly revealed for a national television audience in super-slow-motion replay, ended his 2021 season as it was just beginning. His career with the Gophers was widely assumed to be over, too.

There were still several chapters left in this story, as it turned out, for the Baltimore native who was part of coach P.J. Fleck’s first recruiting class at Minnesota. The way Ibrahim approached the months that followed made quite an impact on his team, perhaps as much as the 262 yards and four touchdowns he has racked up over 44 carries in the first two games.

Going into the game against Colorado on Saturday for the unbeaten Gophers, Ibrahim has 37 career rushing touchdowns — three short of all-time program leader Darrell Thompson.

“Getting better every day as a person before I’m even thinking about being a football player, that’s what I’m most proud of,” said Ibrahim, whose decision to return for a sixth year was matched by quarterback Tanner Morgan, center John Michael Schmitz and wide receiver Chris Autman-Bell.

Rolling around on a scooter to keep the weight off his surgically repaired leg, Ibrahim maintained his captaincy and came out for the opening coin toss as the Gophers endured several more injuries in their backfield but managed to finish strong with a 9-4 record.

“He learned how to coach the running backs, not just be a running back, served and gave to his teammates and never made it about himself,” Fleck said.

Ibrahim dived into Achilles tendon research and was heartened to learn that late NBA great Kobe Bryant once suffered that injury, his favorite basketball player serving as posthumous inspiration. Ibrahim leaned on his mother and his Muslim faith for encouragement and support.

Then there was his friend, teammate and backup Trey Potts, who exactly one month later endured his own devastating injury — the nature of which the Gophers have never disclosed out of respect for his privacy. Potts was hurt badly enough to require a six-day hospital stay in Indiana after the game at Purdue, putting his football future in obvious jeopardy.

“He had a hard decision to make, and when he made it, we were just together the whole time. We were just locked in. It was more than just football,” Ibrahim said. “Anything he ever needed, I always had him.”

The Gophers have not made Potts available for interviews since then, but his decision to follow Ibrahim’s lead and return to the field this fall provided another source of inspiration for this mature team that Fleck has repeatedly praised for its connectedness.

“It’s first and foremost a very important lesson for everybody to learn from those two guys about how to respond from two very adverse situations, how to come back,” Morgan said.

During those “dog days” of preseason practices last month, the way Ibrahim felt physically told him he was all the way back — without restriction or hesitation.