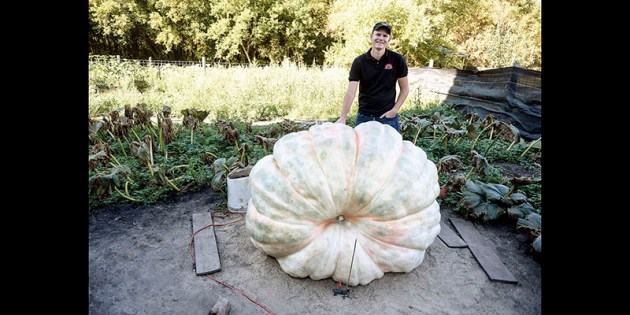 Tanner Conway stands next to his around 1,800 pound pumpkin that he is taking the Stillwater Harvest Festival this weekend. Eric Johnson/photodesk@austindailyherald.com 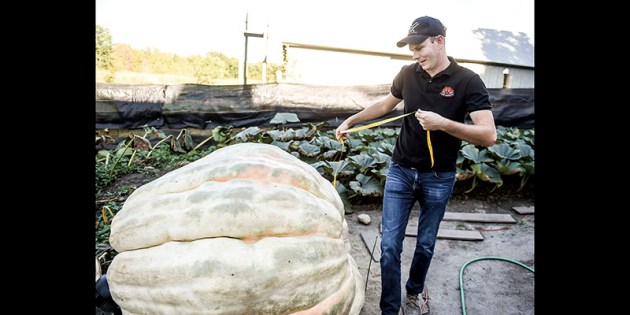 Tanner Conway demonstrates how he measures the size of the pumpkins he grows. This latest one is around 1,800 pounds. Eric Johnson/photodesk@austindailyherald.com 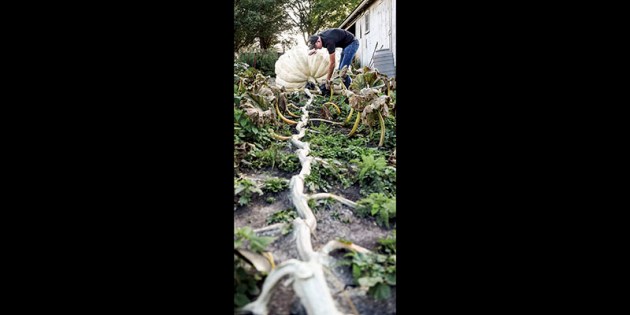 Tanner Conway checks out the condition and progress of the massive pumpkin he will be entering for contest at the Stillwater Harvest Festival. Eric Johnson/photodesk@austindailyherald.com 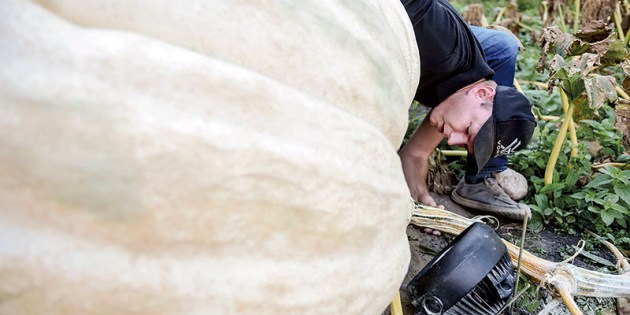 Tanner Conway checks the dryness of his pumpkin, weighing around 1,800 pounds, which he is entering into the contest at the Stillwater Harvest Festival. Eric Johnson/photodesk@austindailyherald.com

Tanner Conway hoping pumpkin is off the charts

Tanner Conway is no stranger to big pumpkins, but even he’s looking at his latest gourd growth with a new kind of awe.

Growing behind a barn at a friend’s house in rural Mower County, the pumpkin is growing to almost an unreal size, likely surpassing most every pumpkin he’s grown to date with an aim of taking the top spot at the Stillwater Harvest Fest on Oct. 8-9.

“This pumpkin is just under 1,800 pounds and growing about eight pounds a day,” Conway said, as he took blankets off the pumpkin. “I’m estimating 1,800 to 1,850 pounds. I’m hoping for a one ton fruit. It’s equivalent to running a four minute mile. It puts you into the elites of growing pumpkins.”

Everything about the pumpkin is on a large scale. The pumpkin, of course, sits front and center in the patch, but the vines of the patch itself spread out thick and wide and the vine the pumpkin is attached to reaches to around 15-20 feet and at places is as thick as a human arm.

This year Conway started with four pumpkins of the Dill’s Atlantic Giant variety from Spain. However, he eventually whittled it down to just this one to take to Stillwater, which currently has a circumference of just under 200 inches.

And it seems like he picked the right one as it took to growing at an astounding pace at 38-42 pounds a day early on.

“I have a shot at a serious contender,” Conway said.

Conway admits that to get to 2,000 pounds would be exciting, but it would still put him a ways off the world’s record of 2,703 pounds and even that’s not the biggest with another pumpkin coming in at hefty 2,908 pounds, however, that is unofficial given that the pumpkin was cracked and thus disqualified.

While Conway is enjoying the fruits of his labor, so to speak, it’s not so easy as planting a seed, watering and waiting for it to get big. Conway has spent hours at the patch and devised a complicated system of caring for the pumpkin using an array of fertilizers, insecticides, fungicides and a two-tank watering system that allows him the ability to control how he waters the pumpkin.

All of this has come from around 15 years of experience growing pumpkins that dates back to when Jim’s Superfresh used to host a pumpkin-weighing contest.

“This is the biggest one to date,” Conway said. “It’s cool.”

“It’s almost like a game of chess,” he added, describing the process of caring for it. “You always have to stay one step ahead.”

Those steps started when the seed was planted on April 17 and was pollinated on June 25. In total the pumpkin has been growing for around 90 days now. To help get it to that point, he’s been using a lot of fish and seaweed supplements by sponsor Two Mikes Green Fin Plant Care to help grow the pumpkin.

“I got pushed a lot by just organics this year,” Conway said.

With Stillwater close on the horizon, the time is coming for one of the most stressful part of growing the pumpkin — moving it.

Conway uses a special lift consisting of eight straps that cinch around the pumpkin with  a rope that grows tighter and tighter as it’s lifted. Once it’s off the ground a little bit, a pallet is slid underneath and the pumpkin is tied off.

He’s had pumpkins roll off before, but luckily they never broke. Still — lesson learned.

“You always tie it off,” Conway said.

“Mother Nature really rules all,” Conway said. “There are so many things that can go wrong.”

When everything is all said and done, Conway will be faced with what to do with the pumpkin. Far too dense to be used for the common things pumpkins are used for, including baking, Conway is looking at doing something a little different. Hollowing it out and using it for a Christmas card for he, his wife and the couple’s dog.

And while others use it in different ways, Conway’s push is much more pure.

Like Conway, who started growing pumpkins when he was young, he hopes that this is something other kids will pick up.

“Get a kid growing a pumpkin, they are going to learn patience quicker than anything else,” he said.