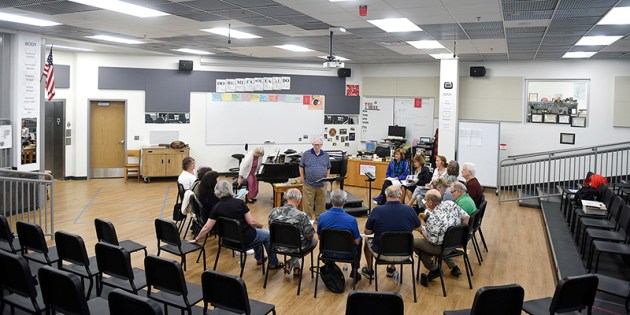 Former Austin High School choral director Dick Larson and members of the Class of 1971 come together in the choir room of Austin High School for a rehearsal in August. The rehearsal was in preparation for a special performance at the class reunion which was held at Austin Country Club and at the heart of the rehearsal is the 1921 Steinway B grand piano. Eric Johnson/photodesk@austindailyherald.com 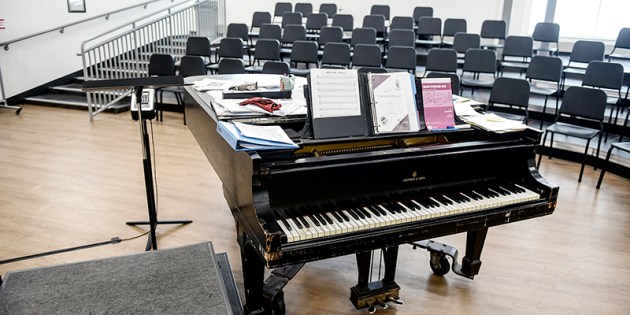 The Steinway B Grand Piano, currently housed in the choir room of the AHS Annex. An effort is being made to raise money to refurbish the 100-year-old piano. Herald file photo 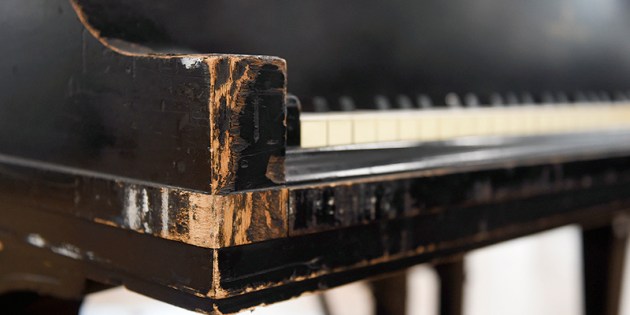 The years of wear are evident on the Steinway B, used at Austin High School. Funds are currently being raised to refurbish the historic grand piano. Eric Johnson/photodesk@austindailyherald.com 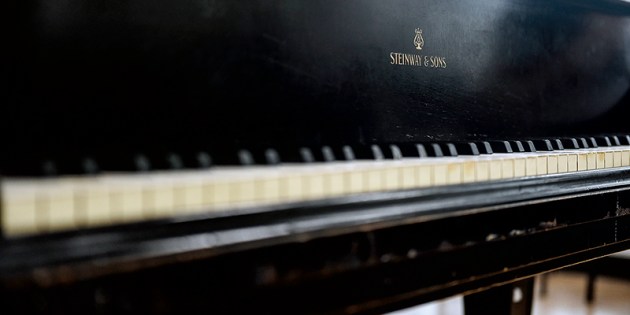 The Steinway B Grand Piano still carries a good tune after 100 years, but both visually and mechanically requires an upgradee. Eric Johnson/photodesk@austindailyherald.com

With an already famous piano in its midst, Austin High School Choir Director Kalle Akkerman is laying plans to bring another important musical instrument up to speed.

This time, it’s a 1921 Steinway B Grand Piano, currently anchoring the choir room in the Austin High School Annex.

The piano has seen plenty of years tick by, coming to the district the same year the current high school was built. Prior to its current location, the piano spent nearly two decades in Knowlton Auditorium.

However, the piano, which Akkerman said still holds a good sound, is representative of its years.

“It needs about $35,000 worth of work,” Akkerman said Wednesday. “The mechanicals all need to be replaced.”

Visibly, the ivory piano keys are showing chips and cracks and the frame is made of worn and tired wood, which will also be refurbished when the project is completed.

Akkerman said that Robert Linton of Classic Piano Restoration will be handling much of the inside workings, while North County Refinishing will handle the piano’s case. Akkerman said he hopes to ship the piano out in mid-October, but because of the work that needs to be done, it could be as far out as summer before the piano comes back.

However, to refurbish the piano it will require the school to raise money. It received a $10,000 seed grant from The Hormel Foundation, and since that money came in, more donations have followed.

A fundraiser is also being planned for Friday, Oct. 7, in the Hormel Historic Home’s Peace Garden, starting with a happy hour at 5 p.m., followed by live music featuring 507 Country, made up of three recent graduates of the AHS music program, at no charge.

Tickets for the event are $20 and include a chicken, steak or shrimp kabob and can be purchased at www.hormelhistorichome.org and at the door, while supplies last.

Beverages and additional kabobs will be available for purchase.

There will also be a silent auction during the night, along with a drawing, which can be purchased at the door.

While the piano’s refurbishment comes at a hefty price, Akkerman said it’s worth it to have such a fine-sounding instrument contribute to the lasting impression left by music at AHS.

“It still sounds great,” he said. “It’s a challenge to play, but it still makes good sound. (Steinway) figured it out early.”

The Steinway has clearly endured the ages well and continues to put forth a consistent tone quality. With a price tag for a new Steinway reaching as high as $90,000, refurbishing it is a more cost-efficient approach.

At the same time, this is a musical instrument that has been touched by the past. Notably, stars such as Phyllis Diller and Victor Borge have played this very Steinway, along with several other notable, world-renowned pianists.

“This is Austin history,” Akkerman said. “This piano in this room is important. For all of the graduates from this music program, it speaks to the level of music education.”

At the same time, Akkerman said that it is incredibly touching to know there is community support for projects like this.

“It means a lot,” he said. “We’re all very blessed here in Austin to have these kinds of things. We all love music and we want to see musicians grow.”