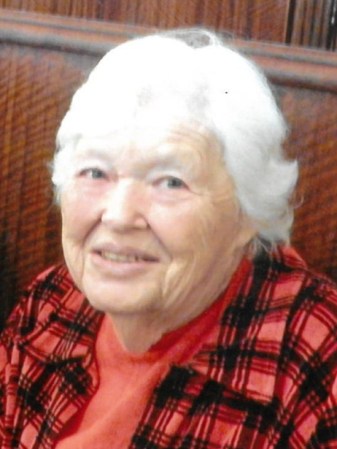 Dona Jean Ziegler, age 93, formerly of Lyle and Owatonna, Minnesota passed away peacefully on Saturday, September 10, 2022, at St. Mark’s Nursing Home in Austin, Minnesota. Dona Jean Johannsen was born April 13, 1929, in Freeborn, Minnesota to John and Marjorie (Ayers) Johannsen. She attended Freeborn and Lyle Schools and graduated from Lyle High School in 1947. She was a Lyle telephone operator from 1945 to November of 1948 when she married Donald Dean Ziegler at the family farm NW of Lyle. They farmed the Ziegler Farm in Stacyville, Iowa until 1959 when they bought Dona’s parents farm in Lyle. For health reasons they moved to Owatonna in June of 1968. Dona was a member of Union Presbyterian Church near Stacyville, Iowa for 26 years until the church’s closing in 1974. In March of 1996 the couple moved back to Lyle, and until present day led the restoration project of Union Presbyterian Church, a closed church on the National Register of Historical Places. Dona was a current member of Westminster Presbyterian Church in Austin, Minnesota. Dona enjoyed her family, genealogy, ceramics, photobooks, dancing, camping, old time music, and making homemade bread. She worked many years as a bookkeeper. Dona was very honored to have been chosen as one of the Grand Marshalls for the Lyle 150th Celebration. She will be dearly missed by all that knew and loved her.

A Funeral Service will be held at 1:00 p.m. on Tuesday, September 13, 2022, at Westminster Presbyterian Church in Austin, Minnesota. Interment will take place in Union Presbyterian Cemetery, 4950 Lancer Avenue in Stacyville, Iowa. Memorials preferred to Union Presbyterian Preservation Fund. A special thank you to niece, Judy Himle, the staff of St. Marks, and Ecumen Hospice for all of their special care given to Dona in the last 13 months. Services prearranged and performed by Worlein Funeral Home of Austin. Worlein Funeral Home of Austin is assisting the family with arrangements. Condolences may be expressed to the family online at www.worlein.com.