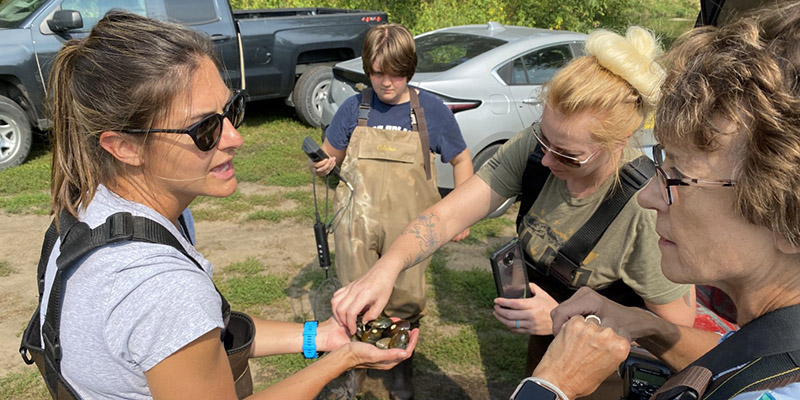 Standing in the Cedar River, Madeline Pletta was about to start walking upstream to drop native clams in the water when she spotted an old friend.

Pletta, a state mussels propagation biologist, spotted a black sandshell mussel on the bed of the Cedar River State Water Trail earlier this month, a few miles south of Austin. The clam was one of thousands that she and the Minnesota Department of Natural Resources’ mussels team from Lake City have placed in the Cedar in recent years as part of ongoing restoration efforts.

After a brief reunion, Pletta placed the mussel back in the water and joined her DNR colleagues in walking against the current to place hundreds of new mussels in the river at that site.

Overall, the DNR’s Center for Aquatic Mollusk Programs crew on Sept. 14 placed about 1,250 mussels – a mix of black sandshells and muckets – at the team’s three study sites on the Cedar River, going from Austin’s south side to a couple of downstream locations in Austin and Lyle townships.

“It’s always a great day when we can get in a river and add native mussels,” Pletta said. “Mussels bring an array of benefits to a river, and they will help revive the water quality and aquatic habitat of the Cedar River.”

About 200 of the recent mussels came from the Minnesota Zoo – thanks to Austin native Ben Minerich, a mussels biologist at the zoo – with the rest coming from the DNR’s fishieries facilities in Waterville, Minn.

To date, the DNR now has placed 6,818 native mussels in Mower County’s Cedar River, with the vast majority of those being black sandshells. The DNR also reintroduced mussels to the Cedar in July 2019 and October 2020.

This DNR mussels work is funded by the state’s Legislative Citizen Commission on Minnesota Resources (LCCMR).

“We are really grateful for the strong partnership we continue to enjoy with the DNR mussels team and for their extensive efforts to improve the Cedar River,” said Tim Ruzek, the water plan and outreach coordinator for the Cedar River Watershed District in Austin.

This fall, Austin’s Jay C. Hormel Nature Center in collaboration with the DNR and watershed district plan to unveil a new exhibit in its interpretive center on mussels, their history in the Cedar River and the DNR’s efforts to revive them.

Mussels serve as filters in a river to support water quality, provide microhabitats for smaller aquatic creatures like invertebrates and stabilize the river bottom. DNR surveys show, however, that the Cedar and other rivers in Minnesota’s southern one-third no longer support their historical assemblages of mussel species.

Since 2016, the DNR has worked on growing native mussels in Austin’s East Side Lake – which is a stretch of Dobbins Creek, a Cedar River tributary – that later are taken out and placed in the Cedar River along a nearly 15-mile stretch between Austin’s downtown dam and the Minnesota-Iowa border.

One of three watersheds chosen by DNR for this work, the Cedar’s three sites offer a diversity of habitats for DNR researchers to study where mussels survive best.

In late August, Pletta and her colleagues also conducted their second-straight year of surveying the Cedar’s three sites to locate and measure mussels – work that involves some crew members using scuba gear.

After two survey years, the DNR is pleased with how the mussels found at the sites are growing and moving in the river, Pletta said.

Overall, the DNR hopes to restore seven species of mussels in the Cedar River, Pletta said.

Austin was known in the 1890s and early 1900s as “Pearl City” for its abundance of freshwater mussels but they became over-harvested by people for making buttons and jewelry, especially for the rare pearls found in some. Pollution in the Cedar and its tributaries long ago also factored into the decline of local mussel populations. Black sandshells, for example, only had been found in recent years as dead shells in the Cedar River in Minnesota and its streams.

In Minnesota, it is illegal to collect live mussels and possess the shells of dead mussels that are state-listed species.

Freshwater mussels can live for several decades and, in some cases, a century or more. They provide critical ecological services, such as structural habitat for other aquatic invertebrates and food for fish, birds and mammals.

Mussels filter suspended particles in water, including E. coli bacteria, and are considered “ecosystem engineers” because freshwater mussels modify aquatic habitat to make it more suitable for themselves and other organisms. They are sensitive particularly to habitat disturbance and pollution, making them excellent biological indicators of a river’s health.