What a rich and varied background Trish Harren brings to her position as Mower County administrator. Her warmth, her confidence, and her desire to serve others is evident.

Trish spent her childhood in Alaska. Her father was a commercial contractor and built hospitals, schools, banks, etc. Their family moved from location to location for each project. So, she lived in many different parts of the state from North Pole (it really is a town) to the islands of Southeastern, Alaska. She fondly recalls playing in tide pools, exploring the rain forests, picking wild berries, and watching the fishing boats come in each day with their catch. Meals consisted of clams, salmon, moose, bear, and crab fresh out of their own crab pots. Her family eventually settled in Anchorage and that remains home base. 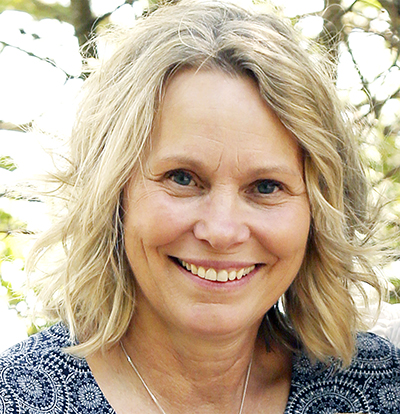 As a child, Trish would share time between two widowed grandmothers.  They were smart, hard-working women, who were strong in their faith, active in their communities, and just a little sassy. These grandmothers modeled that women could do anything.

Trish met and married her husband Mark Harren in Alaska. Shortly after their first child was born, they moved to Red Lake Falls, Minnesota, her husband’s hometown. Trish’s college background is in education with degrees in social science and English. She first taught in a Global Studies program teaching English to students from 50 different countries. When that program ended, she took a job in alternative education, first working with high school students and later working with incarcerated adults.

She did her graduate work through St. Mary’s University, earning a Master of Science in Human Development. Her focus was Leadership and Organizational Development.  She noted that, “engaged employees deliver the highest quality services and products.” The bottom line, according to Trish, is that the most successful organizations are employee centered. This is true whether it is a fortune 500 company or a local unit of government.

Another less formal, but equally formative experience Trish had was during the years she and her young family spent at Laketrails Base Camp, on Oak Island, Minnesota. Her husband had been a camper there as a young person and when he returned as an adult, found it in disrepair. He and Trish re-energized the Board of Directors, organized a capital campaign and contributed their work to rehabilitating the camp. They became camp directors and spent the next seven summers running the camp. One camp session during their first season they were short-staffed and needed a second guide. Trish had never been on a canoe trip. She was also still nursing her baby.  But there was no choice, so she took her breast pump along and did the trip.  She learned to paddle and even stern a canoe and came back with a new confidence that having survived that trip, there was nothing she could not do.

Trish’s career in public service grew out of a volunteer opportunity to assist in writing a grant proposal to create a victim service for Roseau County. When the grant was awarded, she was asked to run that program. The grant required an advisory board that had to have county commissioners on it. When the county decided to create their first county administrator position, they invited her to apply. She served in that pioneering role for seven years and then five years for Itasca County.  When her youngest child was graduating from high school, she decided to take some time off. She volunteered, traveled, got her yoga teaching certificate, and opened a yoga studio.  However, she soon realized she missed public service.

So, she looked for postings for county administrator positions, and saw Mower County had an opening.  She applied and was hired and has been here for three and a half years ago. Trish has felt surrounded by support since day one, with programs like Leadership Austin and the Newcomers Program helping her get to know the area.  She sees this as an unusually collaborative community which multiplies the impact of any initiative. She characterizes her board and the county staff as amazing to work with; really committed to making a difference.

Trish has four grown children and eight grandchildren.  She says, “Being a parent is the greatest impact you will ever have.”

As to her philosophy of life, she says “Look for the best in people, and you will find it.”  What an asset we have in our county with the leadership of Trish Harren.

For more information about the Austin Branch of AAUW, contact Sue Grove  sue.grove@riverland.edu  or Carolyn Bogott  csbogott@gmail.com. The American Association of University Women, now AAUW, is open to anyone who has completed a two-year degree or beyond.  AAUW welcomes men who support our objectives and there are student memberships available. AAUW has been empowering women since 1881.  We support equity and education for women.  Scholarships are offered, as well as help in litigation in cases dealing with sex discrimination.  We are the most important and highly respected research and lobbying organization dealing with women’s issues such as equal opportunity and job equality.

Ask A Trooper: Call 911 if you see a road hazard

Annie Lane: Coping with allergies around the holidays