Being Proactive: Mayor, Planning/Zoning hoping room can be found in budget for housing inspector 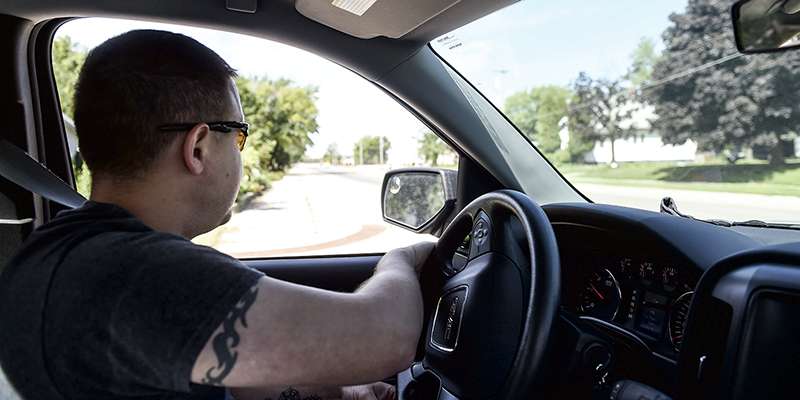 Austin’s zoning inspector Brent Johnson pulls up to a dilapidated home in northeast Austin. If the city is able to hire a housing inspector then Johnson and others believe the city can be proactive rather than reactive when it comes to property complaints. Eric Johnson/photodesk@austindailyherald.com

On Thursday morning, Austin’s lone zoning inspector Brent Johnson drove through a portion of northeast Austin, looking for dilapidated homes or homes in need of improvement.

A couple simply needed new shingles, others were in sorrier shape.

Johnson’s job, in part, requires him to inspect these properties and attend to complaints brought to his attention by the public. It’s something that those working in the Planning and Zoning, along with Mayor Steve King, are hoping a new addition to staff can help.

As part of this year’s budget discussions, King is pushing the approval of a housing inspector that not only would field these complaints, but begin a proactive approach to dealing with blighted properties that are in violation of city code.

“All of those violations are left up to citizens to report. It’s complaint based with neighbors and citizens calling in,” said King, who added a majority of complaints he receives are related to uncared for properties. “It can be uncomfortable for neighbors to report neighbors.”

King said that the city gets a little over 600 complaints every year and that can be a burden on Johnson who can only contend with so many at a time.

It’s a situation that can easily put Planning and Zoning behind the eight-ball when dealing with the upkeep of properties.

Many houses, like this one in northeast Austin, can bring down property values, but homeowners who are encouraged to take care of their home can have the reverse effect. Eric Johnson/photodesk@austindailyherald.com

“I would say right now, probably 30 to 40% of my time would be housing,” Johnson said. “But I’m reactive when it comes to property. It would be nice to have more time, but I’m just myself.”

King envisions the position, should the City Council approve it, would be such a proactive position, with the person hired going out into the public and approaching homeowners.

The position, when including things like wages and insurance, would cost the city around $80,000 and would account for a 1% rise in the levy.

Currently, council members are looking at keeping the levy around 4 or 5%, but from King’s point of view, the position is worth it considering that dilapidated properties cost the city $14 million in missed property tax revenue every year.

“Every council member when they are asked what their top two or three issues are, it’s housing,” King said. “We can’t just think of new housing. We have to maintain existing housing. Losses are a little over $14 million a year because values are going down.”

Housing over the last few years has come more and more to the forefront of council priorities. Part of the housing dilemma will be satisfied by the apartments being built at the site of the old YMCA building, with another apartment complex pitched for property across from the Post Office.

However, a recent study by the Counselors of Real State for the city indicated that existing housing also needs to be part of the equation.

In May, in a presentation to the council, the CRE group in charge of study indicated that in the past 10 years new family home construction has been just 1%.

That puts an increased importance on maintaining existing properties. According to Holly Wallace, administrator of Austin’s Planning and Zoning, several homes in Austin have been built in 1980 or before, including several properties that are close to, if not over 100 years old.

Not keeping up on a property or maintaining the property can have an exponential effect.

“There is just that domino effect whether it’s good or bad,” Wallace said. “If you have a blighted property it’s going to start affecting other properties around it. It just does. Also the other is when a property is improved. It can have the same domino effect.”

The housing inspector position would be able to take the issue of blighted or downtrodden properties and be a central hub.

From this centralized position, not only would the person be able to approach homeowners about their properties, but point them toward resources that would help them take care of any house issues that have been earmarked. Where to get loans and how to work with contractors being among those resources.

“We would be doing things on a proactive basis instead of a complaint basis,” Wallace said. “I think just like our rental program, we create relationships and we have someone who can work with people on those specific issues versus who do I go to and what resources are available. This person would have all the information available.”

It’s also hoped that problems can be headed off before fines are levied or cases are taken to court.

At its base, King said he hopes that adding this new position will provide a path to not only maintaining existing properties, but to also help alleviate housing pressures. Even though the position would increase the levy by a percentage point, he believes it’s worth it to continue approaching the housing issue in a constructive manner.

“I think a 5% tax levy is reasonable and really we need to make an impact on existing housing,” King said. “We’re in a growth mode.”