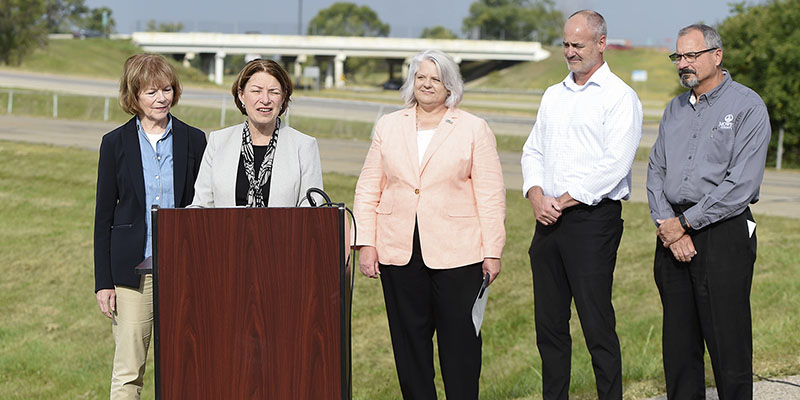 Senators Amy Klobuchar and Tina Smith were in Austin Friday morning to tout the $25 in INSFA funding for the upcoming MnDOT bridges project, slated to begin in 2024. Eric Johnson/photodesk@austindailyherald.com

The extensive Minnesota Department of Transportation project to replace bridges spanning Interstate 90 in Austin, received a boost from the federal government.

It was announced this week that the project will receive $25 million in Infrastructure for Rebuilding America (INFRA) funding for the project that will replace or repair all bridges over I-90 starting in 2024. In total five overhead bridges will be replaced, along with two mainline bridges and one pedestrian bridge.

The project, estimated to cost $45-50 million, will likely stretch through 2026 and includes:

Senators Amy Klobuchar and Tina Smith were in Austin Friday morning to further highlight the funds, which represent the largest competitive grant awarded so far from INFRA.

A $3.2 billion supplemental appropriation has also been provided for INFRA in an increase of annual authorization.

“This funding for Interstate 90 is critical. It’s critical to boosting Austin’s local economy and connecting to the region,” Klobuchar said, standing alongside Smith just east of the 14th Street NW bridge, which when completed will sport Austin’s first roundabout. “We have a lot of traffic — we need these bridges to make people safe and to move commerce.”

Work in the latter portion of 2023 will include moving traffic on Interstate 90 to one lane in two spots in preparation for the projects with the Oakland Avenue West/Highway 105 site scheduled to be the first bridge worked on starting in 2024.

The INFRA dollars is part of the larger $1.5 billion Bipartisan Infrastructure Law for 26 transportation projects nationwide. This money, devoted to the bridges along the I-90 corridor in Austin, will help boost investment in both people and infrastructure.

“We are building things in Minnesota and around the country … and we’re seeing the results right here,” Smith said. “Infrastructure is really about investing in people. This is a major artery of commerce as well as making the community work.”

According to Minnesota Department of Transportation’s Deputy Commissioner Jean Wallace, the state could also see a residual trickle down effect from the federal funds that would allow the state to allocate more resources elsewhere in the state.

“The grant will also free up state dollars that can be used elsewhere,” Wallace said.

President Joe Biden increased funding through INFRA by 50% to help meet demand across the country. Over the next five years the Bipartisan Infrastructure Law will provide approximately $8 billion for the INFRA program, including the $1.5 billion in this round of spending.

“Today we are announcing transformative investments in our nation’s roads, bridges, ports, and rail to improve the way Americans get around and help lower the costs of shipping goods,” said U.S. Transportation Secretary Pete Buttigieg in an earlier press release. “Using funding from President Biden’s Bipartisan Infrastructure Law, we are able to support more excellent community-led projects this year than ever before.”

Sen. Tina Smith made a visit Friday to Nu-Tuk to learn more about the just over $2.2 million in EDA funding to help develop Creekside Estate. Eric Johnson/photodesk@austindailyherald.com

While the $25 million will certainly help with construction of the I-90 bridge projects, Austin City Engineer Steven Lang said it was currently unknown how much, if any, the funding would affect Austin’s spending on the project, which amounts to around $1 million in local spending.

The biggest chunk of that will be a sizable portion of Fourth Street NW from the bridge to 13th Avenue NW, the road between Subway and Kwik Trip, that the city is responsible for funding refurbishment.

Just this week, the city was notified that it would be receiving an investment from the U.S. Economic Development Administration to the amount of just over $2.2 million dollars, with the aim of boosting business and job growth, along with economic diversification efforts in Creekside.

City Administrator Craig Clark told Smith that the partnership between the city and Nu-Tek is a vital first step in further developing the 158-acre chunk of land on Austin’s north edge.

“They didn’t want to just locate a facility in town,” Clark said. “They wanted a partnership.”

The money received from the EDA will be used for further infrastructure development of the location, including extending the road further east with hopes of wrapping it back to the south to connect more fully to the 18th Avenue NW corridor.

“We think it’s a great opportunity,” said President and CEO of the Development Corporation of Austin. “Similarly, we would like see food, ag and bioscience, but it’s also a great site for local businesses.”

Smith told those at Nu-Tek that the Creekside development represents a new economic development strategy in Minnesota.

“My thinking is that it’s so much stronger,” she said. “It doesn’t all have to be in one place. You expand your options.”