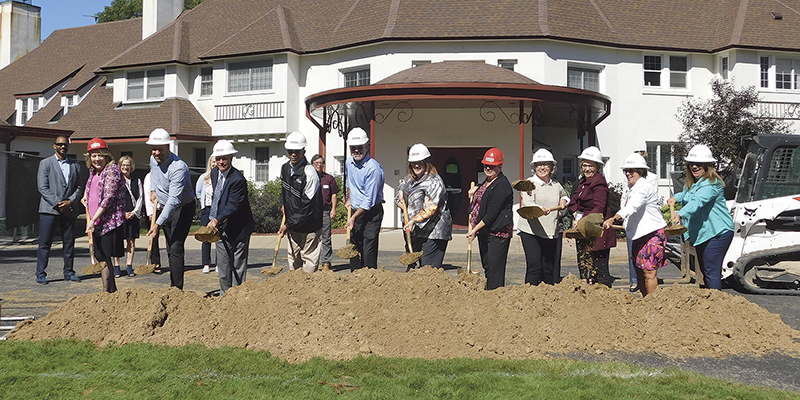 With the breaking of ground Monday, Nexus-Gerard Family Healing took a big step toward ensuring families are comfortable when visiting the site.

Officials broke ground Monday on the new Family Center, which will be built just off of the front door of the mansion for around $1.1 million.

Construction is largely expected to be completed around the beginning of February with some outside work likely completed in spring.

“With our program for kids and families, we’ve only had waiting room space,” said Executive Director Karen Wolf, who added that the current waiting room can easily fill with four, five families. “It’s difficult anyway and trying to visit in a busy space, it’s hard to have the conversations you need to have.”

In particular, having the parent partners also in the same area can be a boon for families, who are looking at next steps to best help their child.

Parent partners are also a new addition to Nexus-Gerard and help reinforce the efforts to guide families. Parent partners are parents who have been through much of what current families are going through and can lend a valuable hand in ensuring the child and the family get the best support possible.

“Sometimes when parents have been through the system, it might be harder to trust the institution,” Wolf said. “Parent partners help seek out resources.”

“It’s vital because sometimes a parent can feel very alone,” she said. “They don’t understand why their child has issues.”

This can also make a parent feel alone, something else the parent partners and the Family Center will be able to help with.

“They bring a normalcy to it,” Murray said. “They bring in the fact that you aren’t alone, there’s not something wrong with you. We’re in this together.”

The process of introducing the new building to the grounds began about three years ago when conversations started about what can be added to the facility.

For Wolf, there was a clear need.

“We were just having some conversations with our fundraising and development team,” she said. “What does Gerard really need? I was thinking big. We need a place for families to visit and spend time.”

Standing in the moment, preparing to break ground, Wolf said it was surreal to get to this point in the project.

“It felt really amazing to be able to bring this dream to fruition; to see it coming to life and knowing what a great addition for our families,” Wolf said.

In recent years, Nexus-Gerard has been able to continue to grow and offer more things. Wolf said that building Gerard is becoming more and more important to help families through a time that can be stressful.

“I think it can be isolating for the parents to have a kid in treatment because people don’t understand how it impacts the family system,” Wolfe said. “I think Nexus-Gerard Family Healing is focused on engaging families. Research demonstrates kids do better when families are involved.”

From Murray’s point of view, this most recent addition serves as an important reminder of the role Nexus-Gerard and other Nexus locations play in the process of treating mental health.

In particular, Nexus-Gerard has made the moves that allow it to adapt to the changing world of mental health and treatment.