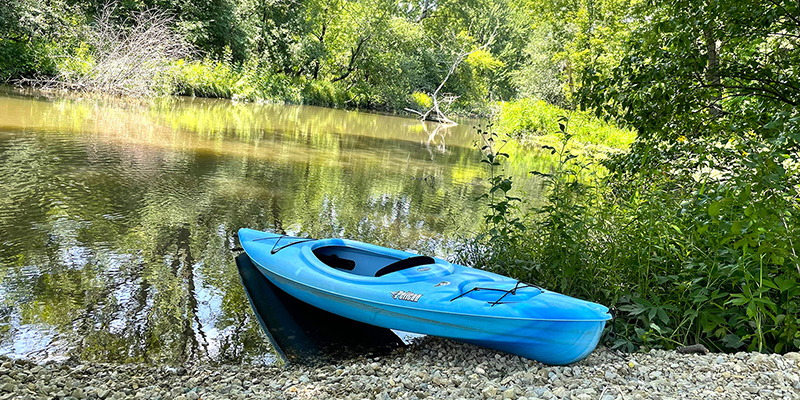 Ramp at Wildwood Park has been covered with rock, making it easier for kayakers getting launched onto the Cedar River State Water Trail. Photo provided

Paddlers seeking another option for access along the Cedar River State Water Trail now have a rock-surface landing for canoes and kayaks in an Austin park.

Within the city’s Wildwood Park, rock now covers a clearing along a Wolf Creek streambank that had been a dirt-covered slope with a mucky bottom about 500 feet upstream from the Cedar River State Water Trail. While the spot has been used by locals for launching onto and getting out of the river, the site typically is muddy, said Tim Ruzek, Cedar River Watershed District’s outreach coordinator.

CRWD pitched the idea for adding rock there to the Austin Parks & Recreation Department, which agreed to do that to make the spot more suitable for a small, walk-in access.

“We’re always looking at ways to enhance Austin’s incredible parks and trail system,” Merrill said, “and this access was an easy one to help people better connect to the Cedar River and the large, wooded area west of Todd Park.”

This landing on Wolf Creek – the stream that flows through Austin’s Todd Park – is just upstream from Interstate 90’s bridges over the Cedar River and a few blocks west of Hormel Foods’ Corporate North. Vehicle parking is about 250 feet east of the access on 17th Avenue Northeast, where it ends at Wildwood Park.

Ruzek has used the Wildwood clearing about a dozen times in recent years; the site for years featured a rope swing used for plunging into the creek. It’s part of one of his favorite Cedar River paddling routes: a nearly 3-mile, wooded stretch from Austin’s Ramsey Dam to Wildwood Park that includes numerous bends, frequent wildlife sightings and predominantly natural surroundings despite being in the city.

Most paddling trips that involve Wildwood start on the Cedar below Ramsey Dam, heading downstream about 3 river miles to the Cedar-Wolf confluence, where you then paddle upstream to the Wildwood access.

Paddlers also can use the Wildwood access for starting a trip. Once connected to the Cedar, you can float about one mile downstream to Austin Mill Pond downtown or – when the river current isn’t strong – paddle upstream to Ramsey Dam.

“It’s fun to paddle down to Austin Mill Pond but having the option to put in or get out at Wildwood is really helpful if you’re looking for a shorter paddle or wanting a more naturally scenic experience,” Ruzek said.

Earlier this summer, CRWD joined the Jay C. Hormel Nature Center staff in guiding a canoe trip from Ramsey to Wildwood with the Boys of Tomorrow summer youth program led by the nonprofit Austin Aspires. While the clearing on Wolf worked for getting the group out of the water, Ruzek said, it was a muddy experience.

“We’re just really thankful to Parks & Rec for being open to suggestions and working with us on projects,” Ruzek said.

CRWD and Parks & Rec in recent years also have collaborated on Todd Park’s rainbow trout fishery; native prairie and tree plantings in parks; special covers on city trash cans close to the waterways; litter grabbers for use on community cleanups; disposal of river-cleanup garbage; and the Herzog View naming and signage at East Side Lake.

Earlier this month, CRWD joined the City of Austin, Turtle Creek Watershed District and Austin Area Foundation in celebrating the completion of a large, walk-in access on Turtle Creek, another Cedar River tributary, in southwest Austin. That project involved much more work than Wildwood, with the city engineering staff designing the access and the Minnesota Department of Natural Resources’ trails crew constructing it.

That project came about from the city’s acquisition of a 1.5-acre, flood-prone property on the northwest side of the 12th Street Southwest (MN Hwy. 105) bridge. Numerous locals also enjoy floating Turtle Creek in Austin, including to connect with the Cedar River State Water Trail.