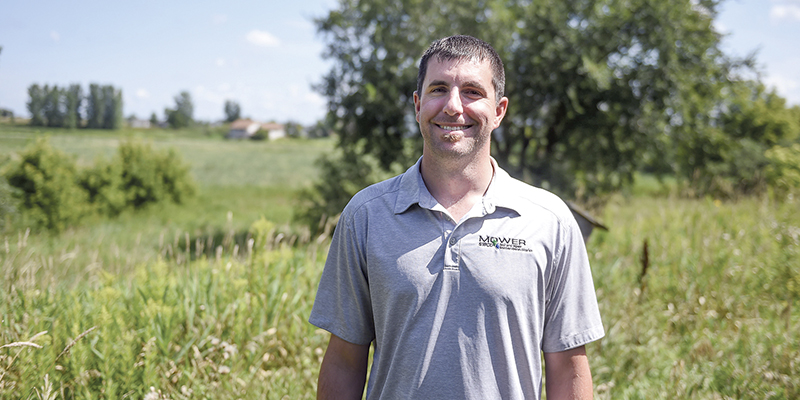 Cody Fox has taken over as district manager for the Mower County Soil & Water Conservation District and looks to continue a trend of positive relationships to effect positive change. Eric Johnson/photodesk@austindailyherald.com

New district manager for the Mower County Soil & Water Conservation District, Cody Fox, has no illusions about his new position.

He’s keenly aware of how high the bar has been set before him by his immediate predecessors.

“Bev Nordby, she helped build this office up. Then Justin (Hanson) took it and built it up even more,” Fox said Wednesday afternoon with a chuckle. “Now I’m here and to be frank with you I’m nervous. I was like ‘shoot, how much higher can this bar go?’ A lot of these relationships were formed long ago.”

But it’s these relationships that Fox will come to rely on, both in his co-workers and the landowners he’s worked with in the past as a project manager.

A people person by nature, Fox has come to realize just how important well-forged relationships are within the work conducted by SWCD.

“That’s probably the most fun part of my job, is developing these relationships and working with people to do things that work for them and work for us,” Fox said.

Fox is originally from New Ulm, but held a variety of jobs spanning from Iowa to North Dakota before coming to Austin in the fall of 2010 as a district technician, a position made possible by $3 million in funds provided by Vision 2020.

Cody Fox, district manager of the Cedar River Watershed District talks Tuesday morning during the announcement that agency received a grant from the Minnesota Pollution Control Agency for $78,000. Eric Johnson/photodesk@austindailyherald.com

Fox’s job included handling flood projects, engineering projects and water quality products, but again it was the people he came to work with that provided the solid foundation for Fox to truly enjoy what he was doing early on.

“For me, honestly, I don’t know if I would find as much enjoyment in another office,” Fox said. “What we do and the people that make up this group and this whole building — we have a lot of team players and we really have a fun time doing our job.”

Again, it comes back to relationships and Fox’s bread and butter was getting out and working with the landowners that allowed him to pursue the projects he’s been able to work on within the county.

While the projects are important, it’s the people behind the projects that have really helped Forge these products in being beneficial to Mower County.

“I could tell you just about who owns what land, who rents it, where the creek goes,” Fox said. “For me, it’s working to develop relationships and then working to do something — let’s be honest it’s not easy to sell somebody on that. The fact that we’ve had flexibility in our programs has been awesome.

And that’s where the prior work of Norby and Hanson have been so important. They established  a path that Fox and others have been able to successfully follow to achieve goals within the SWCD. Something that doesn’t always work elsewhere; where trust has been damaged.

“It’s hard to get that trust back,” Fox said. “The average age of farmers is 60-65, maybe more. They’ve been around. You wreck that relationship and they don’t come back through the door. That might spread to neighbors.”

The Mower SWCD has been able to do the opposite and the success has shown.

“We work on so many things, some things take so long to get developed,” he said. “If you do a good job with one person, somebody else sees that and that kind of grows and I think that’s where we are at a little bit to some extent right now.

Fox looks forward and sees a busy future ahead, a future that could include some big initiatives in the world of cover crops and carbon sequestration practices.

He said that it wouldn’t surprise him much if money for these things started being earmarked in future farm bills from the state legislature that could work to bring things more in line with states like Iowa, whose farmers have forged ahead with cover crop practices.

“There’s places in Iowa that have expanded over the last 10 years 10 fold,” Fox said. “How do we get there?”

The challenges will be selling more farmers on the practice so land plots won’t be as stressed by constant farming practices.

With the thought that cover crops could be the future, Fox said the SWCD will work to be ahead of the trend so they are ready for whatever comes down the pipeline. They will forge relationships.

“We want to be in line working with them,” Fox said. “Let’s just keep doing things and keep working together.”